I'm designing a boost converter that boosts a 9V battery to about 10.5V. The objective is to maintain 10.5V despite the V_in reduction due to battery dissipation, e.g. boost 6V to 10.5V. This boost converter works great under steady loads such as when I hook a resistor from V_out to GND. The problem arises when I hook it up to the desired load which is a cellular modem. This modem draws somewhere around 100mA for normal operation but when transmitting it jumps to about 1.2A for 500ms at a time. This causes a massive ripple (really a dip) in my output voltage to as low as V_in. The minimum input to the modem is 8V before it shuts down so these ripples often cause the modem to restart.

Below is my schematic and board design using the LM2731 boost converter IC. 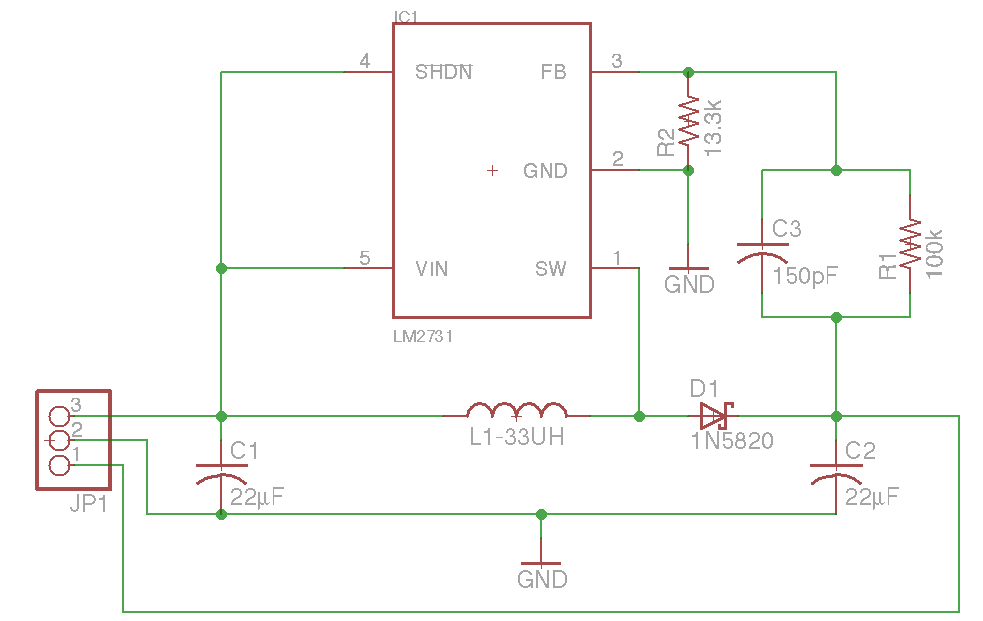 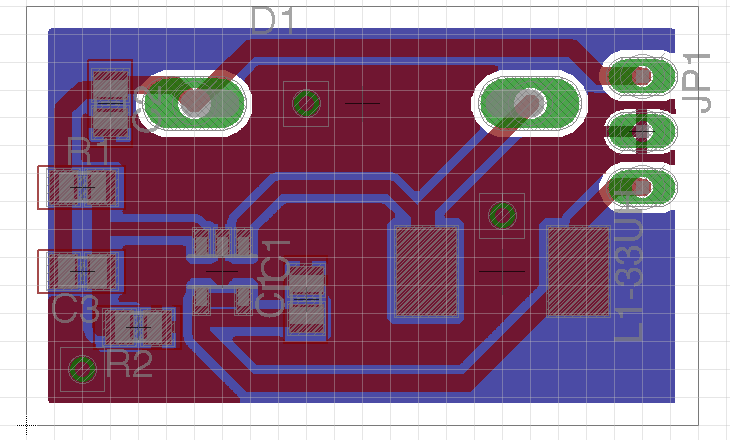 I've tried various inductances (10uH, 22uH, and 33uH) and they all yield the same result. I've also increased the ceramic output capacitors with only a marginal increase in stability. For fun I tried a 1000uF electrolitic between V_out and GND and that helped keep the modem on but still yielded ripples on the order of 1 to 2V which I'd like to reduce to the several hundred mV range.

Does anyone have any insight into how to reduce ripples with short bursts of draw?

Look at the spec for the device. There are two types; one switches at 1.6MHz and the other switches at 600kHz. Let's say, just to make life easier on folk reading this answer that it switches at 1MHz.

How much energy can it charge the inductor with - again the spec has the answer - maximum duty cycle is (on average between the two devices) about 90%.

Is this current going to supply the modem when it is taking 1.2A? No

What if the inductor was lowered to (say) 4.7uH? Current would be 9/4.7 which is approximately 2A however, the internal FET is only rated at 1.8A so it looks like you need to find a part that has more muscles.

The power output requirement is about 13W and if the switcher switches at a 1MHz rate this means an energy transfer per \$\mu\$s of 13\$\mu\$J. Knowing that this energy comes from the inductor means we can calculate peak current in inductor and its duty cycle.

Energy in inductor is = \$\frac{LI^2}{2} \therefore\$ peak current is \$\sqrt{\frac{2 \times 13e^{-6}}{1.7e^{-6}}}\$ which equals just about 4A. But, the topology of this type of switcher means that the inductor is only needed to transfer enough energy to raise the output level above the input voltage level. In other words the first 6V are a given.

How long will the inductor be "charging" for?

You're simply asking too much of that particular chip. Its switch current is internally limited to something on the order of 1.8A (or less, depending on duty cycle, temperature, etc.). As a rule of thumb, the switch current can peak as high as 2× the average load current — if you're drawing 1.2A, then the switch needs to be capable of handling at least 2.5A.

Not the answer you're looking for? Browse other questions tagged dc-dc-converter boost or ask your own question.