Inspired by this blog post, I decided to put together a simple ring oscillator that transitions through 3 different LEDs. My schematic is almost identical the one in the blog post except that I used 2N2222 NPN transistors instead of MOSFETs. However, the LEDs are not oscillating. All three slowly light up and then stay on. What am I doing wrong? 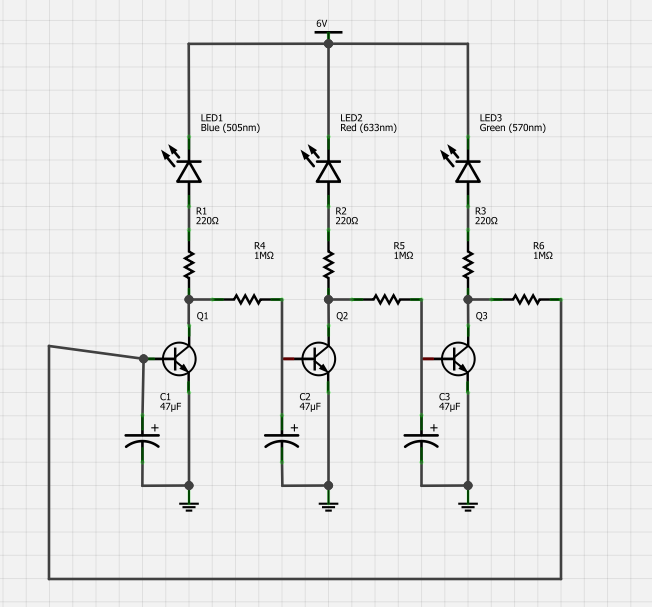 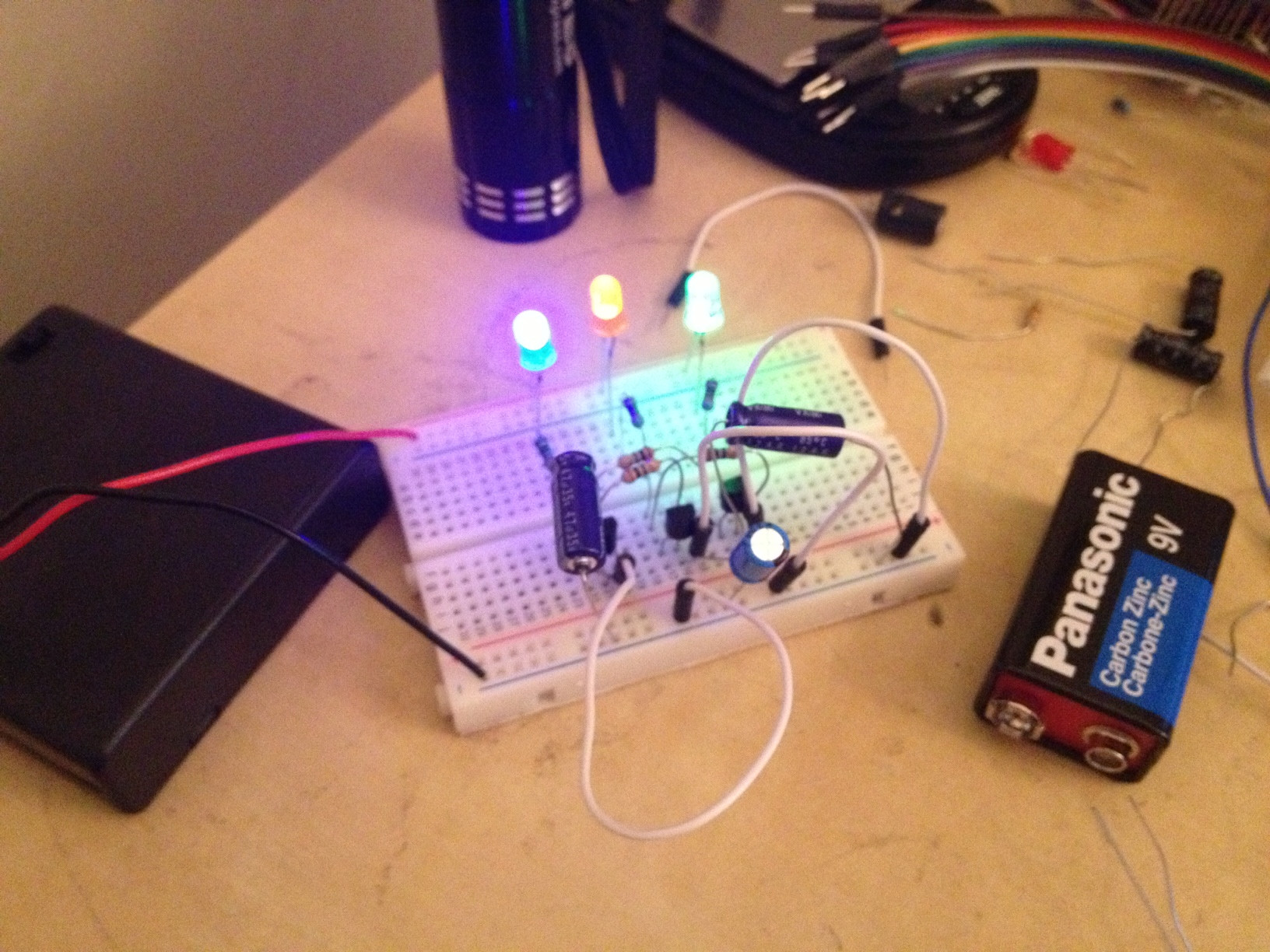 Page 31 in this document shows a similar circuit.

In my experience the circuit refuses to run on 6V, but 9-12V worked fine.

Here's the circuit that inspired you: - 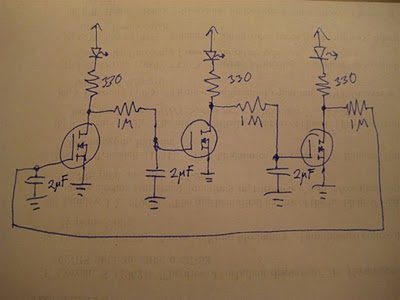 This circuit works because it uses mosfets.

Replacing the mosfet with a BJT isn't going to work. For a start, using 1Mohm for the base resistor of a BJT means the maximum current into the base (from 6V) is 6 micro-amps. The current-gain of each BJT might be 200 and this means about 1mA drive to the LEDs and hardly enough to make them bright.

But, worst of all, due to only 1mA in the collector, the collector voltage will be at about 4V and not likely to be lower. This means the actual base current is only about 4uA and this means probably about 4.5V (ish) on the collectors and somewhat less than 1mA thru each LED.

All the collectors will be like this - and in turn, they are partially turning on the BJT that is following - all the LEDs will be dimly lit and no ring oscillation I'm afraid.

The mosfets work because their gates are, to a slow speed signal, an open circuit and the caps on the gates can fully charge without being limited by the forward conduction of a BJT base-emitter junction. And, because there are a ring of three devices, the mosfet will continue to turn fully-on properly illuminating its LED and properly discharging the subsequent RC network attached to it's drain thus turning off the mosfet after it.

Here is a better circuit that you can try. Connect the ground leads to the negative terminal of a DC power supply and the VCC lead to the positive terminal. When the DC Voltage(potential difference) between the ground and the VCC is >= +10V it starts up and oscillates continuously until the power supply is interrupted. One design note: The schematic was constructed and tested using NI MULTISIM 14 but for the physical circuit I used NTE101 Germanium NPN transistors instead of the 2N3904 silicon NPN transistors. Try connecting the LEDs in parallel to the Oscillator output lead on the right of the schematic. 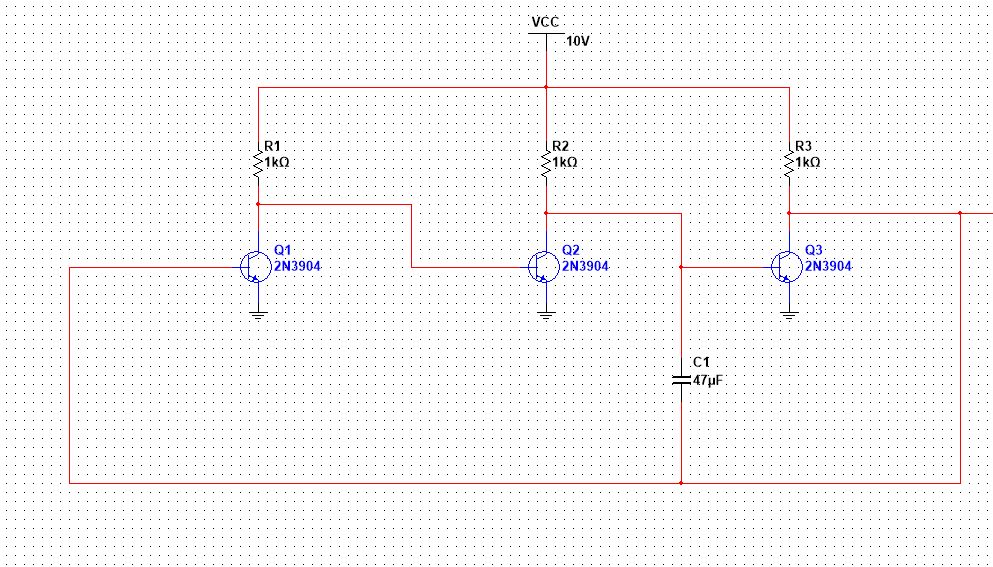 The 1Meg resistors are so high that the current gain of a typical BJT won't give a net gain around the loop of over unity, so no oscillation. MOSFETs don't have a problem with this high resistance.

To make this circuit work you could increase the power supply to 12 volts and increase the 220 ohm resistors to 1kilohm and it will probably work, or decrease the 1 Meg resistors to around 33k and increase the capacitors by a factor of 30 to keep the same frequency (expensive!) ... probably best to use 2N7000 MOSFETs and the original circuit, although there is still a possibility with this type of circuit that it won't start oscillation every time it is turned on (you need, as another answer.said, a start condition with some imbalance, otherwise all transistors can go into saturation before is oscillations build up).

Not the answer you're looking for? Browse other questions tagged led transistors oscillator or ask your own question.