Formation of Ions in diode

I have some basic diode questions. When we forward bias a diode the electrons in the N region cross over the depletion region and enter the P region. Here they are supposed to recombine with the holes which are abundant in the P region. However my issue is this. When electron and holes recombine dont they form an ion? And ions are not mobile. So what mistake am I making here?

This answer will describe what happens on the P side of PN junction. The same concepts are readily applied to the N side with appropriate changes in signs of mobile and static charge.

While diffusing through the quasi neutral P side, excess electrons have a chance to "meet" a hole and perform a recombination. The hole is just a vacant electron state some atom or ion - yes, the recombination can either ionize the acceptor atom, or neutralize an ionized silicon atom. We say "electron recombines with hole", but in reality it is just that the electron is trapped in the vacant place in the lattice.

You forget about charge conservation: if the electrons which are being injected into P region were recombining with the holes that initially present there, there would be a net increase in the negative charge on the P side. This mechanism can't sustain a steady state current which is flowing through the diode.

The current densities are: 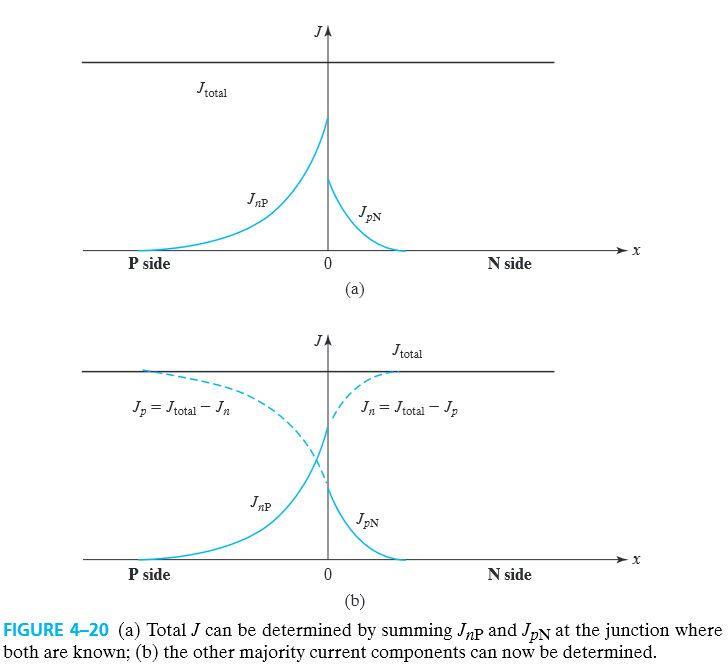 On the above graphs you can see that the sum of electrons current and holes current is constant throughout the diode. This means that holes which are lost in recombination are compensated by the current from the P side metal contact - the net charge density remains the same in quasi-neutral P region (neutral), and the amount of free charge carriers remains the same.

[During this transference when] the ... electrons come [in] contact with [the] holes, [they] are eliminated by recombination. [Similarly in the case] of [the] N side. The net result is the diffused electron and holes are gone, leaving the charged ions adjacent to the interface in a region ... called the "Depletion Layer".

Rest of the ions are responsible for the electric field