Is there a simple way to add a tiny offset so that the comparator switches at (say) \$ V_+ > V_- + offset \$? That would allow me to guarantee the comparator output when the inputs are equal. I don't want hysteresis here but just an offset to the point where the transition happens.

Alternatively, is there some other way to solve this problem? Basically, I want to detect the difference between even a small current flowing and no current flowing.

Edit: Especially to those who suggested the wheatstone bridge, what if the photoresistor varies from 50k\$\Omega\$ to 50M\$\Omega\$? At the higher end of that range, the two inputs to the comparator become very close to being equal again... If I use a gigantic (i.e ~50M) resistor (R3 in @markt's diagram) in the static arm of the bridge to compensate for the larger load range, then V- is going to be very, very close to rail; when the load is disconnected, the two comparator inputs are again very close to being equal to each other.

A good cookbook for op-amp designs (Application Note 31 - Op Amp Circuit Collection) can be found here from the former National Semiconductors (now part of Texas Instruments). On the lower part of page 26, you can find a current monitor circuit. It uses a small value sense resistor in series with the load, like your idea, to measure the current flowing through the voltage being dropped across the sense resistor. 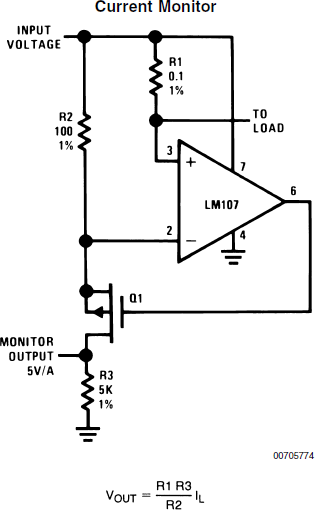 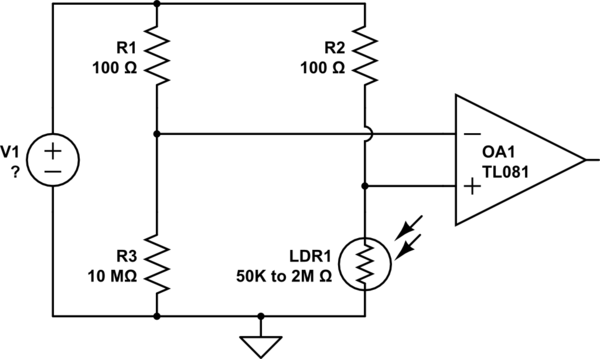 You probably need to use what is called a bridge circuit. This uses two limbs of resistors.

Here's a picture I just found that is similar to what you probably need: - 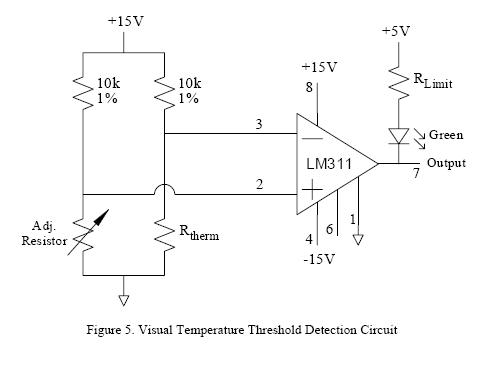 The comparator inputs connect to the mid points of the 2 limbs. It's called a wheatstone bridge if you want to look it up. Here is a link where I took the picture from.

This needn't run from +/-15V supplies providing you choose the right comparator or op-amp BUT watch out for leakage currents into the op-amp/comparator inputs if you are using large values of resistance.

With a 50 MΩ (presumably) dark resistance it will be very hard to differentiate between sensor present and an open circuit.

One option that might be worth considering is to mount an LED beside the sensor and pulse the LED periodically while simultaneously checking for a drop in resistance. If there is light on the sensor already the resistance will be low so it won't be necessary to blink the LED.

This solution requires at least one extra wire to drive the LED and due to the switching and checking it probably suits a micro-based project rather than a continuous analog-only circuit.

You should probably check for short-circuits too while you're at it.

Not the answer you're looking for? Browse other questions tagged sensor operational-amplifier current comparator or ask your own question.

1
Understanding electrical characteristics of comparators: input offset voltage and open collector output
2
MOSFET Leakage current
4
How to detect end of Capacitor Pre-charge
0
Op-Amp inputs are sinking too much current in comparator mode
0
Unexpected results when trying to amplify voltage across a wheatstone bridge
1
Comparator as a current detector
0
Amplified input gets offset?