Why do they tell that

• Burst length should be 10 cycles/burst or longer. After each burst which is between 10 cycles and 70 cycles a gap time of at least 14 cycles is necessary

And what is the "carrier frequency" (30kHz)? I think infrared light frequency is measured in terahertz? Are those 7 pulses in the 600us bursts in the diagram are periods when LED emits light with gaps imbetween? How actually I supposed to communicate over the carrier frequency? 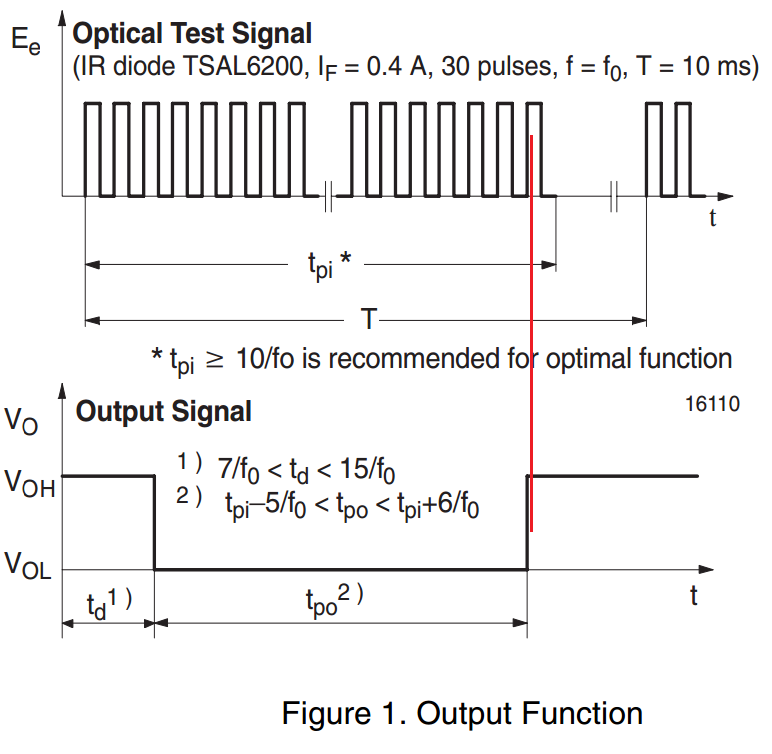 My computation is that if every pulse takes 1/30k sec then 30 pulses take T = 1 ms. Furthermore, I see on this diagram that reception terminates (V_O goes high) even though transmitter is still bubbling. Can it predict the future?

update Also, the upper part of the second diagram (Figure 1) says that 10 led pulses is optimal for reception but bottom clarifies that receiver recognizes the burst that is between 7 and 15 LED pulses. That is, it is guaraneteed to receive bursts only when they are 15 LED pulses or longer. How can I use the optimal 10-pulse bursts then?

That diagram is not to be taken literally: the burst are draw as 7 pulses, but 600 us of 30 a kHz signal is 18 pulses. The intent of the diagram is to specify the minimum pause length.

And what is the "carrier frequency" (30kHz)?

The frequency at which you must blink the IR LED

Are those 7 pulses in the 600us bursts in the diagram are periods when LED emits light with gaps in between?

How actually I supposed to communicate over the carrier frequency?

they don't, but I have no clue what they are trying to say.

The top and bottom parts of the figure have individual time axises, hence you can't draw a vertical time line (actually you can, but it has no meaning)

No, they say that >=10 pulses is recommended.

The explanation at the lower part is even more cryptical, I think it says that (for the test signal as specified in the upper part) the output will turn active (=low) at between 7 to 15 pulses after the start, and its length will be between burst length minus 5 and burst length plus six pulses.

Note that in general you can not use the common UART-like encoding with these IR receivers. They are optimized for encodings that have 'enough' pauses. Examples are Machester (used in the RC5 protocol) or pause-duration encoding (NEC protocol).

Is there to help the receiver acknowledge there is a signal and synchronize to it so the data is properly framed. In other words give it enough time to set itself up properly. There could be other IR senders with different carriers so it needs to be able to discriminate. Hence the specification to ensure the detector works correctly and doesn't respond to a false signal.

I think you missed a very important part of the drawing - the two vertical ticks on the X axis - this means a BREAK in the time line. 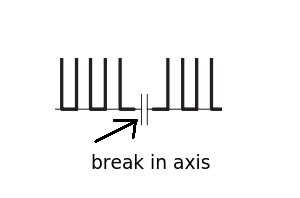 The diagram was focused on the important part - the data and gives representative timings rather than the full signal which would have made the diagram very wide and less clear.

The data stream - the bits that carry the information - modulate these 'carrier' pulses of infra red by switching them ON and OFF at a much lower frequency.

The emission frequency of the LED has nothing to do with it EXCEPT it is chosen to be infra-red to try and avoid interference in the sensor with other light sources.

Not the answer you're looking for? Browse other questions tagged infrared datasheet diagram terminology ir-receiver or ask your own question.