Turn off power strip when another circuit is turned off

I have a switch in my wall which turns a outlet on and off, however I'm nearing maximum capacity on that circuit. I want to be able to plug more stuff into it so that I can turn it off with this same swich.

My idea is to somehow build a little box which plugs into 2 separate circuits, the one controlled by the switch, and another circuit which is on all the time. The box would also have a plug that I could plug a power strip into.

When the power to the circuit controlled by the switch is turned on, the box activates a relay which turns power on to the output which goes to the power strip, coming from that secondary circuit. 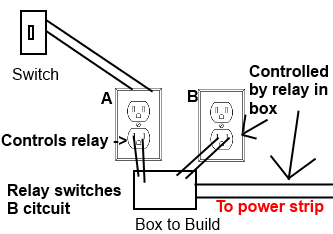 Does this make sense? In this way I can control more devices with my switch.

How could I build this? I know it'd use a relay, but what else? Safety concerns?

Sure, this makes perfect sense. A DAYTON 5X847 relay would do the job. Its coil rating is 10VA at 120VAC, so you don't need to supply DC to the coil. When it receives 120VAC, it switches its DPDT contacts.

You would wire up the DPDT contacts to the live and neutral of your secondary circuit, routing them either nowhere (off) or to the power strip.

The relay is rated at >20 amperes so it will handle a full residential circuit.

Not the answer you're looking for? Browse other questions tagged switches ac mains or ask your own question.

6
First mains-powered project - best practices?
3
Micro-controller - Detect If AC Device Plugged In / Drawing Current from a Relay
0
Designing a switch box for lights
0
switch and relays
1
Switch or gate that activates when not grounded
3
How is this board switching a 24V DC relay via AC Mains voltage?
4
Why does the power strip's switch light turn on even when the switch is off when I plug in a Schuko plug (CEE 7/7)?
0
IGBT won't turn off