Why are the pinouts of LPC21xx all over the place?

I am working as a winter intern at a robotics company. My job is to assist the lead embedded developer in... whatever he wants my assistance in.

About a week back, I was handed a NXP blueboard with LPC2148 on it. Although I loved the more processing power (compared to the ATmega32s I had been working on), I found something very odd about the ARM7 based controller. If you look at the pinout here 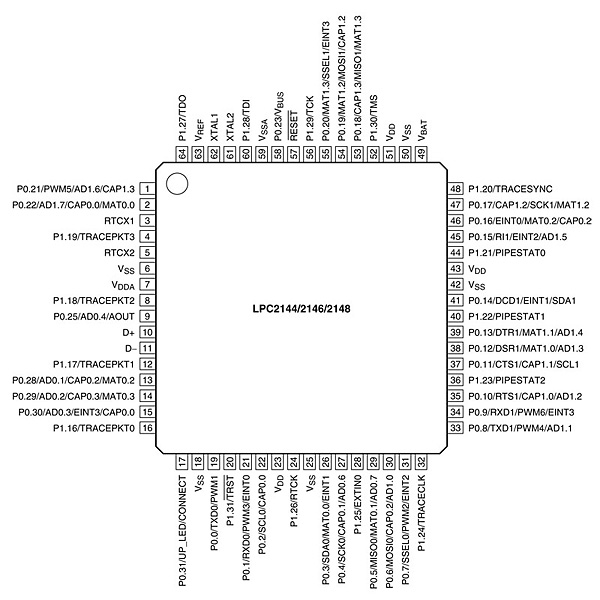 you would notice that the port pins are just all over the place. In the AVR series everything is arranged cleanly with all the port pins together. Why is it not so in the LPC21xx? I cannot find any logic at all, they are not arranged by pin number or by functionality (like all the JTAG pins together). It seems like the designers just stacked the pins in a random form.

Can any body please explain the reason behind this?

It will certainly be a consequence of how the chip is laid out internally, combined with the fact that it is fairly rare on microcontroller applications to need blocks of consecutive IO pins to make wide buses etc., so grouping together isn't a high priority and not worth spending additional silicon area on. Of course this logic breaks down somewhat on parts with external bus interfaces, making layout, particularly with QFPs something of a nightmare, but volume users will probably be using BGAs anyway to save space - I've always thought 208QFPs look a bit ridiculous..!

There are lots of reasons why the pinouts are the way they are.

The easiest to tackle first is the power/ground pins. Advanced chips will arrange their power/ground pins to minimize inductance and to reduce the "loop area" of signals plus the signal return path. This will improve signal quality and reduce EMI/RFI. The absolute worst thing you can do for power/grounds is what was done on the original 74xxx series parts with power on one corner and ground on the other. Xilinx has a white paper on their "sparse chevron" arrangement that is interesting. If you search on their web site they have lots of other papers and presentations talking about it with actual measured results and stuff. Other companies have done similar things without all the hype and documentation.

For MCU's where most of the pins are user configurable there really isn't a good or bad way to do the pinouts (excluding power/grounds). It's almost guaranteed that whatever they do, it'll be wrong. It is very much like us buying a dress for the wife-- no matter what, it'll be the wrong size, style, color, fit, etc. You can either compensate in software by using different GPIO pins, or by creative PCB routing, or by uncreative PCB routing (a.k.a. just adding more layers).

Another possibility is that the pinouts have been optimized for routing the PCB on minimal layers, but you're not seeing that. CPU's, for example, that require connecting to a specific chipset (or RAM) often have their pinouts designed to make that interfacing/routing easier. This is common on things like Intel CPU's w/Intel chipsets. That's about the only way you can get two 800+ ball BGA's to connect together on a 4 or 6 layer PCB filled with other power/ground planes. In these cases there are often app notes that explain how to do the routing.

And the third possibility is that it's as simple as "that's just the way it ended up". It's similar to the "whatever we do, it'll be wrong" approach, so they just do whatever was easiest or cheapest. No real magic here or mystery here. In the past there have been chips that were popular but people would complain about the pinouts-- so years later another version of the part would come out that is functionally the same but with the pins moved to facilitate PCB routing.

No matter what, in the end "it is what it is" and we just deal with it. It honestly doesn't cause too many problems, and we're so used to it that it doesn't bother us (much).

IC pinouts are really determined by the layout of the circuit on the chip inside the package.

There are various considerations for IC layout designers, but it would be unlikely that external pin assignments would differ much from the die pad arrangement.

One of the considerations would be power distribution around the chip, meaning that VDD (or VCC) and ground may appear in unexpected places.

There's always a good reason for it. Believe me, IC designers don't do things arbitrarily.

If you look carefully you can see they are in order, but not grouped together. It probably comes down to how easy the chip is to manufacture. 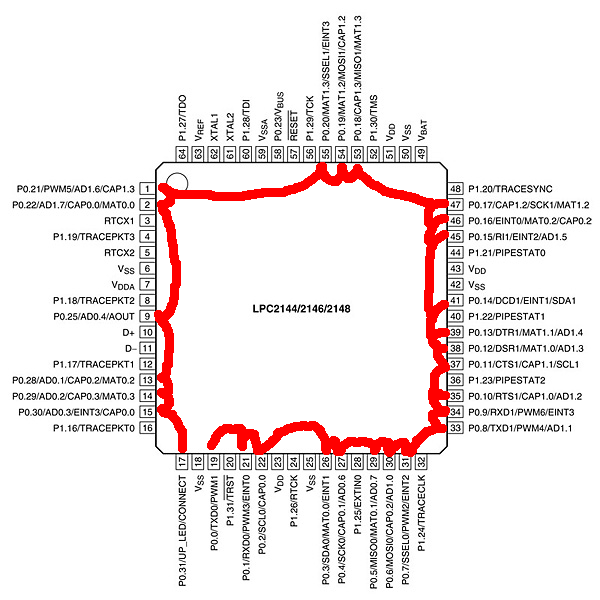 It has to do with the places where a given signal comes close enough to the edge of the die to make a bonding pad for it there. That determines the order the pins will have. Sometimes a few signals could be switched, but having them all in a logical order may increase the die's size, which means extra cost.

IC's can have redistribution layer, which would allow to map any pin to any location, but this would just increase bare die cost by some 5-10%.

Each manufacturer choose one of the ways:

3) Have 1 extra layer (a bit more expensive to manufacture)

The reason is that arranging the pins in a logical order is way down on the priority list of a chip company. Most designers they care about (which generally does not include hobby robotic people) will use a CAD package that has the pinout in some library, so they don't care either. So other factors, like efficient layout of the chip die, are more important.

Note that for some pins chip manufacturers do care:

I remember 30 or so years ago I tried to make a single-sided Z80 computer PCB. I got most lines routed, but those silly data bus pins made it impossible.

Not the answer you're looking for? Browse other questions tagged pinout or ask your own question.

6
Why are IC pinouts often so illogical?
6
How to explain this difference in pinout?

11
Why JTAG connectors are available in 10pins/14pins/20pins when JTAG is of 5pins
0
I am messing around with some power supplies. There are pinouts labelled "reserved" and "remote"- what are they?
0
What are these unpopulated holes on the Arduino Leonardo?
1
What are the address input pins used for in ds1621?
7
Why transistor pin outs are not standardized?
0
Why are the collector and emitter on this TO-92 transistor reversed?
1
what are the other 2 pins for in this old dc motor (Sankyo BFB9L11)?
3
Why are "ice cube" PCB mount power relays pinned out so that the COM pin is between the coil pins?