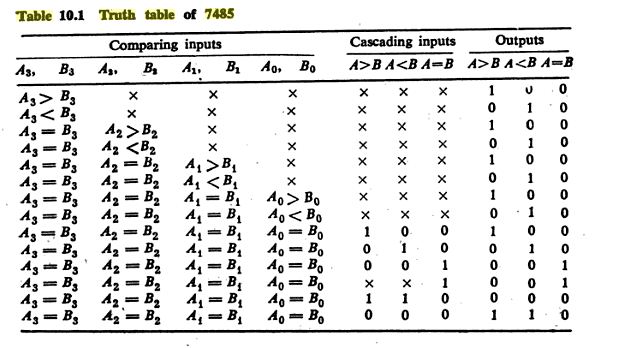 The cascading inputs come from the outputs of another 7485. If you wish to create a 16 bit magnitude comparator, the other 7485 connects to the least significant byte (LSB).

Similarly, the penultimate line suggests that the 'A' LSB inputs are simultaneously greater and less than the 'B' LSB inputs which is also contradictory, so the last two lines indicate an error condition.

The last two rows of the truth table are degenerate in that there should be no way to generate them with proper input. They are there for completeness, in order to show that all possible inputs have been accounted for.

Not the answer you're looking for? Browse other questions tagged integrated-circuit digital-comparator or ask your own question.

4
Simple vending machine circuit
2
Shift registers, understanding parallel-in serial-out
4
Help understanding practical transistor considerations?
0
Existence (or reason of lack) of simple cmos LIFO registers IC
0
How to design a combinational circuit that finds the minimum among multiple given numbers?
0
Curious Behavior In Logisim while trying to mimic a halt instruction
3
I am designing a 7 segment display but I am finding it a little bit hard to associate them
2
Circuit to detect two sequential pulses
1
What does "preserving the logic expression" mean?