How do transposition towers in transmission lines work?

There're such things as transposition towers in power distribution powerlines. The idea is that for example you have three conductors running in parallel at the same height and the leftmost of them is phase A and after transposition the middle one is phase A and the leftmost one in now phase C and phase B which originally was the middle conductor is now the rightmost one. Wikipedia says it's needed because

Edit: Buried in the comments of one answer is a link to a picture highlighting the arrangement of the phases on the transposition tower in the wikipedia article linked above. The picture deserves being shown here... 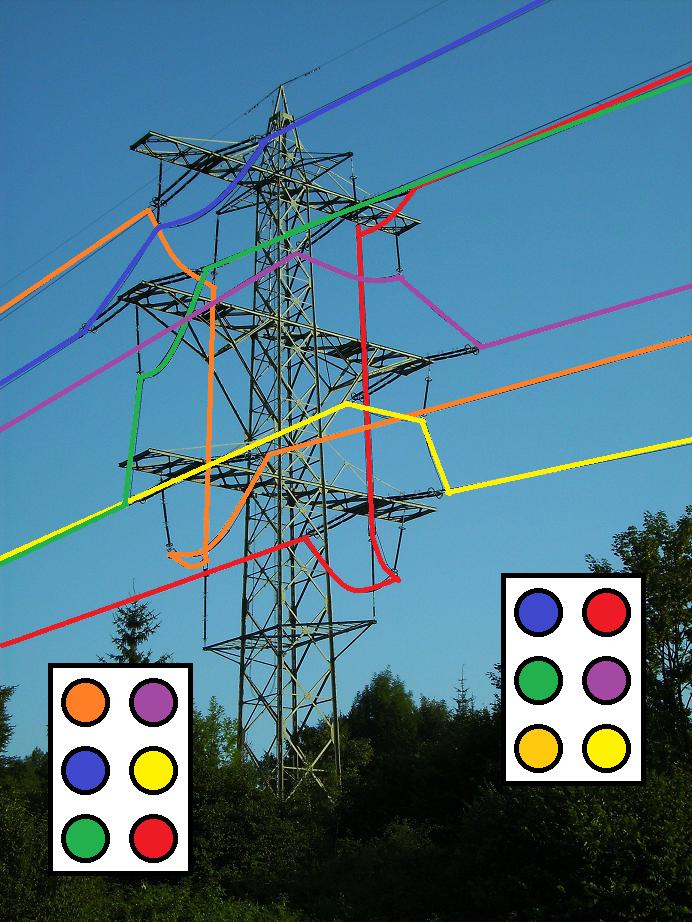 The picture shows three common arrangements of wires. I added wire-to-wire capacitor symbols, note that you also have a wire-to-ground capacitance for each wire. Capacitor values decrease as the distance between the wires increases.

Overall, you want to have an approximately equal capacitance from each wire to the two other wires. Thus, by transposition of the wires, you create, in average, an equal distance (and capacitance) between all wires with respect to each other.

Over the entire length of the system, the distances and capacitance values of the three wires with respect to each other are equal, but the wire-to-ground capacitance is bigger for the wire(s) closer to ground.

By having the three wires swapped over using transposition, each wire spends an equal averaged distance to ground. Thus, the wire-to-ground capacitance values match for the three-phase system.

Case 3, Wires neither spaced equally with respect to each other nor to ground

Now, you end up with two reasons for transposition along the total run of your line.

This is the same concept as behind twisted pair wires. Two wires running parallel will couple differently to the environment because they are on different sides. By twisting them, you average out the external coupling to be about the same from each wire to the environment.

It's a little more complicated when you have 3 wires because you also want to balance coupling between the wires too. By twisting the three wires periodically, each of the wires is treated equally with respect to coupling to ground, the other wires, and anything else around. Radiation into space is also a issue with large power lines. Again, you want all effects to be equal between the three conductors.

Power lines don't appear twisted at first glance because the pitch of the twisting is miles. You want the twist pitch to be a small fraction of a wavelength and there to be anough twists in a line so things even out well. At 60 Hz, a few miles is still a "short" distance.

Unsymmetrical conductor spacing results in different inductances for each phase which causes an unbalanced voltage drop, even when the load currents are balanced. The residual or resultant voltage or current induces unwanted voltages into neighbouring communications lines. This can be overcome by the interchange of conductor positions are regular intervals along the route, a practice known as transposition.

I have seen transmission line designs which called for uneven spacing of the conductors (i.e. at +1200mm, +375mm, and -1200mm along the cross-arm of a T-shaped wooden pole.

Suppose you have three wires in a horizontal plane: . . .

The middle wire is adjacent to two other wires. Thus, it will be affected differently than the wires on the end. So you want each wire to be in the middle for some distance, so that the effects balance out.

It's also common to have three wires vertically:

Not the answer you're looking for? Browse other questions tagged high-voltage capacitance transmission-line power-engineering or ask your own question.

15
Why are there only 3 wires on this power line?
-2
Three Phase to single phase