Why does reflection off a PCB via look like this?

My question is related to http://mobius-semiconductor.com/whitepapers/ISSCC_2003_SerialBackplaneTXVRs.pdf.

On the page 18 there are a few figures of "TDR off Diferent Types off Vias". I am confused regarding the capacative, inductive and L-C-L titles under the different vias. What is the explaination for why graphs look the way they do? What is the meaning of the titles gives under the graphs? I am not sure why one is capacative and another is inductive and another is L-C-L. I am also not sure as to what blind via and counter boring means.

I do know somewhat about transmission lines and matching impedance, but I have never encountered these type of graphs and reflections at vias before.

signal-integrity transmission-line via
Share
Improve this question
asked Sep 23 '13 at 14:59

Try not to fixate too much on the fact that these are vias in a PCB. The point is that they represent impedance changes in the signal's path. These effects are not unique to vias, they can be caused by many different signal path geometries. The titles under the graphs (on page 18, slide 36 of your linked PDF) tell which impedance change is most dominant for the particular geometry shown. 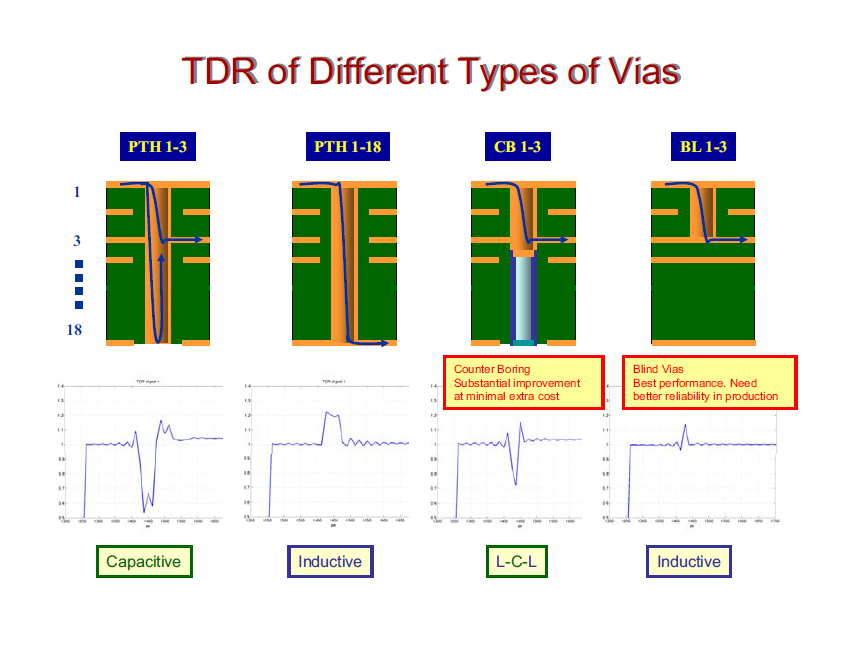 For those who hate to download a 2.5Mb PDF for a single slide.
(Image source: ISSCC_2003_SerialBackplaneTXVRs.pdf by Mobius Semiconductor)

There are a couple types of vias shown here. The first two demonstrate the most common type, the plated through hole (PTH), this is where the via goes all the way through the board and it's only connected at specific layers of the PCB (in this case either layers 1 and 3 or layers 1 and 18). The third via shown, counterboring (CB), is just the first via type, but with the extra metal removed (or not added). The fourth via shown, the blind via (BL), is like the CB, but both hole and conductor do not go all the way through the board. There is also another type not shown here, the buried via (BV), which starts at an inner layer and stops at another inner layer. It would have effects similar the the PTH 1-18, but not exactly the same because the signal doesn't have its surrounding dielectric change (it's inside the PCB the whole time).

These various geometries lead to different discontinuities in the signal path.

The graphs look the same as if you were to place any of the described components in the signal's path in series or as a shunt for inductor and capacitor respectively. Observe the graphs below:

Further, you can create these effects on a PCB without vias. For instance, the image below shows different stripline features used to create filter elements etched into a PCB, 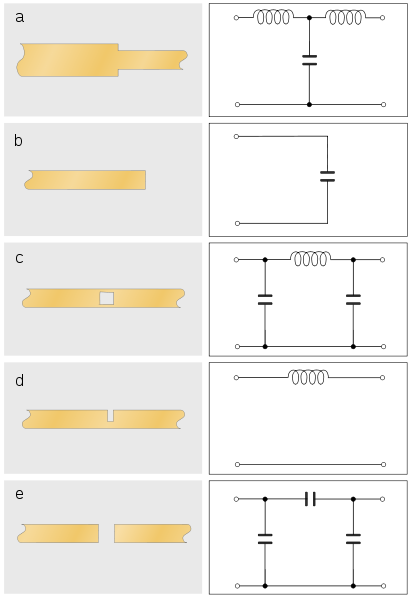 You can probably see how these might relate to the via geometries and the effects that arise from them.

The reason all of this occurs gets deeper into transmission lines, impedance matching, and electrical fundamentals. Which is a whole other thing. There are many resources available to refresh t-line knowledge, including some very nice animations.

Not the answer you're looking for? Browse other questions tagged signal-integrity transmission-line via or ask your own question.

29
Transmission line reflection. I would like a non-mathematical explanation
1
PCB via, increase annular ring or increase hole size?
12
Why does reflection only applies to transmission lines?
1
PCB via Planning
0
What could probably go wrong in PCB if output PAM4 signal my look like this?
10
Ethernet RMII on two layer PCB
1
High Speed Signal on Large Circular Ring
0
Why is the pulse reflection becoming like this in pulse?
1
Standing waves feedline length and dipole antenna feedline
3
Using open termination to intentionally reflect RF signal