I just started sketching ideas to add LFO to VCA modulation in a device that already has a VCA circuit employed, but I’ve run into a snag… I can design a circuit to give proper modulation at full open VCA voltage, but as the signal voltage drops from 4.5v to 0v, the moduation signal falls and begins clipping the lower portion of the wave.

The first picture below is the stock circuit. 4.5V Key Down/0V key up (can be attack/release contoured) to 15k resistor feeding a 3906 transistor with base to ground. Collector to 10k resistor then to the input bias of a 3080 transconductance op amp. Voltage on the other side of the transistor before the 10k is -15V Key Up and -12V Key Down.

Second picture is one my rough sketches. The LFO (1.6 to -1.6 swing) with a bias from the A/R voltage (which is fed through a buffer) feeds an amplifier that connects to the base of the transistor that was originally grounded. With this circuit I get a good modulation swing from ~-15V to ~-12V on the other side of the transistor at max A/R voltage, but as the 4.5 falls back to 0 the bottom begins to clip, as in picture three. I would like the amplitude to decrease steadily as the 4.5 falls to zero and then stop sending signal to base of transistor.

I tried using biased transistors as variable resistors in the gain loop of the LFO amplifier but my knowledge of transistor switching and operation are not that great. If anybody out there could help it would be greatly appreciated.

The crux of your problem seems to be that you want to multiply the LFO signal with the A/R signal, and to do this multiplication requires circuitry that is effectively a second VCA.

One way of making a VCA is by making use of pulse-width modulation technique as Andy aka suggests. The classical 'analog synth' method of doing so is by altering the bias current on a transistor differential pair -- usually within a transconductance op-amp. See pages 8-10 or thereabouts of the LM13700 OTA datasheet.

The above talk of multiplication and signal VCAs assumes that the input to your existing VCA is linear (which I believe is the usual case). If the input is in fact logarithmic, you simply need to sum the A/R signal and LFO signal (e.g. using an op-amp mixer) before sending it to the VCA.

Your circuit appears to be only controlling the DC level of the signal via the 4k resistor and the 1k resistor attached to the triangle wave input. That's how I see it going into the op-amp with the gain of 9. Is there some circuit you are basing this on? 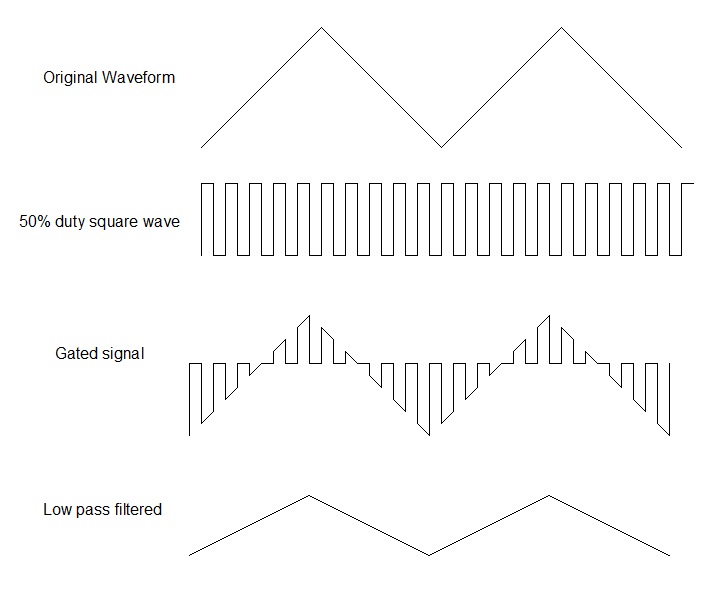 Not the answer you're looking for? Browse other questions tagged voltage transistors amplifier modulation or ask your own question.