NPN transistor circuit connection, what determines which region it is at?

I can't understand the case where it is in a circuit as in this sketch: (had to remove the link due to lack of reputation but it's just the basic BJT circuit) 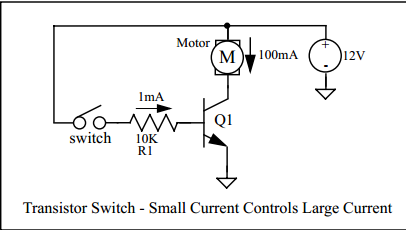 They're using it as it will always be in saturation mode although I see the base emitter is forward biased while the base collector is reverse biased so that suggests an active mode not saturation one.

In general, it is the states of the PN junctions inside the transistor which will determine what operation region it is in. However, after gathering some experience, one can deduce the states of the above junctions by inspecting the circuit itself without actually measuring the voltages at the terminals. 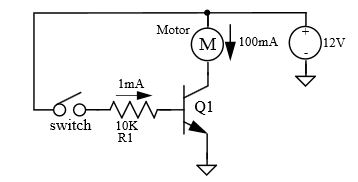 Once the switch is closed a current of approximately \$1mA\$ will flow into the base, which will cause:

Since this is higher than the minimum of \$0.6V-0.7V\$ for being out of cut-off - the transistor is in one of its operational modes. In reality, the Base-to-Emitter voltage will not rise much beyond \$0.6V-0.7V\$ (due to presence of protection resistor R1), which means that the Base current will be a bit higher than \$1mA\$.

Knowing that the motor is \$12V, 100mA\$, and that the transistor is capable of handling \$100mA\$ Collector-to-Emitter current, we can deduce that:

But this means that Collector-to-Base junction is forward biased which implies that the transistor in saturation.

The above analysis is quite general for this configuration (full voltage rated motor switched by matching BJT), therefore, in majority of circuits like this one, the transistor will be in saturation.

Experienced engineers perform the analysis above at a glance, knowing that the transistor in saturation a second after they see the schematics.

Not the answer you're looking for? Browse other questions tagged bjt npn or ask your own question.