ASIC timing constraints via SDC: How to correctly specify a multiplexed clock?

Having found multiple, sometimes conflicting or incomplete information on the internet and in some training classes about how to create timing constraints in SDC format correctly, I'd like to ask the EE community for help with some general clock generating structures I have encountered.

I know that there are differences on how one would implement a certain functionality on an ASIC or FPGA (I have worked with both), but I think there should be a general, correct way to constrain the timing of a given structure, independent of the underlying technology - please let me know if I'm wrong on that.

There are also some differences between different tools for implementation and timing analysis of different vendors (despite Synopsys offering a SDC parser source code), but I hope that they are mainly a syntax issue which can be looked up in the documentation.

This is about the following clock multiplexer structure, which is part of the clkgen module which is again part of a larger design: 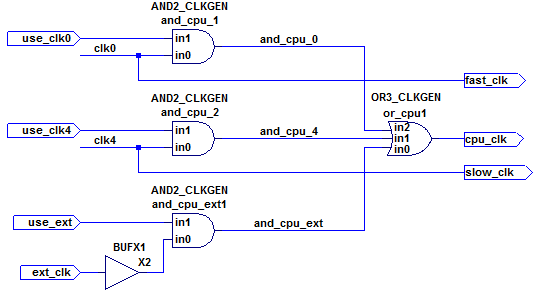 While the ext_clk input is assumed to be generated externally to the design (entering through an input pin), the clk0 and clk4 signals are also generated and used by the clkgen module (see my related ripple clock question for details) and have associated clock constraints named baseclk and div4clk, respectively.

While the simplest case of an on-chip clock multiplexer seems to require just the set_clock_groups SDC statement:

...in the given structure, this is complicated by the fact that clk0 (via the fast_clk output) and clk4 (via slow_clk) are still used in the design, even if cpu_clk is configured to be ext_clk when only use_ext is asserted.

As described here, the set_clock_groups command as above would cause the following:

...which would be incorrect, since the other clocks are still used elsewhere.

The use_clk0, use_clk4 and use_ext inputs are generated in such a way that only one of them is high at any given time. While this could be used to stop all clocks if all use_* inputs are low, the focus of this question is on the clock multiplexing property of this structure.

The X2 instance (a simple buffer) in the schematic is just a place-holder to highlight the issue of automatic place&route tools being usually free to place buffers anywhere (such as between the and_cpu_1/z and or_cpu1/in2 pins). Ideally, the timing constraints should be unaffected by that.

Define divide by 1 clocks on the and_* nets and declare them to be physically exclusive. Cadence RTL compiler handles the situation correctly by generating 3 timing paths for registers clocked by cpu_clk (one path each for one clock). Registers directly driven by clk0, clk4 and clk_ext have their own timing arcs.

Not the answer you're looking for? Browse other questions tagged clock timing constraints sdc or ask your own question.

6
ASIC timing constraints via SDC: How to correctly specify a ripple-divided clock?