I have an old treadmill motor:

I need a speed controlled drive circuit for it. I didn't want to spend $60-$100 on what seemed like a pretty trivial task. Create a PWM signal, run it through a MOSFET driver, drive my higher voltage with this MOSFET and thus PWM ~90vdc to my motor and control it's speed via a POT.

Well in theory it all worked. I polled a POT from my Netduino, giving me control of a PWM output signal. I fed this signal to a MOSFET Driver IC (tc4452), which would in turn drive my MOSFET(s). The MOSFET(s) would thus be switching the higher voltage. 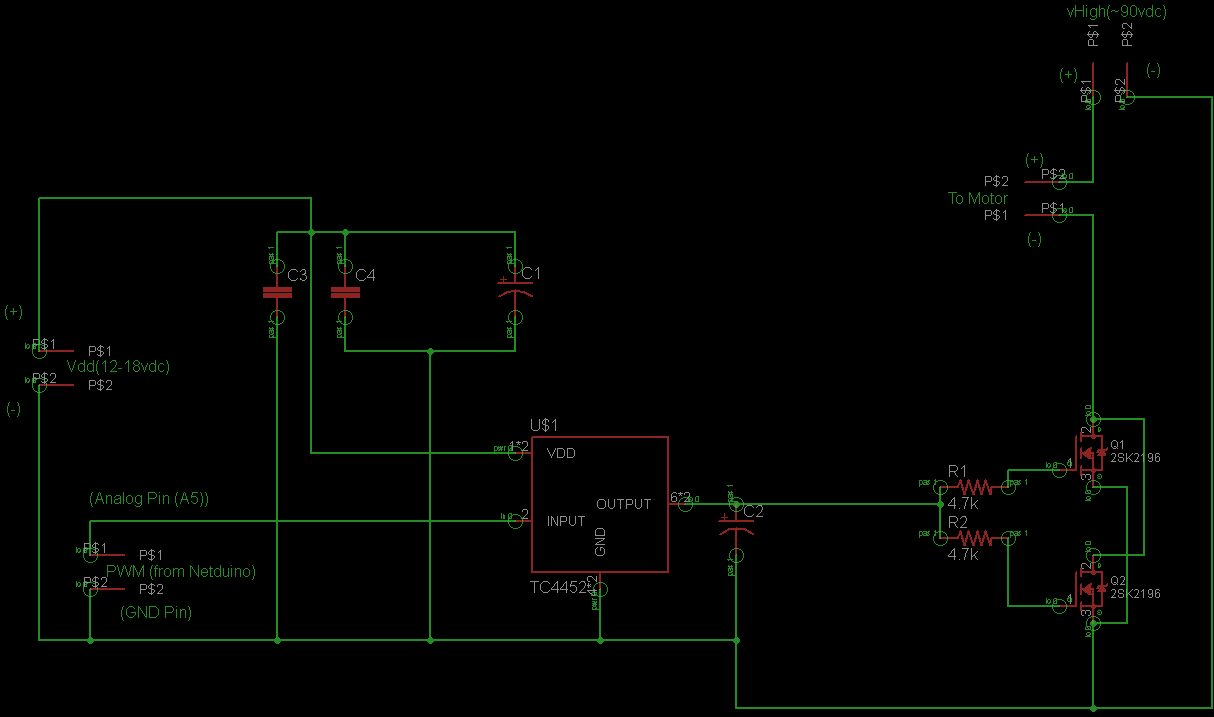 Tested it out with a lamp(no scope at home) so I could see if I was on the right track, and it dimmed and brightened (thus modulated the 90vdc) just as expected. However, it did not run my motor. I hooked it all up, everything was cool until I started moving the POT higher and the motor started reacting and then FIREWORKS! My MOSFET was toast. I tried placing 2 parallel thinking it could possibly be too much current and this might divide it, but no dice. More fireworks! :) I always wear my safety gear when toying with this kind of energy though, so no worries. Just frustrating.

So rather than wasting anymore components I would like to ask some expert opinions on the matter. Are my FETs just not beefy enough for this? or is there a possibility that the FET driver isn't actually saturating the FET properly? I would like to hear any opinions really. I just don't wish to waste money on beefier FETS if I'm just not driving the type I have with enough juice, or if I'm just overlooking something really stupid.

4700Ω on the gates of the MOSFETs is far too high. These should be no more than about 100Ω.

With such a high resistance, the MOSFETs are switching far too slowly and dissipating way too much power, especially when the motor isn't actually running yet and passing its "stall" current.

Also, what is C2 in there for? Probably should be deleted.

One more thing: Although the body diodes on the MOSFETs will protect them somewhat, it would probably be better to add a beefy freewheel diode directly across the motor.

Not the answer you're looking for? Browse other questions tagged mosfet pwm dc-motor netduino or ask your own question.