A transmission line with continuously varying impedance, how would reflection occur in this case?

Alright folks here it is, another transmission line question that has been bothering me. I understand the case where there is an abrupt change in impedance along a transmission line that leads to reflection of portion (or even all) of the signal.

Now, what is bothering me for a while is the case where we have a transmission line who's impedance varies in a predictable manner over its length. Lets suppose that we have a PCB trace who's characteristic impedance depends on it's width as per physics. Now suppose that this width is increasing linearly as the signal travels on it which leads to a continuosly linear change in it's impedance. I expect that signal would be reflected in this case too but continuously! But what I cannot imagine is how would the reflection look like in this case on the transmitting end and what the signal would look like on the receiving end. Besides this, how can one mitigate this type of impedance mismatch, I suppose that getting the correct receiver termination would be tricky in this case. hmmmmmmm...

Continuous varying impedances are used all the time for impedance matching. If you have a very capacitive part of a trace (for example, where a large component pad might be), you can have a relatively inductive transition before or after it to "balance" it out.

What will end up happening is that the reflections will "stack up" but, instead of being at one point (a VSWR peak), it will be moderately spread out. You can still imagine it discretely, but in small steps.

And also remember, if you have a small reflection point, any backward reflection after THAT will be reflected slightly FORWARD, and so on.

Anyway, the good gents at Microwaves 101 always have a nice, in depth explanation.

edit: I didn't completely answer your question. "How it would look" is dependent a bit on how you are describing it. In the frequency domain, what you'll probably get is a VSWR that is "de-Q'd". You'll go from a nice sharp peak at midband to a more gradual, broader band response.

In the time domain....well, I don't work with the time domain as much but I would imagine you would have a lower amplitude, longer pulsewidth "ringing" or reflection.

What you're asking about is called a transmission line taper.

In general, there's no analytical solution to describe the reflections. The link in Chris L's answer (if you follow through to Klopfenstein's paper) gives some examples of specific taper shapes where something close to an analytical answer has been found.

The basic way to study it is to imagine breaking up the continuous taper into several segments, each with a slightly different Z0 value. You calculate the reflections at each discontinuity and how they add up to give the overall reflection and transmission characteristics.

Then you split up the taper into finer and finer steps (with smaller and smaller discontinuities in Z0) until you have a good enough approximation to the continuous taper. You could try to calculate the results by hand but it's much easier to just get a computer program to do do it. Luckily, this kind of program is pretty easy to find --- it's called a finite element simulation program. 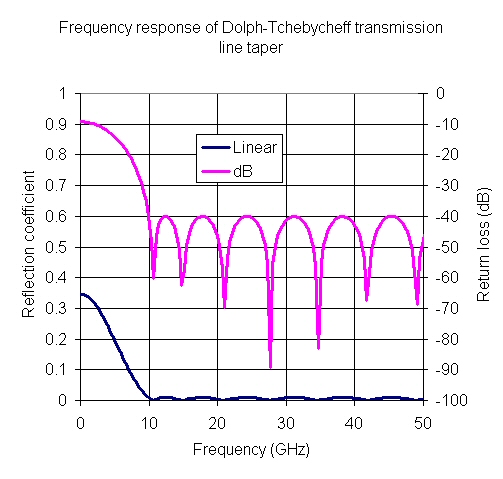 In this example, the reflection coefficient can be easily designed to be <1% at the frequency of interest.

For a common-sense explanation, it is helpful to think of anti-reflective coatings that are used in optics. In optics, reflections are caused by an abrupt "impedance mismatch" between two materials with mismatched indexes of refraction. An anti-reflective coating significantly reduces the magnitude of the reflection, and the way it works is it consists of several layers of gradually increasing index of refraction, that together form a stair-step approximation of a continuous taper.