First this is the setup: 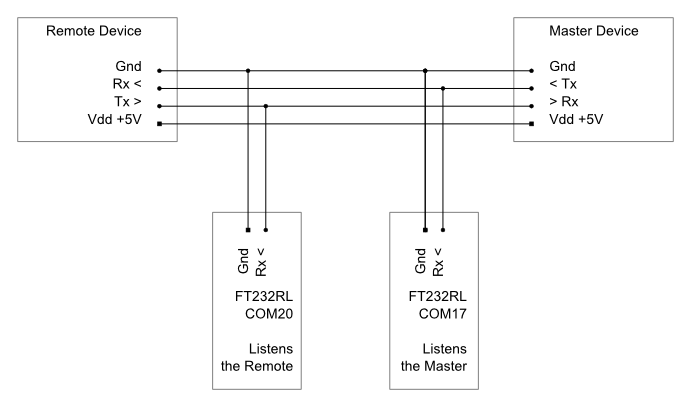 (please note that one of the grounds is not connected, both FTDIs working properly)

Now, I have used PuTTY to look at these two serial streams, both exchanging data at 9600 bauds, but my problem is logging the activity time-wise.

I've also tried some serial monitors that I found on the tubes, but the time resolution is in seconds.

Is there a tool for monitoring these two streams at the same time? If there is not, I should program one myself in Processing (it will take less time in this language I suppose).

PS: the ultimate goal of this is to replace the remote device (an actual wired remote) with a little MCU like the ATtiny85 or ATtiny2313 with a simulated input.

PS2: I only have these two FTDIs, an analog oscilloscope and a multimeter.

If you're on a 32bit Windows OS, I would recommend using PortMon. It goes down to the millisecond at least. It might even be microsecond resolution. I've used it a lot in the past with great success.

In your particular case, you will put each FTDI chip on its own serial port. Then in PortMon, simply select the ports you want to monitor from the pulldown menu. Both sets of data get logged at high resolution, and you can even add filters to reduce the amount of data. For serial protocol monitoring, I add the include filter IRP_MJ*.

I've used it before and it's great. Give it a try as well as PortMon.

Another option could be com0com or its sister project hub4com.

I wrote something like this explicitly to watch the conversation between my iPod and the iPod adapter in my car. The source is here on GitHub. It's pretty specific to the iPod protocol, but I need to be able to see the data being transmitted to and received from the iPod in real-time and match a response with its request as closely as possible. This works quite well for me.

If you want accurate timing, you can't go to separate serial ports. You need a microcontroller that can capture the data from both sources and output it to the PC at a data rate which is more than twice as fast as the data rate for the devices that are communicating. Suppose the devices communicate at 115,200 baud and the PC connection is at 500,000 baud (a rate supported by the FTDI). One could then, 12,500 times/second (every 80us), have the microcontroller output a 1-3 byte record, consisting of a header, and the lower 7 bits of transmit and receive data bytes (the latter only being included if present)

Including a timestamp in the case neither byte of data is present would avoid having to send 12,500 records/second at times when nothing was being sent.

Using an approach like this would allow far more accurate evaluation of data timing than would be possible using two separate serial ports (where timing resolution would be 1ms at best). PC software would have to be prepared to parse out the data, of course.

This may be a time when scrounging the resources to buy an inexpensive USB-based logic analyzer is the right answer. I recently acquired a USBee SX and have been very pleased. Out of the box, it can decode serial on multiple (TTL level only) lines, and keep it all synchronized to well better than single bit time.

It has no internal RAM, so it pushes all the data it samples up the USB. That has a couple of advantages, and at least one disadvantage. A big advantage is price. There's hardly anything inside the USBee SX between your signals and the USB, so it doesn't have to cost many arms and legs. The biggest advantage is capture depth. You are limited only by the storage on the PC. If you need a one hour capture to catch an elusive timing window bug, it can do that.

A disadvantage is that the top sample rate is limited so that all sample can be fed up the USB. This makes it less useful for high-end digital logic, but for serial communications protocols that really isn't a big deal.

The SX lists for about US$170. At that price it doesn't have to save your company very many hours to pay off....

It certainly isn't the only example of the breed, but it is the only one I've personally used.

Not the answer you're looking for? Browse other questions tagged microcontroller serial uart ftdi reverse-engineering or ask your own question.

4
How set the baud rate for serial communication in ATmega32u4
2
Can the Arduino Leonardo act as a keyboard, mouse, and serial port at the same time?
1
What is the maximum number of bytes that can be sent through USB-to-serial COM port at one go?
1
Monitoring serial communication and problems with my RS232 listening device
0
Same serial command, different serial replies
0
Unknown characters in the serial monitor
1
Different behaviour of FTDI231XS on two PCBs with same circuit