Why wavelength is not measured with a unit of time?

While learning Fourier transforms, I have this little doubt about wavelength.

Why is that wavelength for a sine wave, or any other wave, is measured with a unit of distance?

If it travels w.r.t. time, why is it not measured as a unit of time?

I think, in the below drawing, the green line is the wavelength. So, why measure it with a unit of distance? 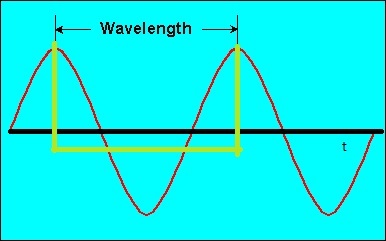 The plot you provide gives the amplitude versus time so there is no length, other than "length" of time, i.e., period) to speak of. Without further context, what you have plotted there is a simple sinusoidal function of time, not a wave.

A wave is a function of both time and space. For example: 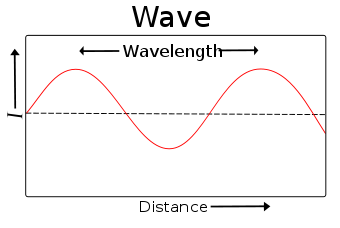 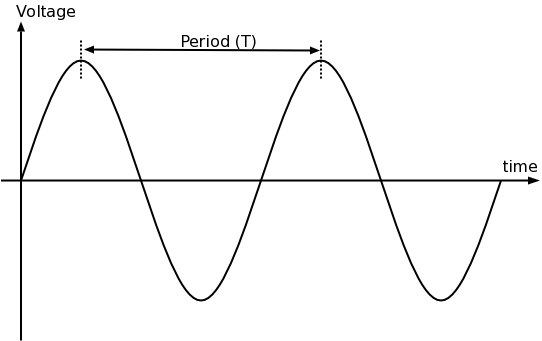 Often, this is written as:

where k, the wavenumber is:

and \$\omega\$, the angular frequency is:

The wave propagates with phase velocity

Then we can write:

The parameter labeled on your figure as "wavelength" is actually called "period" and is measured in time units (of course).

Wavelength is the distance (in space units - mm, m, km, etc.) between two periods of some wave (mechanical, electromagnetic, etc.) in the space where this wave propagates.

Note that the wavelength depends on the speed of propagation of the wave in the specific medium. If the wave propagates slowly is some medium, the wavelength will be shorter (the wave will moves on shorter distance for the given period of time)

Although the units for wavelength are units of distance, a wavelength still gives you information related to the time properties of a wave. As you likely already know, the inverse of the wavelength is the frequency, which tells you how many wavelengths a set point in space sees in a given amount of time (usually a second). A wave's frequency therefore has both time and distance units in it. If you wanted to describe the same wave with just units of time, you would use the waves period, which is effectively the wavelength just measured in different units (time ones, not distance ones).

I don't know for sure why humans divvy up waves more in terms of their wavelength vs. their period. Maybe for historical reasons, maybe the math just works out more easily that way (you'll run into a lot of that if you continue learning about signal processing) or something else. Either way, it doesn't hurt to be comfortable thinking about waves in terms of both distance and time. After all, you're probably using Fourier Transforms to go between a time continuum and a frequency continuum, which is not easy stuff for people to wrap their brains around.

EDIT: One of my coworkers just informed me that distance was the preferred measure over time because of historical technological reasons. Historically speaking, it's far easier to measure a meter than a second. I'm guessing even with today's technology we have far more significant figures on a perfect meter than a perfect second.

It's not technically wrong to describe a wave in terms of distance like it is technically wrong to use ounces to describe volume, but it does give insight into why and how to think about one thing in multiple ways, and that's what you're getting into with Fourier Transforms. Same wave, different way of looking at it, which provides different information and, when you get really good, provides different ways to isolate and pick apart information you may never have known existed. It's all pretty cool stuff, and definitely requires being able to think about the exact same thing from a totally different light.

A signal's wavelength in some medium is velocity at which the signal travels through that medium divided by its frequency. Velocity is expressed in units of distance/time; frequency is divided in units of 1/time. The time-related units cancel out, leaving wavelength as a measure of distance.

6
I2C extender or repeater?
3
What kind of component lets me measure distance in a small space?
0
Measure phase difference with less than a full wave?
0
How to measure tilt on a dynamic device?
9
1 kHz clock over long wire
1
How are system clock and oscillator frequency related?
0
HY-SRF05 max distance in 3.3v setup