What are the advantages of using a voltage divider?

If you had a circuit hooked up like this: 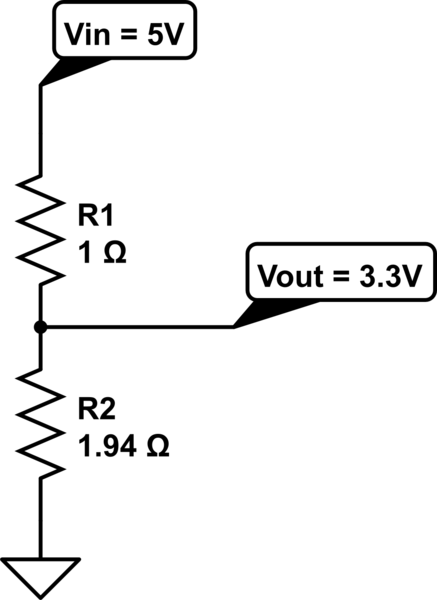 My question is: what is the advantages of using the above circuit that is just using a 120 Ohm resistor directly from Vin to limit Vout to 3.3V?

At first, you should never power a LED from a voltage source. (Voltage source is such source of electricity that have constant or near constant voltage on the load attached. Voltage sources have very low internal resistance)

You always must power the LED from a current source. (Current source is such source of electricity that have a constant or near constant current through the load attached. Current sources have very big internal resistance).

Now, the presented schematic is more "voltage source" than "current source". So, it is not good idea to use it in order to power LEDs.

Another problem is that this schematic has very low efficiency, because the most of the current will flow through the resistors, not through the LED.

On the other hand, the serially connected resistor, will turn your voltage source (battery for example) to be more current source that voltage source (high resistance) and this way will make it suitable for powering LEDs.

Another talk is why LEDs should be powered by current sources. That is because the current through the LED highly depends on the voltage. So, even very small changes of the power voltage (or of the ambient temperature), the current will be changed by high value and can become smaller than needed or big enough to burn the LED. When the LED is powered by a current source, the source is that fixes the current through the LED and this current does not changes so much.

what is the advantages of using the above circuit that is just using a 120 Ohm resistor directly from Vin to limit Vout to 3.3V?

I can't think of an advantage of using a resistor divider over a single series resistor, only a disadvantage.

Recall that, to a good approximation, the voltage across the LED is constant over a wide range of diode current. Thus, given the nominal LED voltage \$V_D \$ and the desired operating current \$I_D \$, there is a need for just one series resistor with resistance:

What happens if you add an \$R_2\$? Remember that \$V_D \$ is (approximately) constant and thus, the current through \$R_1\$ is unchanged. Thus, the effect of \$R_2\$ is to reduce the current through the LED without reducing the power required from the source.

Why would one want to do this? If you desire less diode current, simply increase the value of \$R_1\$ with the benefit of reducing the power required from the source.

In other words, adding an \$R_2\$ wastes power without benefit.

You make some mistakes here.

A LED produces a certain forward voltage over it when it conducts the right amount of current. This voltage depends on the type of LED. A typical red LED has something like 2.2V over it when conducting.

As such, your objective isn't to provide the LED a specific voltage, just enough current to allow it to operate.

The easiest way is just to place a resistor in series with the LED, and attach this series connection directly to the voltage source. For example: 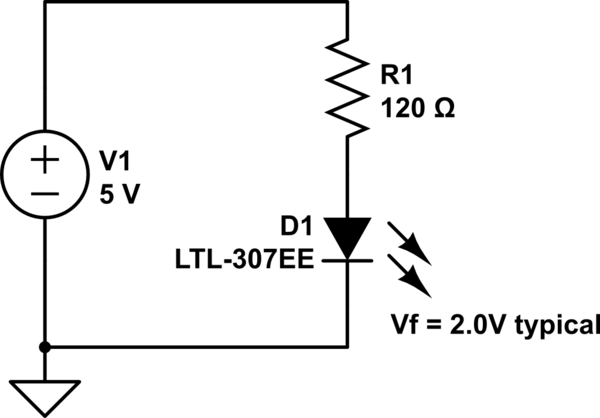 This is quite high, you probably would do fine even with a 1k resistor.

According to Thévenin, all you do here is:

Now what happens if your LED has a slightly higher or lower "internal" voltage? This is very common, even two LEDs from the same batch may differ quite a lot.

With this slight variation in LED's, you can imagine the difference in brightness.

So what happens if your LED just happens to have a slightly higher forward voltage than your proposed 3.3V voltage? It will not light up at all!

On a side note:

At the expense of roughly:

dissipated in the two resistors.

How to properly connect an LED

Check the datasheet for:

You probably want to derate the LED current to 80% or lower of the maximum value to extend lifetime of the LED considerably.

Not the answer you're looking for? Browse other questions tagged voltage-divider or ask your own question.