Resistors and the water analogy

The the most prevalent analogy for understanding electricity is the water hose one. I personally like this because it's very understandable but I have a question about how this works with resistors.

I understand that resistors will limit current which because of ohms law will affect the voltage but in a hose, decreasing the hose diameter (current) would increase the water pressure (voltage). Am I wrong on my understanding of this principle?

I'm guessing this is the phenomena you are imagining:

You hold the end of a garden hose with nothing attached, and turn on the spigot. Some water gushes out, with high volume, but low velocity. Then, you restrict the end of the hose with your thumb. The volume of the water is less, but the pressure in the hose rises, and it shoots much farther.

Here's one problem with mapping this hydraulic system to an electric system: charge is conserved, both in the universe as a whole, and practically speaking, most circuits. With your garden hose, an unlimited supply of water is magically created by the city water system, and when it exits the hose and hits the ground, it's no longer in the circuit.

To get the electric analog of this, you need a circuit capable of shooting charged particles out into space. You also need something capable of supplying charged particles. Things like this do exist (for example, a CRT flings electrons through a near vacuum at the phosphor coating on the screen) but they typically require high voltages, and you aren't going to build anything like this with just a resistor and a battery. If you connect a resistor across a battery, the electric charge is pumped around the circuit. No charge enters, and no charge leaves.

Another problem: very commonly, electric circuits are designed to maintain a constant voltage. The water supply system is also designed to maintain a (roughly) constant pressure. However, since nothing (electric or hydraulic) can supply unlimited current, all of these voltage/pressure regulation systems have limits. In the case of your garden hose, the water supply system can't supply enough water to keep the pressure at the end of the hose at the target, say 30 psi. With nothing attached to the hose, there isn't enough resistance for the supply to work against to build the pressure. It is analogous to an electric short circuit.

If you were to block the hose entirely, you would find the pressure inside the hose (and indeed, everywhere in your hydraulic system, if the hight differences are irrelevant) will be 30 psi. If you were to open the end just a little bit, you'd find that the pressure is still pretty much 30 psi. Only until quite a lot of water is flowing would the pressure drop from 30 psi; this is because at high currents, the friction of the water flowing in the hose becomes significant, and increasingly more of the pressure is lost over the hose's resistance as the current increases.

If we wanted to model the hose-thumb system electrically, we'd need to take into account that the hose has some friction. Maybe something like this: 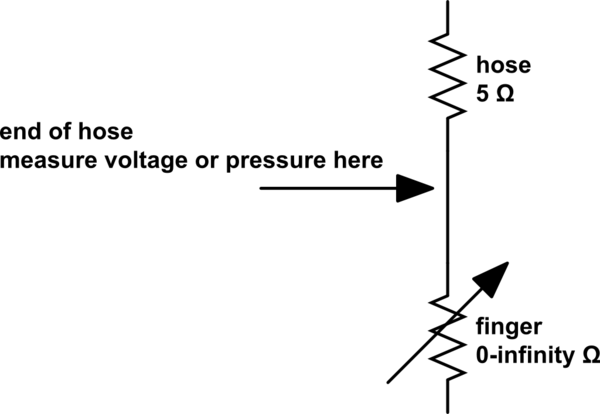 but in a hose, decreasing the hose diameter (current) would increase the water pressure (voltage).

So with that explained, we can circle back to your confusion. It depends on where you measure the pressure. You probably know that if you totally block the hose, the water pressure does not rise without bound (your pipes would burst!). Using thinner or longer pipes actually decreases the water pressure available at the spigot (or appliance, or whatever is connected), because more pressure is lost to friction between the supply and the spigot. There's an electric analog: higher currents require fatter wire.

Every analogy can be dangerous because is difficult to consider all things. It helps you understand, but you cannot consider it as a perfect model. Resistor will limit current considering you have a fixed source voltage. The ideal source voltage will not variate.

In the case of a fixed pressure (voltage) accross the ends of the pipe, the flow rate (current) will go down as the constriction gets more narrow (resistance goes up), just like it works with real resistors too.

Not the answer you're looking for? Browse other questions tagged resistors resistance theory or ask your own question.

3
Understanding Electrical Engineering with Analogies
4
What corresponds to a resistor in the hydraulic analogy to current?
0
Voltage vs current vs resistance - did I understand them right?
4
Why having two resistors (1k and 10k) in my circuit works?
2
Calculating resistance for piece of metal
3
How does a transformer increase voltage while decreasing the current?
0
How can you visually model voltage vs. current?
0
using big resistors vs small resistors for voltage divider