I know it's been asked 1,000,000 times how/what/why transistors work and I feel like I've read every answer but I still struggle with the basics. The struggle for me is the difference between transistors for switching and transistors for amplifying.

For switching, I gather that the base needs a certain voltage to allow the current to travel through. Say the voltage required is 1.5 volts and you give it 15 volts, does that affect the current between the collector and emitter?

For amplifying... Can only specific transistors amplify and specific ones switch? Also, one of my biggest challenges is grasping exactly how it's amplifying because it feels like something from nothing. I guess a good example logically is an electric guitar. You have a low voltage signal from the guitar and a high current feed to amplify it. Now are you using the power of your high current feed and in a sense mixing it in with you guitar signal to boost it? Also, if you had a pot to adjust the signal amplification, what exactly would you be adjusting, the current or voltage supplied.

The most common model of transistor operation is the current-amplifier model, like all models it is something of a simplification and it represents just one way of viewing the way a transistor works. I'll assume your question is in the context of a typical silicon NPN bipolar junction transistor (BJT) used in a common-emitter configuration.

For switching, I gather that the base needs a certain voltage to allow the current to travel through.

This is more or less correct, however the range of useful voltages is very small - you might as well think of it as fixed at 0.7 volts with tiny variations in normal use. This voltage is usually called Vbe (voltage across base and emitter). So long as the base voltage is enough to allow current into the base, the transistor can begin to operate. The more base current, the more current is able to cross from collector to emitter. like a valve, small amounts of base current allow large amounts of collector current. The ratio is known as the gain and might be 100x. Eventually the collector current reaches a maximum and the transistor is said to be in a saturated state. For switching applications you want to quickly drive the transistor into saturation (turning it "on") by quickly raising the base current to a suitable value.

For amplifying... Can only specific transistors amplify and specific ones switch?

are you using the power of your high current feed and in a sense mixing it in with you guitar signal to boost it?

No, that's not a useful way to think about what is happening. Think of a small flow of water turning a valve against a spring and controlling the a larger flow of water. It's about controlling not mixing.

if you had a pot to adjust the signal amplification, what exactly would you be adjusting, the current or voltage supplied.

Both usually. Voltage and current are dependent on one another. In the case of a resistive load they are related by the ohms-law equation V=IR. For a constant R, increasing V increases I (I=V/R).

Lastly I read that you can increase voltage and current with a transistor.

As I said, the most common model for understanding transistor behaviour describes the transistor operation in terms of current amplification. However you can usually find a way of converting a current into a voltage.

Is it possible to increase voltage and current above that of any of the supplies?

The voltage at the collector of a transistor in common emitter configuration cannot be made greater than the supply voltage (Vcc) by the normal operation of the transistor itself.

Note: With an additional inductor you can create a circuit that creates higher voltages but this isn't an intrinsic capability of the transistor itself.

first of of all you should try to understand about the DC load line of the transistor then if you make a transistor to work as a switch.According to TTL logic family a logic 1 means a +5V(From 4.5V to 5V) and logic 0 means 0V(0V to 0.8V) if a signal takes a voltage above 0.8V and less than 4.5V it is neither 'logic 0' nor 'logic 1' so when we are designing transistor switch we must be careful about the logic output voltage from the transistor switch.

DC load line: a line drawn between the cutoff point and saturation point of a transistor.(cut-off means switch is in fully off condition saturation means fully on condition)the region in between cut-off and saturation known as active region.when you want to make a transistor to work as an amplifier then, it should be working within this region ;if it goes beyond the active region we would get the amplified signal with clipping.

and we know, transistor is a current controlled device the small change in the base current would be beta times magnified and would flow through collector terminal(once the B-E junction gets voltage above 0.7 then, you should look at the current flowing through the base terminal and could find the current through the collector terminal by knowing the value of beta of that particular transistor in practical the Beta value for a same part numbered transistor would vary even they are from same company/batch. these things must be considered when we design circuits) 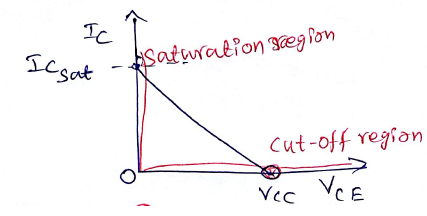 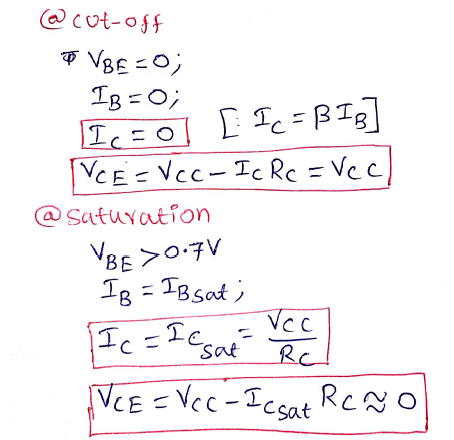 A transistor can not produce output voltages or currents beyond those available from the power supply. When a small input stuff is present, the transistor will permit a larger output stuff. The stuff may be voltage or current, depending on the particular configuration, but the point is this: at some point it's all the way on or all the way off. Like when the throttle on your car is all the way open, pushing the pedal harder won't make it go faster, and the speed your car can obtain is limited by the engine, not the throttle.

When using a transistor in a switching application (such as digital logic), we want the output voltage to be high or low. We never want the circuit to be stable in some state between these binary states, and we want the transition between them to be as fast as possible.

This is accomplished with amplification. Look at what happens as a sine wave is progressively clipped more (images from A Musical Distortion Primer, though don't think that this is relevant only to music):

The higher the amplifier's gain, the more clipping there will be, because a smaller change in input will be necessary to get the output all the way to the limits set by the supply voltage. And, we can see that as the clipping becomes more severe, the sine wave starts looking more like a square wave. In fact, if the gain is infinite, everything looks like a square wave: exactly what we want to accomplish with "switching" transistors.

Now, I will answer about the BJT transistors.

There is no general difference between the switching and analog transistors. Every of them can work pretty good as switch or as an amplifier. The differences are in the details.

At first the schematic where the transistor is connected determines the operation mode of the BJT. For example, is the transistor saturated or not, what is the collector current, what are the impedances of the external elements, what are the parameters of the input and output signals, the voltage of the power source, etc.

Note, that there are even more types of transistors, with parameters optimized for other uses, for example so called "avalanche transistor" that is aimed to work in CB-junction avalanche break-down mode. There are also so called high-voltage transistors, that to withstand high CB voltages (even in price of worse other parameters).

2
Resistors and the water analogy

38
Why do we need so many transistors?
0
How do we have a fixed current in this case?
1
How does a junction-less transistors work?
8
Amplifying a PWM signal with an op amp. Is the slew rate a problem?
1
Make a real world example with a NPN Transistor
0
Differential amplifier (transistors): Which input is inverting?
1
Do transistors work in reverse?
8
Why do most guitar amps have a preamp and a power amp section?
1
Problem with class-A amplifier