What to do when a device doesn't specify it's DC polarity?

This is probably a very simple question but.. I've been trying to find replacement AC->DC adapters for various electronics around the house, but I ran into one which doesn't list its polarity. It simply has "12V 𝌂" printed next to the power socket, without either of the polarity symbols! I found the owner's manual online and checked it, and it wasn't any more specific..

.. So, what does it mean when a device doesn't list its polarity? Is there a default assumption of positive or negative? Or does it mean that the polarity of the power doesn't matter??

If you have a device that is not marked, you can't necessarily assume one polarity or the other. I have, for example, electronic music keyboards and MIDI controllers which sometimes are swapped (Casio is center negative on one, Korg and Yamaha are center positive).

If you have the original adapter, check what its polarity is, either by its label or use a voltmeter to determine its polarity.

If you don't have the original adapter, you could try assuming that the device is center positive, but you risk causing damage to it if it does not have polarity protection. Instead, consult its manual, look online, or as a last resort, take it apart!

If you have an adapter that isn't marked, determining polarity is simple with a voltmeter. If you get a positive voltage then the side connected to the black/common terminal of the meter is negative/ground.

If the device has any metal part or other known ground point you can use the continuity test function of the multimeter ("the beep") to check if the center contact or the outer contact of the power supply socket is connected to ground.

As JYelton mentioned in his post, you should not assume the polarity.

12V 𝌂 means that the adapter outputs 12V and the symbol next to it means "DC". 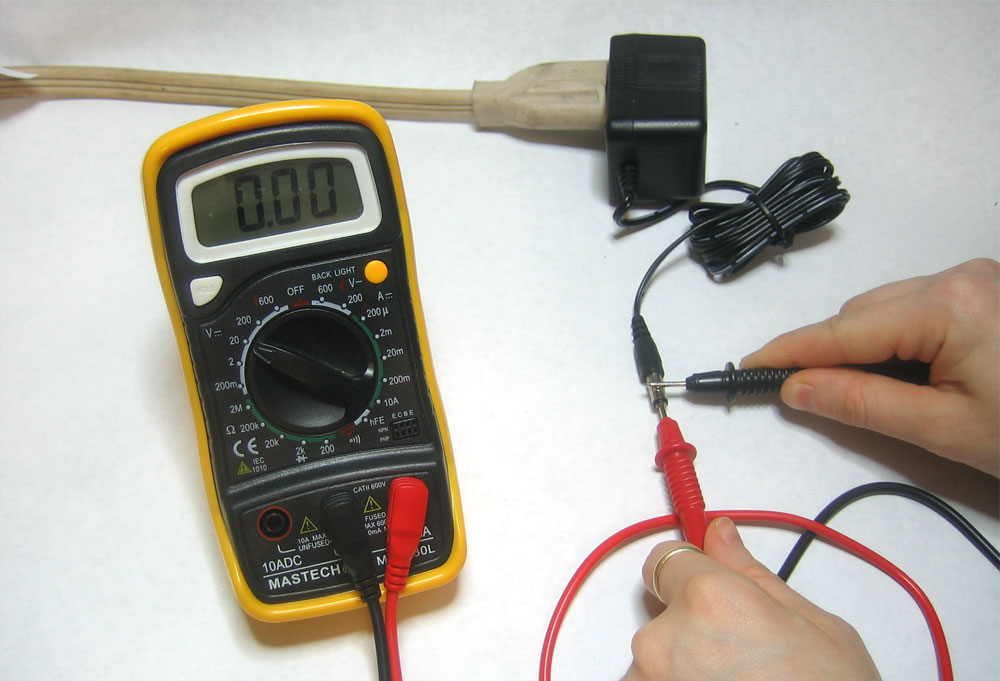 If looking to buy a multimeter here is another post to refer to.

Another way to test the polarity is by using LED and resistor if you don't have a multimeter.

Wire up a LED + 1K ohm resistor like the image below: 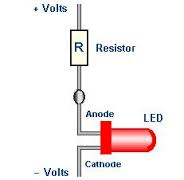 Note the polarity of the LED; the flat side of the LED is negative. Polarity of resistor doesn't matter.

Now connect the other end of the resistor (top of the diagram) to the center conductor and the LED flat side wire to the outer conductor of your adapter.

If the LED glows then your center conductor is positive and outer is negative.

If LED doesn't glow reverse the wires. If LED glows in this case, then your center conductor is negative and outer is positive.

If LED still doesn't glow, check your wiring and your adapter.

If you have LED + resistor and no multimeter, you should get one. 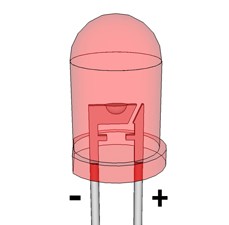 I have suggestions for anyone with this problem. Take the device apart and trace either of the input paths to any polarized component and then verify with a meter. It is best to see if you can do this multiple times or on each line.

If this proves to be too difficult you can also try detecting a DEAD short from a polarized component to an input terminal. This is usually easiest with negative. Put the meter probe on a negative terminal of a polarized component and see if it is a dead short to either of the input terminals. If it is not a dead short (almost infinite resistance) keep looking. A TINY bit of resistance on your highest scale may indicate the resistance of the wire and connections between the component and the input but be wary of much more than double the resistance of your meter's leads touched together.

Electrolytic capacitors, LED's, PCB markings, red and black power input wires, and outputs to polarized dc motors or linked PCB's can all be used for this purpose.

I have the same problem with a 12v cooler/heater by Mobicool. The input just indicates 12v dc with no polarity. The manuals I found online have nothing to say about it either. I have not taken it apart yet but with the above techniques it will be easy I am sure. Well, as easy as they make taking it apart and putting it back together in the first place. 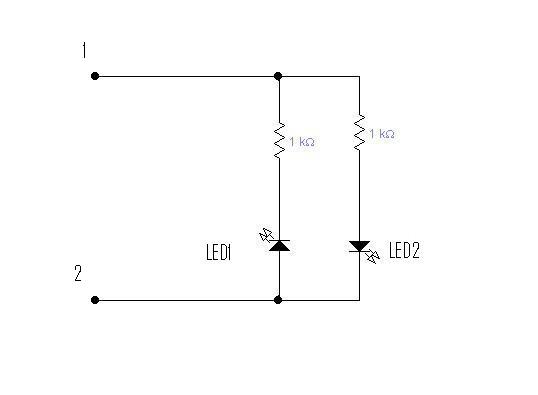 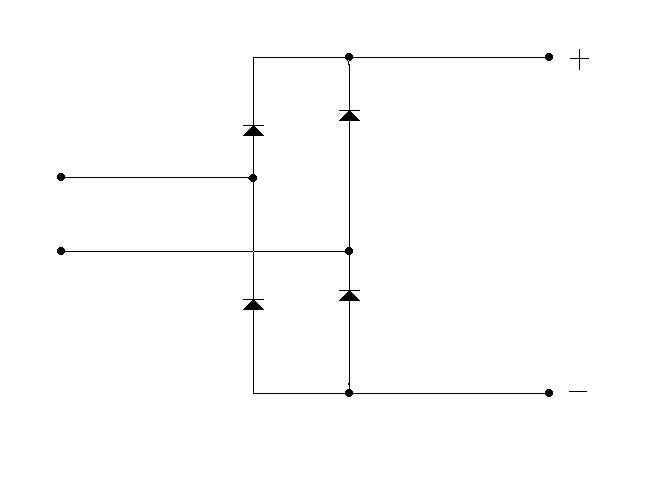 No matter what is the input (dc or ac power source) you got a positive voltage with marked polarity, just all

Not the answer you're looking for? Browse other questions tagged dc polarity wall-wart or ask your own question.

4
Multimeter reads negative even without leads

2
My robot's motor has begun to spin slower, but it works perfectly if I use a different adapter with more voltage.. what does it mean?
4
Does my device need reverse polarity protection?
2
What do you call a device that reverses polarity?
0
DC Connector for medium voltage PSU output
1
Wire gauge for low voltage, high current DC application
0
Electromagnet Polarity Reversal Doesn't Matter?