I'm thinking of making 2 separate circuits of 3 LEDS with each having their own 9v battery, if that makes it easier to do rather than 6 LEDS on 1 9v.

What exactly are the steps to get this done using a switch in between as well.

As of now my plan is: ( I Tried drawing a diagram here)

Wire postive end of 9v battery to a switch, then from there connect the switch to the first LED, using copper wire, i'd solder the wire to each consecutive LED, until I have all 6 connected. The from the last LED I'd connect the negative end to a resistor, and finally add a wire connecting the resistor to the negative side of the battery. Would this work?

Here is how you can wire your LEDs. The resistors used are 150 ohms and 1/4 watt. This is assuming that you have 20 ma flowing through each LED. 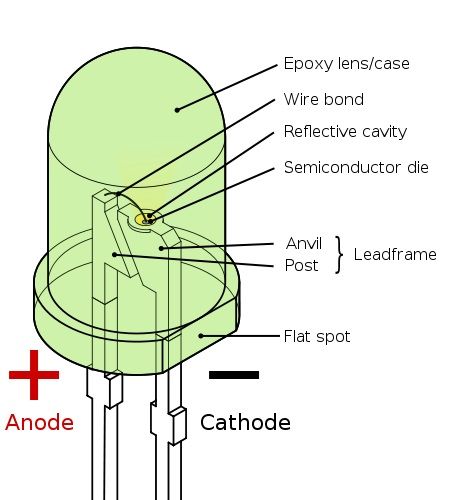 The LEDs have a rating current which can be found in datasheet or asking from provider or etc. when you say 2volt LED, it means that its rating voltage is 2and also it almost locks on 2V.

as Vazquez said you can not put 6 LEDs in series against 9v. One way is tu put two 3LEDs in parallel that each 3LEDs need 6v. Now we subtract 6 from 9 volt source voltages. We'll have 3V.

now with this 3V we use ohm's law and find the appropriate resistor:

The schematic you showed won't do what you want. Notice that every other LED is reversed. LEDs need to be forward biased to make light.

Another issue you are ignoring is that the voltage of all the LEDs in series is more than your battery. You want to light 6 LEDs, and you say these drop 2 V each. With all of them in series, they would need around 12 V.

A simple solution is to arrange the LEDs in two strings of three each. In each string, there are 3 LEDs in series. That means a string will require around 6 V.

Let's say you want 20 mA thru each LED, which also means thru each string. With 9 V, there is 3 extra voltage to drop in addition to the 6 V dropped by the LEDs. This can be done by a resistor. You know the voltage across it will be 3 V and the current thru it 20 mA. By Ohm's law, the resistance should be (3 V)/(20 mA) = 150 Ω. Each string should have its own resistor.

Run two strings in parallel from the 9 V battery. Each string will draw 20 mA, so both together will draw 40 mA. A 9 V battery can handle that for a while.

No. You have a total Vf of 12V, but a supply of only 9V. You will need to create 2 parallel chains, and use resistors to limit the current through each chain.

0
Connecting 5 12V LEDs in a parallel circuit
0
9v battery to parallel 3v LEDs - burnout
0
Different LEDs in parallel
0
How does this string of LEDs work?
2
Wiring LEDs in parallel with 5-pin LED on/off switch
2
How to use a transistor to drive strings of LEDs from GPIO pins?
0
How to wire LEDs and CR2032 battery to make it work
0
Switch Rating for 50W LEDS
0
wire rotary switch with leds that turn one at a time
0
How to toggle two LEDs with a minimum of components?