How do you deal with worn wires?

The left side has a break in one cable's shielding (the wifi antenna most likely, as it's connected to a "broadcom" chip.

The right side has a worn shielding on the wire so bad that a wire was showing - Most likely the reason this unit gives ugly yellowish-flickering that only went away by adjusting the laptop screen's angle.

These were both breaking right where the hinge moves, so I was wondering, is this a common problem on all moving-wire electronics? One cable seems to have cloth-type covering over it, and I didn't see any damage to it - what is this covering called, and can I add some to the wearing cable to prevent further damage? Or would a spot of silicone plastic sealant work as well?

At step 30 of iFixit manual he's holding this wire and saying it's microphone wire: 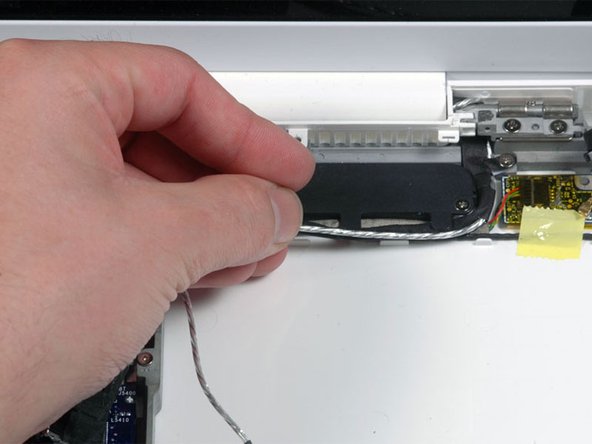 So most likely this isn't the real problem, unless microphone wire is interfering, something's probably breaking elsewhere.

Update: You can remove the small plastic piece with a half-circle hugging the hinge, but that doesn't seem to make much or any difference in my case.

These were both breaking right where the hinge moves, so I was wondering, is this a common problem on all moving-wire electronics?

It becomes a problem if it is not handled correctly by the design. Non moving cable parts should be fixated so they don't get worn by vibrations. The wear can occur on the insulation or at the joints, at a connector or PCB. Moving cable parts should be allowed to move freely (within the cables specified allowed bending radius) or be protected by some means. Flexible pcb's, cable carriers, cable chains and reinforced insulation are common techniques.

One cable seems to have cloth-type covering over it, and I didn't see any damage to it - what is this covering called, and can I add some to the wearing cable to prevent further damage?

It is probably braided cable sleeving. Can be made of fiberglass, cloth or even steel. Check for "wraparound" sleeving if you want to add it to cables which aren't possible to detach.

Or would a spot of silicone plastic sealant work as well?

The important part is to understand what is causing the wear (heat, friction etc. ) and what kind of damage that has already occurred. If the insulation is broken on several conductors close to eachother, it is usually a good thing to take the conductors apart and reinsulate them individually.

Given the tight design specs Apple uses in their MacBooks, adding covering to a wire might not fit, much less fix anything. Replacing the part in question is what I'd recommend. You might want to check out iFixIt.

Not the answer you're looking for? Browse other questions tagged wire physics physical-design or ask your own question.

17
How do you remove insulation from headphone wires?
3
Are jumper wires just wires with insulation cut off on both ends?
2
Replacing wires with threads?
0
How to “frankenstine” wires?
1
How to size wires and fuses correctly
15
How did scientists deal with electronics' problems before Kirchhoff and Ohm's laws?