I am interested in a project which aims to detect any object within short distances, at various directions. Hence, the sensor should be highly directional, fairly accurate and if possible, compact. Among the available ultrasound and IR sensors, which technology would be better and why?

The primary aim of this sensor is to assist a visually impaired person with moving around on his/her own.

A laser-based "virtual cane" for the blind is a very sensitive option for travel assistance to the visually impaired. It is far more precise than an ultrasonic sensor, and also much smaller and less power-hungry.

The concept dates back to the 1950s (not using lasers, just incandescent narrow-beam lights), and practical laser cane implementations are known of dating back to 1975 (the Bionic Instruments C-5 cane): 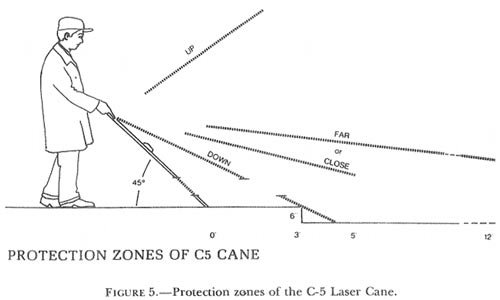 A contemporary version with weeks of operation per charge is being actively developed and promoted by the Hebrew University since around 2010. This Youtube video shows a live demonstration: Virtual Cane for the Blind, Presidential Conference 2011.

Laser holographic pattern based distance sensing (ranging) has been in use in cameras since at least 2004, such as in the Sony CyberShot F828, possibly in earlier models as well. The laser unit in the F828 comes out pretty easily (I liberated it from my broken F828), but isn't a self-contained object detection device: It merely provides a specific laser emission pattern, which Sony's Hologram Laser AF technology uses through-the-lens to determine not just distance to subject, but also depth of subject where feasible, in order to compute desired depth-of-field for aperture settings.

In popular culture, the TV show Covert Affairs has a key character, Auggie, using a laser cane that apparently emits and detects a pattern very similar to Sony's Hologram Laser AF system. This device may exist in practice or merely be fictionalized, but the technology is easily available, and in design labs, today.

A project I have consulted for, by a disability research organization in Delhi, India, uses a 38 KHz encoded IR laser diode with a "cross" output profile, and a honeycomb arrangement of 6 IR proximity sensors (Vishay TSSP6P38), to detect and indicate direction / dimensions of nearby objects. The range, however, is far lower than the desired 5 meters in the question: It works well for range and shape up to around 1.5 meters, and major obstructions such as a wall or a bus can be sensed as much as 10 meters away.

This tiny hand-held (plus wrist-strap) device provides feedback to the user via a piezo bender on the wrist strap, driven by a Texas Instruments Piezo Haptic driver (DRV8862, I believe). The complete device at this time costs an estimated $250 or so per unit to hand-manufacture, using single-piece purchases of all components from sources like eBay. Mainstream vendor MoQs and shipping costs to India preclude conventional commercial sourcing for the funding organization. (The above figure does not include engineering and packaging costs).

Unfortunately, this too is too high for Indian budgets, hence the project is hovering in the twilight zone for over 6 months now.

This last bit of information will hopefully indicate that a properly funded, mass-manufactured project should easily be able to produce a laser cane well within $100, pretty much within a couple of months. It's odd that this doesn't seem to be an ubiquitous product yet.

For use as a helper for blind people, ultrasonic sensors are used since 1960's. The reason is simple - the ultrasound technology allows the distance to the objects to be easy measured.

Recently, optical sensors (using lasers) that can measure the distance are invented, but never the less, their schematics and processing algorithms are more complex. In addition, the energy consumption is higher, which is not good for mobile application.

Not the answer you're looking for? Browse other questions tagged infrared proximity-sensor ultrasound or ask your own question.