Does anyone know the equation that relates current to voltage for a specific tunnel diode(can be any tunnel diode)?

I know these are old tech but I can't seem to find a relationship anywhere, all the info on tunnel diodes seems to be about the quantum mechanics involved.

You are unlikely to get a single tidy expression due to the non linear nature of the beast and its "discontinuous" stable transfer function - which is what it's all about.

Some equations here near 1st diagrams.

The "magic" part is the negative resistance region - shown in red below. 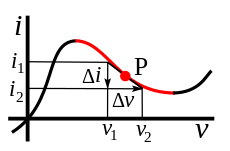 Below is the classic Esaki diode / Tunnel diode transfer function and you can try to fit formulae to that if you think it useful. Unlike most other devices you cxan have the same current at 3 different voltages - with two being stable, and the intermediate voltage being a transient one due to it being in a region of negative resistance. 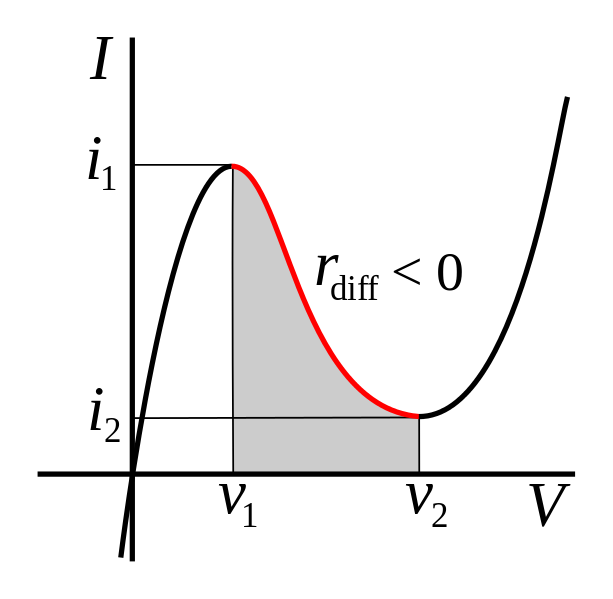 You could model this as something like y=x^3 with some offsets and shape adjustments but that would be missing the main point of the device.

Here is a completely made up example. The formula is shown below the graph. This was made "by eye" solely on the basis of approximating an Esaki diode V/I curve. By adjusting parameters you could probably get a "close enough" fit to a real diode.
I doubt if this equation is especially useful but it does allow you to get a rough model of a real device. Axis units are semi arbitrary - adjust parameters to suit.
If you increase voltage above the maximum seen here you'll get a nasty shock due to the (5-Volts) term - no suggestion that this occurs in real life :-) 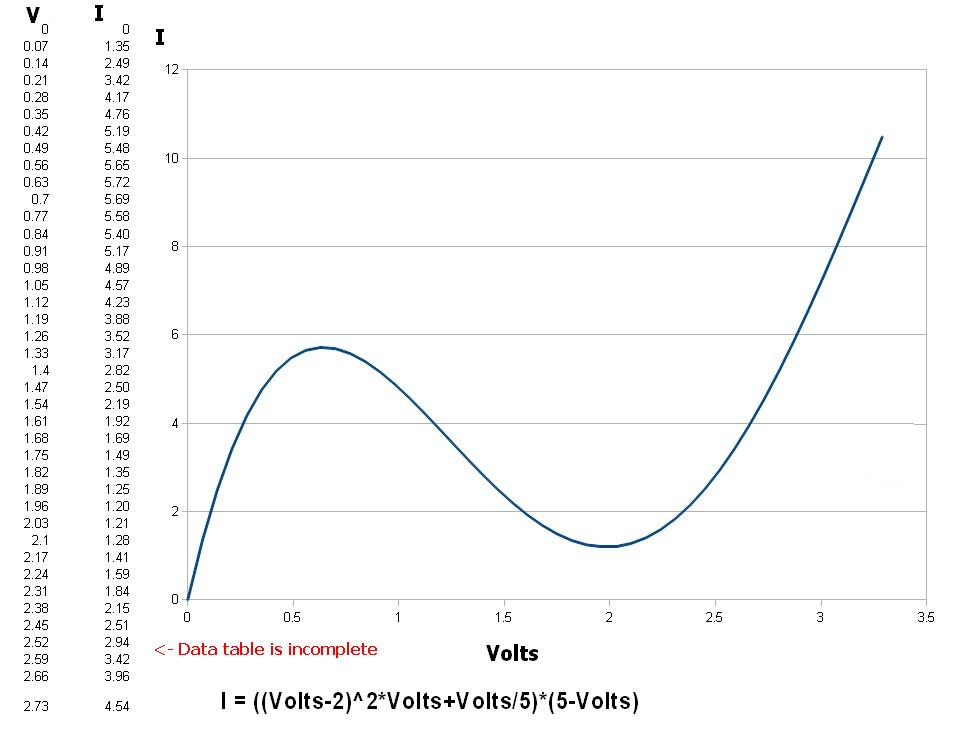 Plot an energy versus velocity curve for a mass approaching and exceeding light speed.
For mass use standard
M_relativistic = Rest_mass/(1- V^2/C^2)
Use Energy = 0.5 m x v^2.
Ignore (for now) complex-imaginary aspect for V>C.
eg assume for now that jE = E.
Plot energy against V. Wow!
Ponder.
-> You get a tunneling type curve with two velocities > C that have the same energy as a point for V < C for values of V only above a certain % of light speed. E goes to infinity at V=C as expected. BUT the curve is suggestive of a tunnel effect across C with two velocities > C with the same energy. There's more, but that's enough OTW already :-).

Implications of the tachyonic jE are, of course, unknown.

Take a look at this paper right here.

One of the simplest, V-I characteristic curves for the (Esaki) tunnel diode is given by the following equation:

Where Ip is the Peak current, I(s) the saturation current, Vp is the Peak voltage, V is the Applied voltage, q the charge, K is Boltzmann constant, and T is the Temperature. When V(p)=V(as in DC), the tunnel diode current becomes equal to the ideal diode equation.

The negative resistance is given by the equation:

22
Difference between a rectifier diode and signal diode
0
Diode peak reverse recovery current
6
how to calculate recombination lifetime for holes for a specific diode?
1
Built in potential of a pin diode?
3
What do these diode markings mean?
2
P-N Diodes in series. Is my solution correct?
1
Can you identify this diode? (vintage audio amplifier)
0
How to read Diode Numbering System
6
Diode forward current with µV..mV forward bias
0
Diode-connected BJT vs base-emitter BJT diode vs diode