How viable is it to just use 1% resistors and calibrate out the error?

At the moment, I use 0.1% resistors to get accurate voltage measurement through a voltage divider. However, the cost is high, so I was thinking of using 0.5% or 1% resistors and calibrating out the error in software by using a precision voltage reference during production. Has anyone done this successfully? What pitfalls might I encounter?

Rx is some unknown resistance (probably a sensor of some kind). And you're using R_fixed at 0.1% right now in order to effectively calculate R_x, but you want to use a cheaper fixed resistor with a lower tolerance of perhaps 1%. In doing so you want to perform some kind of calibration during production to correct for the increased error, is that right?

The way you end up doing this is putting an byte in EEPROM (or some other non-volatile memory) that acts as an "offset" in your calculation, and it's a perfectly viable thing to do. The thing is it's going to cost you some time during production to do the calibration activity. In order to do the calibration, you'll need one of those 0.1% resistors (call it R_cal) of nominally comparable value to your 1% resistor to substitute into the circuit for R_x. Measuring V_sensed, you can infer more precisely the value of R_fixed (i.e. to something like 0.2%).

If R_cal and R_fixed are nominally the same value, you would expect V_sensed to be equal to Vcc / 2. You would store the measured deviation from Vcc / 2 as a calibration offset byte, and always add it to V_sensed as perceived by your ADC.

The pitfall, as I see it, is that there is a bunch of work involved in doing the measurement and subsequently in storing the value. Another thing to consider as a pitfall is that temperature can play a role in causing a resistance to deviate from it's nominal value, so you'll want a reasonably well temperature controlled calibration environment. Finally don't forget to use calibrated measurement equipment, as that's another potential source of additive error. One last pitfall I can think of is that the calibration byte should be stored in units of the lsb of your ADC (so if you have a 12-bit ADC, units of calibration offset byte should be "Vcc/2^12 Volts").

If you are using two fixed resistors to divide a large voltage down to a lower scale as follows:

So now you want to use a precision voltage reference (call it V_cal) to stimulate V_in during a calibration step in production. What you've got there is in theory:

But what you've got in reality is:

In effect you have a different transfer function slope in reality than what you would predict from the resistor values. The deviation from the predicted divider transfer function will be linear with respect to the input voltage, and you can safely assume that 0V in will give you 0V out, so making one precision voltage reference measurement should give you enough information to characterize this linear scale factor. Namely:

And you would use slope_actual as your calibrated value to determine the voltage in as a function of the voltage measured.

To get the actual slope sensitivity to resistor values requires partial differentiation: 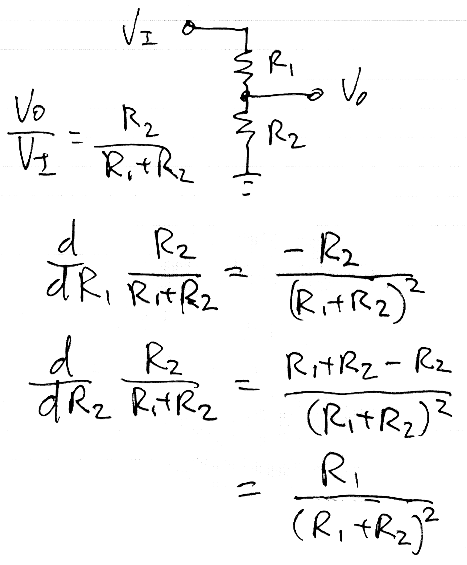 By me, it will be difficult, however not impossible.

That approach works well going from 5% to 1%. Going from 1% to 0.1%, I suspect that you will start to have your accuracy ruined by temperature fluctuations changing the resistance and thus the voltage.

If, for some unknown reason, you're operating in an isothermal environment and your resistors are all constant current, so self-heating is predictable, it's still viable.

You can calibrate out:

But do not forget about all the other tolerances:

* Note that all values can differ between resistor brands and products.

Not the answer you're looking for? Browse other questions tagged calibration or ask your own question.

0
Can calibration improve the accuracy of a circuit?

1
Calibrating a multimeter without another multimeter
2
How to calibrate the MLX90616 IR temperature sensor?
0
A homemade programable voltage calibrator
0
How can I calbrate my power meter?
3
Calibrating ADC for calibration-free temperature measurement
0
Why does gyroscope drifts and is it possible to use position based calibration to calibrate it?
2
Offset Error Changing after Calibration of Output
0
How to calibrate any magnetometer when sensor is changing the location?