What is negative Resistance

Negative Resistances is a behavior in which the current and voltage are inversely proportional to each other. A normal circuit with a resistor following ohm's law has a current drop, when the voltage decreases. In case of a negative resistance, the current increases with a voltage drop.

In this graph below, you can see the region where the element shows a negative resistance behavior. 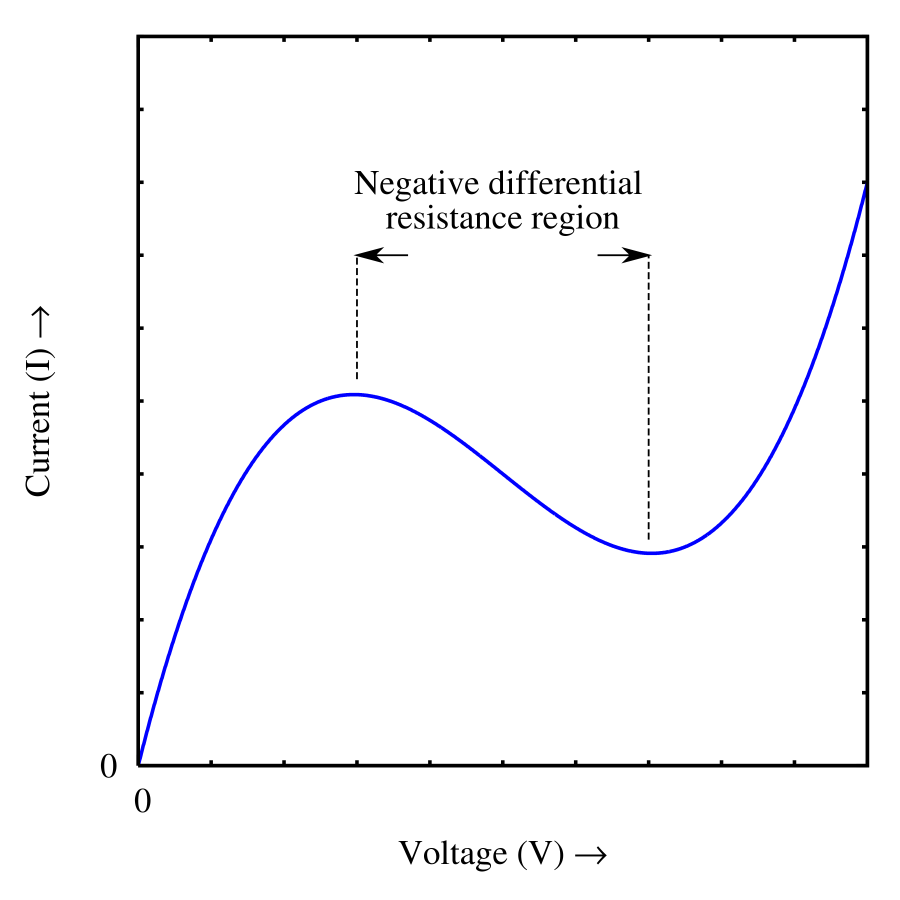 I think tunnel diodes and some other kinds of diodes exhibit this behavior.

To understand negative resistance, start with what a resistance actually is. For any normal (positive) resistance, it is a measure of how much voltage builds up accross the resistor as a function of a known current. This is exactly what Ohm's law describes:

Or put into common units:

In other words, a Ohm is one Volt per Amp. If you pass 1 Amp thru a resistor and that causes there to be 3 Volts accross the resistor, then you have a 3 Ω resistor.

A negative resistance is no different, just that the sign of the resistance is negative. If you put 1 Amp thru a -3 Ω resistor, you get -3 V. The reason this may sound unintuitive is because these thing don't exist sitting around in nature. I remember Professor Gisser in college explaining negative resistance. He finished by saying "I have a jar of them in my office. You can come by later and see some if you want.", then looked around to see who laughed. Surprisingly, there were a few who sat there with blank stares wondering what was so funny.

Clever circuitry can emulate negative resistors, limited to a specific voltage and current range. That circuitry is always powered, though, and what is connected to it will recieve some of that power.

There are passive devices that are said to exhibit negative resitance, but what is really going on is that the slope of the Volts as a function of Amps curve is negative in some region. The actual magnitude still remains positive, which is another way of saying that the Volts as a function of Amps curve remains in the first and third quadrants (where the device absorbs power instead of sourcing it). Certain types of diodes and the base of a unijunction transistor exhibit negative slope over some part of their V/A response. These are sometimes called negative resistance devices, even though that refers only to their slope over a limited range.