I was reading a chapter on Step down Choppers(Buck Converters). I had trouble understanding the operation of the circuit as it wasn't explained properly in the book. When I looked up on the internet , I noticed that buck converters had Capacitors in parallel with resistor as the load.

However, the book doesn't mention the capacitor . No capacitors are included in the diagram either. The load is simply a resistor. (I have a crappy camera so can't upload a picture.)How would this circuit operate?

Here is an idealized buck converter without a capacitor: - 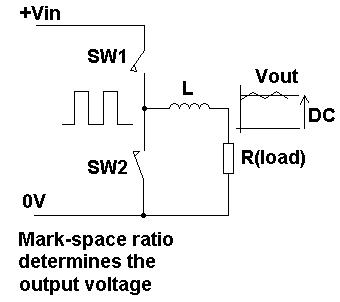 Forget about transistors for the minute and concentrate on two switches, SW1 and SW2. These take turns at switching and never switch on at the same time. If they take equal turns the junction of the two switches will be a square wave; it has a positive peak of +Vs (when SW1 closes) and then returns rapidly to 0V when SW2 closes.

So, altering the ratio of the timings between SW1 and SW2 can produce different DC levels on the load. This type of regulator is called a synchronous buck converter and these are the flavour of the month; they'll have two FETs in place of SW1 and SW2 and can be made to alternate at well over 2MHz.

Why the high frequency? the triangle shape superimposed on the output will get smaller as you increase the frequency and, you might as well capitalize on this by picking a smaller and smaller inductor and living with a little bit of ripple (application dependant).

Adding a capacitor across the load has a benefit of course because it helps reduce ripple to an even lower level.

This is the easier of the two common buck topologies to explain because the output inductor (and capacitor) and resistor form a simple low pass filter that turns the square wave into a near-ripple-free DC level. Non synchronous buck regulators are a bit trickier to understand because they don't use a FET at SW2, instead they use what is known as a flyback diode.

Not the answer you're looking for? Browse other questions tagged dc-dc-converter buck power-electronics or ask your own question.