How to make whole top side of project box glow uniformly?

I have a transparent project box encasing my breadboard with an LED on it. I want to use this LED to make the whole top of the box glow uniformly. Does anyone have any ideas? I tried using soft plastic, about 4 mm thick and drilled a whole halfway through it for the LED. Even after using sandpaper, you can still clearly see where the LED is, and the illumination is a quarter of the box, at most. The box is about 5x7 cm.

I do a lot of lighting projects for props, theater, and holidays (like Halloween). "Glow" effects are frequently wanted, so you have to diffuse the light source in order to avoid having the point source visible.

There are several ways that I do this, so I'll just list some of the techniques here:

For those curious, based on comments, here is the link to a datasheet for the Acrylite Endlighten product. I'm sure other products designed for edge-lit glow applications are similar.

The product specifically calls for non-diffused LED light sources, to minimize losses injected into the material. Here's an excerpt: 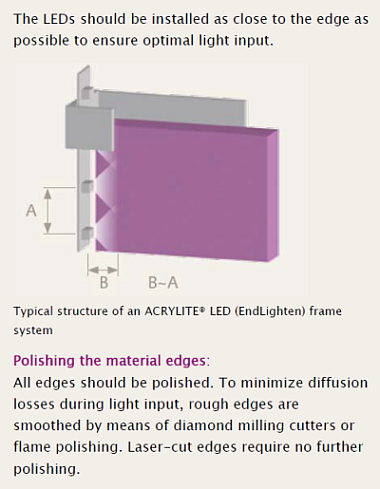 The main feature of such an acrylic sheet is that it has small particles suspended in it which diffuse the light and "throw" it perpendicular to the source. You can achieve similar glowing effects with a translucent "soft white" acrylic sheet, but obviously this product is designed more specifically.

* I am not affiliated with Evonik Industries in any way.

Not the answer you're looking for? Browse other questions tagged led enclosure or ask your own question.