How are LEDs timed? (How is the pulse latency measured?)

Please excuse the awkward phrasing of the question; it seems that LEDs have pulse latencies of nanosecond and sub-nanosecond durations. The question is, how was it possible to measure such precise increments of time? Is there ultra-high frame rate footage of this?

An inexpensive method of measuring rise and fall time limitations of an arbitrary waveform, is to start with a square wave of a moderate frequency, and then systematically increase the frequency while keeping duty cycle constant at 50%.

The average intensity of emitted light is easily measured, even by using something as basic as a CdS light-dependent resistor (LDR) cell.

As the switching frequency increases, rise and fall slopes become dominant factors in intensity of resultant signal, as illustrated in the graph below: 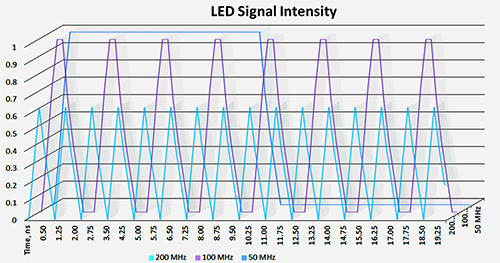 Note that the rising slope, and separately the falling slope, are nearly identical for signals of 50 through 200 MHz. What changes is the amount of time per cycle the signal stays high, or low. At 200 MHz, the LED intensity never reaches the plateau at all.

In the experiment from which the graph was taken (the paper is not publicly accessible), the average measured intensities were reported as:

Thus, with fairly low tech, non-exotic means, the sum of LED rise and fall times can be determined.

To distinguish between the rise and the fall time values, the same exercise is repeated with different duty cycles, alternately minimizing the "on" plateau, and the "off" plateau to insignificance. Thus, the contribution and thereby the duration of each of the edges can be determined. I don't really understand the math of this last bit, so I'd leave it to someone else to explain it.

It is possible to measure optical pulses of LEDs and Lasers to picosecond resolution, and it is something I do regularly as an electronics/photonics person. The trick is to work in the time domain.

To give an example of this, I have seen photodiodes exhibiting bandwidths of GHz, 40 GHz is quoted by a previous answer. However, I would imagine such a detector being quite expensive, and secondly you would need an oscilloscope of a matching bandwidth to record the resultant waveform for analysis (which would be horrendously expensive, I have only ever seen such scopes loaned on a day by day basis!).

Time to Digital Converters (TDC) have resolutions of 100ps or less, with modern low cost devices typically having ~30ps resolution. Single photon detectors often have electrical resolutions of a similar order, hence time measurements are feasible (without silly budgets!) to ~30ps. A technique known as Time Correlated Single Photon Counting (TCSPC) can then be utilised to measure the optical pulse of the LED to a resolution determined by the experimental setup. TCSPC is essentially just the histogramming of time differences between two TDC channels. I.e. measure the time difference between two signals a million or so times, and form a histogram of time differences.

The process is as follows:

There are some very good documents and books by Wolfgang Becker of Becker and Hickl (freely available) which describe this process and others in far more detail.

Photodiodes are pretty fast. They are used in optical cable communications exceeding several giga bits per second. I've only ever used them at sub giga bits per second but I believe they should be able to measure a period of light that is below 0.1 nano seconds (which is certainly acceptable for most standard LEDs and quite a few laser diodes).

Frame rate footage of an LED being lit and extinguished isn't really required to determine it's ability to pulse light I would have thought.

Measuring time down to periods of pico seconds is something that is beyond my knowledge so maybe someone else will cover this.

They use photodiodes and other high speed optical detectors. You can get photodiodes with very wide bandwidths. This one has a 40 GHz bandwidth, so it should have a rise time of around 9 picoseconds or so (BW is approx. 0.35 / rise time).

Not the answer you're looking for? Browse other questions tagged led timing latency or ask your own question.

49
What is the latency of an LED?
26
Does (and when how) the lifetime of a LED depend on the PWM frequency

7
6x UV-leds in parallel turning on and off when they should be on all the time
4
Uniformly illuminate an array of LEDs: how to get the most homogeneous output?
3
LED matrix dimming: How to control the current in a 12V LED lamp for video lighting?
5
How are multi LED flashlights wired to control current w/o resistors or regulator?
1
Low latency rf link
2
Driving a large array of LEDs (~600)
7
Why are 'modern' high-efficiency LEDs easier to damage than 'old' LEDs?
9
How can I use 5 LEDs for additive colour mixing using the CIE 1931 Chromaticity diagram?
1
Controlling the current through multiple LEDs linearily and efficiently
5
Measuring pulse durations with microsecond precision or better