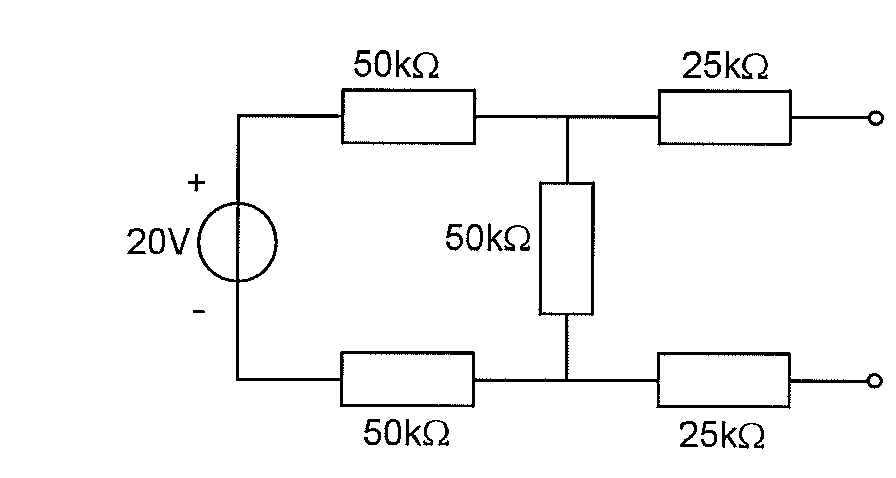 When you calculate the Thévenin or Norton equivalent, it is from the point of view of what it is connected to. In this case, the two terminals on the right of your circuit.

In other words, what could you replace the original circuit with, so that from the point of view of the two terminals on the right, nothing appears to have changed?

You already calculated \$V_{th}\$ properly, but you calculated \$R_{th}\$ from the point of view of the voltage source, instead of the two terminals.

Even more interesting is realizing why it is even possible to create something as simple as a Thévenin circuit to replace an arbitrary number of linear elements interconnected in an arbitrary manner.

The key to understand this is superposition, and I will prove it for the case of a network of resistors and voltage sources, but the same proof can be extended to include current sources, dependent sources, capacitors and inductors (with the help of Laplace), but the equations get longer and more difficult to follow.

If you had a voltage source \$V_{ext}\$ connected between the two terminals in question, and wished to calculate the current \$I_{ext}\$ coming out of it, you'd resort to Kirchoff's laws, so lets assume you used KCL and apply it to the N loops. You'll end up with N equations in the form of:

If all \$Vs_{j}\$ were zero (which is the same as shorting them), then all currents would be zero (naturally).

Now imagine only one \$Vs_{k}\$ is not zero. The equations now look like:

If instead you turned on another voltage source \$Vs_{m}\$, you would have:

Which is the same as the previous one but replacing k with m.

By inspecting this, you can realize that these are the equations that you would solve if you had turned on \$Vs_{k}\$ and \$Vs_{m}\$ simultaneously and wished to calculate the current \$I_{i,km}\$, so you can conclude that:

This is basically the superposition theorem!

Note that it automatically works for voltages as well, thanks to ohm's law.

Armed with this, you can now prove that the Thevenin equivalent works: \$I_{ext}\$ will be the sum of the contributions of each voltage source, which means that:

But one of those \$V_{s}\$ is \$V_{ext}\$, and the others can be considered contants, determined by the internals of the circuit so we can write:

Which we can re-arrange as:

And if we define:

Which basically represents the Thevenin equivalent.

Now that we know that the Thevenin equivalent is a result of superposition, and that it works, the question is how to determine \$V_{th}\$ and \$R_{th}\$, which is what you already were taught:

Here are a few hints:

Not the answer you're looking for? Browse other questions tagged resistors thevenin or ask your own question.