So I recently finished my boombox project, but ran into a minor problem. The boombox is powered by a blue wrapped lithium ion battery and using a ta 2021 chip amp from parts express. If I plug the aux cable into my phone BEFORE turning on the power, everything works perfect. If I turn on the power then plug in the aux cable to my phone, the speakers make a pop as it is being pressed into the phone and then the battery goes into protect mode.

My thought is that the pop is essentially a transient signal which exceeds the current limit of the battery and throws it into protect. My thought to fix this is to create a circuit that leaves the mute and ground on the amp connected until a signal is seen at the aux input and THEN unmute the amp. My problem is I'm not sure where to start to come up a circuit to do just that. Any help is appreciated. See the picture to hopefully make things as clear as possible.

Basically I need a way to trigger a switch to disconnect mute to ground using the iphone headphone jack output signal. 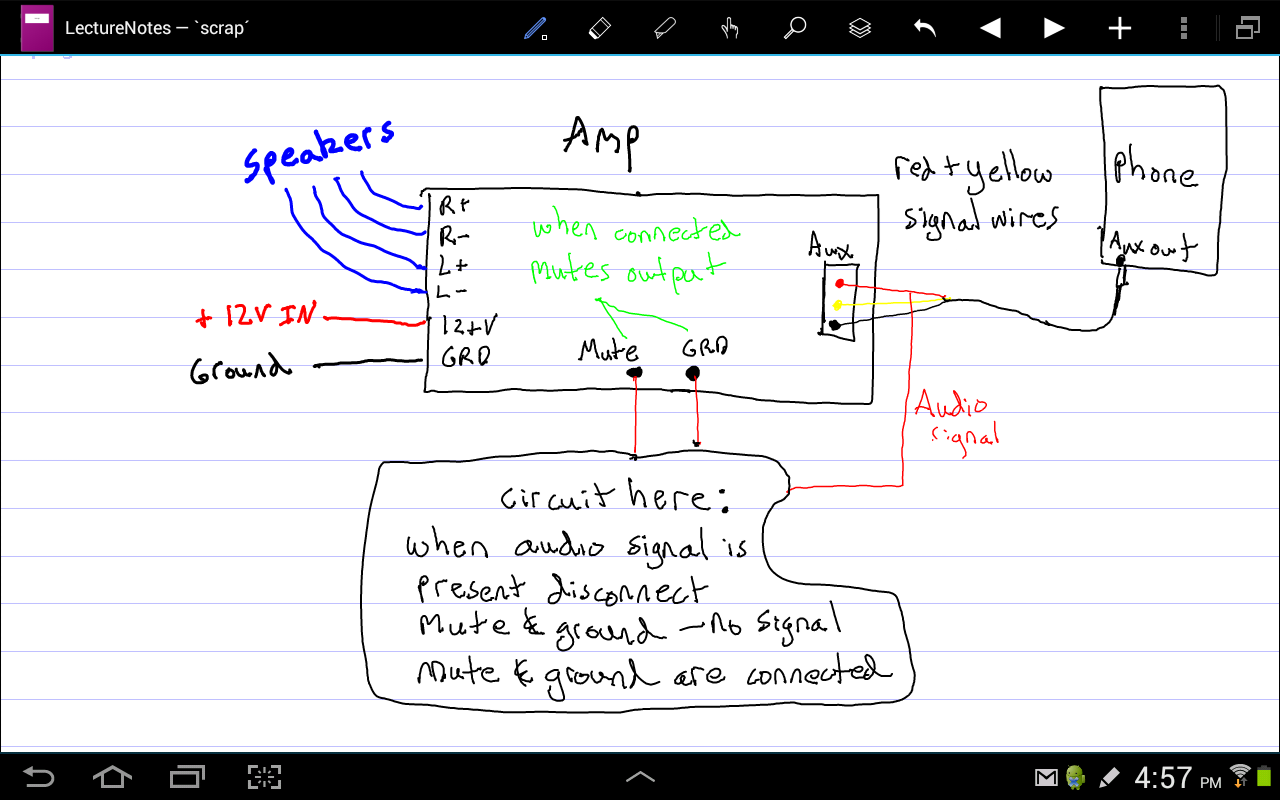 This sort of pop is a common problem with audio connections, particularly guitar leads as they can get swapped live. It's caused by capacitance in the systems being connected holding different dc levels, and results in a step pulse in the power output stage, which isn't good for your speakers and probably is what overloads your battery.

One means to neutralise is a reed switch in the jack, though I don't know of a mini stereo version.

The other means are to reduce capacitance in the cables and input stage of the amp. It may also be possible to use a transformer to isolate the input, or possibly a band pass filter to remove both the suddenness of the step change and the dc offset. But a filter may well have to be in the audio range to be effective, and that is the range you want to maintain.

If there was an automatic circuit which did this well then every electric guitarist would buy one, and there doesn't seem to be any out there (normally you have manual mute switches or the fore-mentioned silent jacks), so if you do get it to work there's quite a market.

An answer in another question pointed to this circuit as a possibility.

It's not clear what you want to achieve but perhaps this will help...

If you use a TRS jack to connect your cable from your phone to your "boombox", you should be able to get a TRS socket with a switch that is closed when the jack is inserted, use that switch to mute the amp.

Have you consider a voltage regulator with a current limit, if your main concern is the battery. I haven't used it, but the LT3055 looks like such a device. I'm not sure what the recovery procedure is for overcurrents, but at least you'll protect your battery. The LM317 can also be used as a current limiter.

Not the answer you're looking for? Browse other questions tagged switches trigger or ask your own question.

0
Shorting two pins using a headphone jack
2
Digital trigger from a weak signal
0
transistor toggles an LED, but not a solenoid valve
0
Relay or switch that can remotely power OFF and automatically power ON
1
Control two batteries with one switch?
0
Signal invertor for power switch using 3.5mm audio jack switch
1
Connecting a switch to a jack
1
BJT NPN Switch not fully turning off under certain conditions
0
Switch 12V with 3V control circuit