Can someone help me understand output impedance to an ADC?

I have an IR detection circuit that consists of a phototransistor and a resistor in a voltage divider configuration, like the right circuit here: 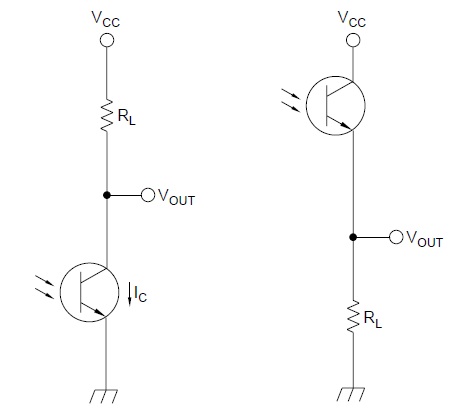 In my case, R_L = 1 MOhm since I want low current consumption. I connect V_out to an ADC pin of my ATtiny85 MCU. Now for my question: The ATtiny85 datasheet says that "The ADC is optimized for analog signals with an output impedance of approximately 10 kOhm or less."

The problem is that I don't understand what "output impedance" is when we're talking about an ADC. Does my circuit as above have an output impedance of 10 kOhm or less? And why is it called impedance, I thought that term is only used for AC signals? In my case I just want to read a voltage a few times per second at most to measure the strength of the incoming infrared light.

The circuit on the left in your question outputs its signal at the collector (it's called common emitter) and this will have an output impedance that is approximately the value of \$R_L\$ or 1M ohm. This is theoretically too high for your ADC and you will get errors and noise problems. It might work good enough for what you need perhaps - it's not a show-stopper in some applications: - 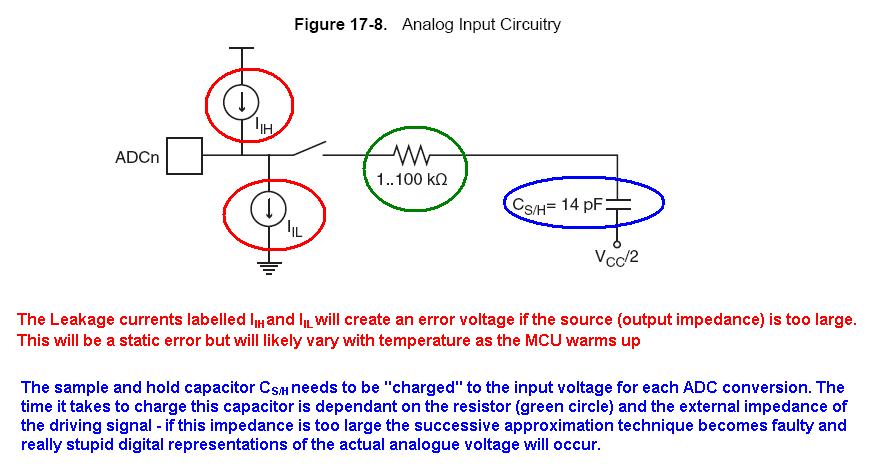 On the right, the circuit is called "common collector" and usually this can be regarded as having an output impedance of a few ohms so this circuit is more suitable for connecting to an ADC of the type you are proposing.

"Output impedance" is usually the same as output resistance for semiconductor amplifiers (unless you get up to RF). Think of it like this; for a small battery, it might have an output impedance of less than 1 ohm - the 1 ohm restricts the ability to supply an unlimited amount of current to a short circuit (simplistic explanation). Bigger batteries can supply much more current and have smaller output resistances.

You have probably heard of loudspeakers having an impedance i.e. 8 ohm or 16 ohm or 4 ohm - that is their "input" impedance and the power amp that drives one of these speakers must usually have an "output" impedance that is less than 1 ohm to maximize power to the speaker.

Andy's answer gives good information about how to design your circuit.

Let me try to address what you're misunderstanding about the ATtiny spec.

The ADC is optimized for analog signals with an output impedance of approximately 10 kOhm or less.

This doesn't say anything about the output impedance of the ADC.

It says that whatever circuit you use to provide an input to the ADC must have an output impedance below 10 kOhms.

Andy's answer gives a good overview of how that applies to your situation.

Not the answer you're looking for? Browse other questions tagged avr adc or ask your own question.

2
What analogue input voltages does this ADC understand?
4
Converting 0 to 24V analog signal to 0 to 5V for ADC input?
11
Required output impedance for ADC input?
0
Discrepancy on the ADC input impedance in the ATtiny datasheet 1..100k or 100M?
1
ADC Input Impedance
1
Characterization of an Amplification/ADC circuit
1
Measuring battery voltage and impedance
0
How to improve this circuit design to meet Arduino ADC input impedance requirement?
2
Unexpected ADC behaviour - can anyone help diagnose?