RF receiver to hear all carriers at once? (to hear electrosmog)

I would like to build "radio ears", a RF receiver that would allow me to experience the RF "smog" around us as sound in my headphones. A more sophisticated version of the cellphone-to-speakers interference we all know. I'd like to walk through buildings and streets and find out which places are "quiet" and which are "loud". Or to hear that a new WiFi transmitter has been installed upstairs. Also, to hear what sources have higher carrier frequency and which ones have lower. And hear the silence when there is a blackout. Some people call this "augmented reality".

A simple crystal radio without tuning would receive all carriers (rectification only), but I would like the circuit to somehow preserve information about the carrier frequency. For example, if it were the year 1910 and the air would be full of wireless telegraph transmissions, I would like to hear them beeping one over the other in my headphones, with the frequency of the acoustic sinewaves scaling with the frequency of the telegraph transmitter's RF carrier (e.g., 1 MHz transmitter -> 1 kHz in headphones, 1.5 MHz -> 1.5 kHz).

Technically, I want to scale the frequencies, not shift them, and that is where the problem lies!

Is such a circuit possible at all? Mathematically, I want to squeeze a 1000 times larger bandwidth into a smaller one, so there has to happen some information loss. However, I was not able to come up with a reasonable mathematical description of what kind of loss this should be (its none of the simple things like low-pass, band-pass, frequency shift etc.).

Right now, I'm not looking for performance, but rather for the principle. The question is: what kind of simple analog circuit would turn 1 MHz into 1 kHz and 1.5 MHz into 1.5 kHz?

edit: if you suggest a digital algorithm or a mathematical formulation, I'd like to stress that I need it to be (almost) real-time. To produce 1 s of output from each 1 s of input. In other words, to be able to listen to several 1910's telegraphers transmitting Morse code at the same time (and write it down with my eight hands :) )

If you have a signal: $$x(at)$$ the fourier transform will be: $$F[x(at)]=\dfrac{1}{\lvert{a}\rvert} X(\dfrac{f}{a}) $$ this is known as the scaling property of Fourier transforms. Which also relates the inverse relationship between the time domain and the frequency domain.

So if you sample the broadcast signal at very high frequencies and then play it back (or down sample via decimation) the entire bandwidth will be compressed/scaled.

the challenge here will be to have enough Bandwidth on the front end, a high enough sampling rate and sufficient gain (that pesky \$ \dfrac{1}{a}\$ factor). However, it need not be digital, just sampled.

Another approach; very simple but imperfect, would be to sample the spectrum with a fast ADC at, say, 100MHz; collect (say) 1 ms of data, and replay it at 100kHz (when it will last 1 second).

The tricky bit is to decide what to do at the start/end of this sampled block; if you sample 1ms every 0.5s you would always have 2 seconds worth of audio on the go simultaneously; smoothly fade the older one down as you fade the newer one up.

This could be an interesting experiment as well as a bizarre form of electronic music; John Cage would probably approve!

Simplest method would be to yank traces off of a spectrum analyzer and then run an inverse FFT on them at audio frequencies and play them out the speaker. It shouldn't be too complicated to implement something along these lines with a software defined radio solution (rtlsdr, gnu radio, etc.).

The question is: what kind of simple analog circuit would turn 1 MHz into 1 kHz and 1.5 MHz into 1.5 kHz?

There's a digital counter (like a d type flip flop) that can divide frequencies in the same proportion and therefore cram a lot of bandwidth up: - 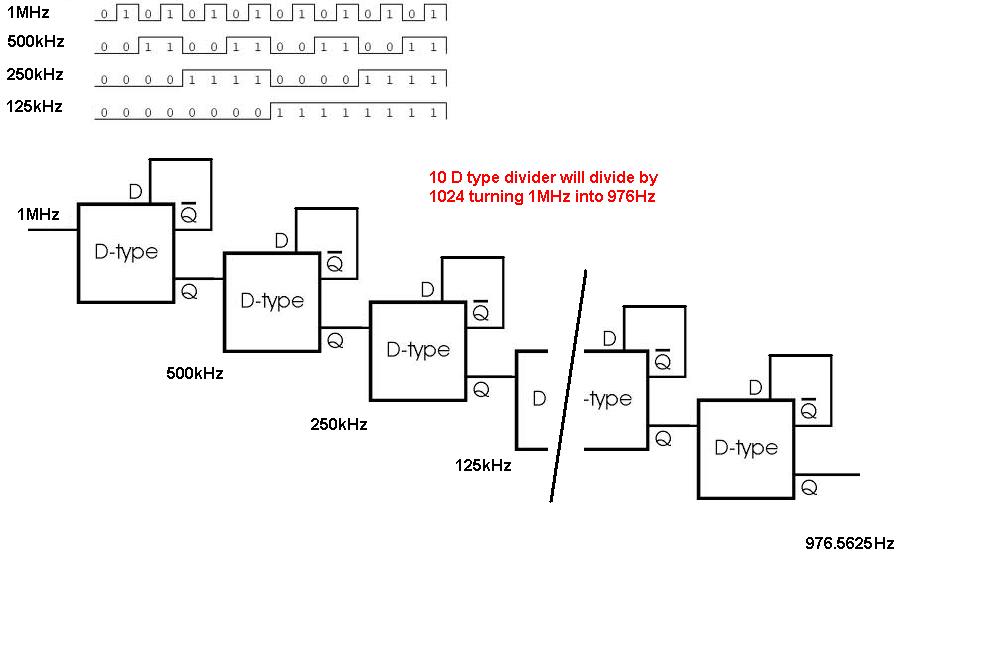 The trouble is is that there will be numerous carrier frequencies (such as 1MHz) picked up by your receiver (simultaneously) and what you will hear (after dividing down) will be a mess I should imagine. Anyway this is the simple method and there are more complex ways but I don't know if these will produce anything any more recognizable when played through a speaker.

Analog? None. To compress frequency scale, only "analog" solution is to expand time. The unit of frequency is Hz, which is 1/s unit.

Another problem is the amount of this "smog". We are talking about packing tons of information to 1:1000 space, which will overflow comprehension. This example of 1910 multiple Morse code channels could be converted through Fourier transforms, if we assume the information is just the carrier on/off. But what about an AM station with sidebands containing speak or music? Downscaling the modulated information would drop below hearing frequencies, in practice disappear. FM is even worse, the info content of the sidebands goes unintelligent with frequency domain compression. Digital modes, such as about all the traffic at 2.4 GHz would be just hissing noise.

I'd suggest synthesizing something more intelligible, more descriptive, from a mixture of spectrum analyzer output and "civilized guess" about the content of these signals found by spectrum analyzer.

Noticing there's a new WiFi gadget next door/upstairs may be beyond human separation capabilities amongst the smog. I would compare it to field of grasshoppers, with the difference, that once they start chirping, they do not rest. You'd only notice the newcomer if you were listening at the very moment it started chirping. I would consider a completely synthetic wall-of-music to describe the WiFi/BT environment.

3
arduino rf communication: beginner
3
Determining type of modulation
5
Why does this regenerative receiver not just turn into an oscillator?
0
High Frequency Oscillator
1
Could a vintage 9 transistor AM/FM implement a phase-locked loop of some form?
1
Question related to the interference seen at the spectrum analyzer's receiver
0
Why do carrier waves sound silent on radios?
0
Is this radio receiver/transmitter plausible?