I've created the following circuit for educational purposes. It's basically 2 LEDs in parallel. I've used my multimeter to measure the current and voltage of the various components and noted everything down. The idea was to come up with the formula to calculate the current flowing through the 2 LEDs. I know that the total current will be divided between the 2 LEDs but I'm having trouble calculating everything. 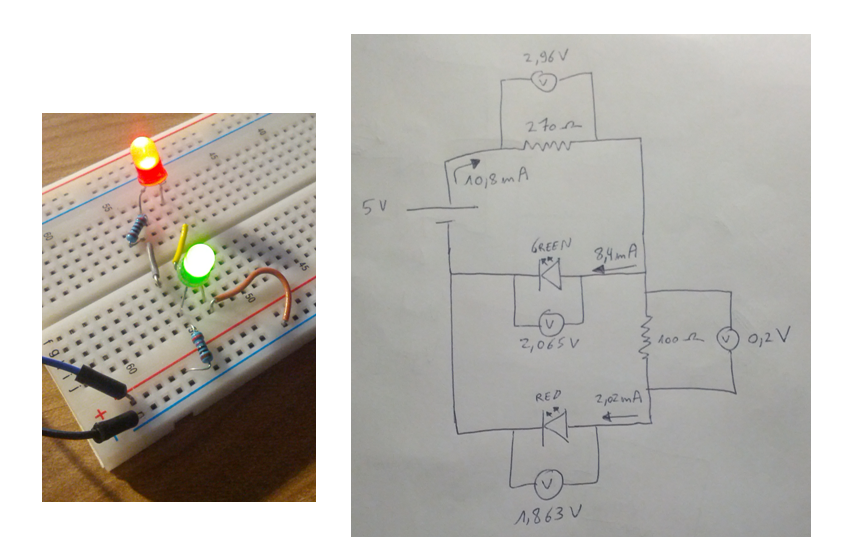 I'm able to use Ohms law for a simple 1 resistor/LED circuit but I'm having trouble understanding how to calculate the current flowing through the 2 LEDs in this circuit. Here's what I did :

Current for the green LED :

Here I attempted to use the basic formula to calculate the current through the green LED, but that obviously doesn't take into account that there is a another LED in parallel.

So this is obviously wrong. I don't know what I calculated here. I guess this would have been valid if only the green LED was present, and the voltage drop would have been 2,065V.

Current for the red LED :

Here I tried to visualize the current flow, so I asssumed that the current flowing through the red LED would have to pass the 2 resistors in series (270 + 100) and used Ohms law again

This is again incorrect but seems to correspond to the current flowing through the green LED. Don't know if this is coincidence.

I've chosen the resistor values randomly just to ensure that the 2 LEDs would be lit. This circuit is just for educational purposes.

The logic behind calculating the current is something I'm currently missing. Any help would be great.

The big problem is that you didn't draw the schematic properly. A good schematic always makes the things clear: 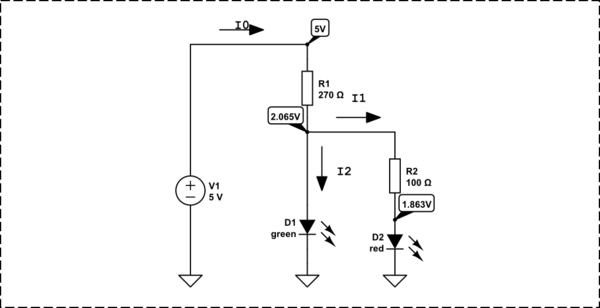 The improper characterization of parallel and series connected circuit elements needs to be addressed particularly if this is an educational circuit.

It's basically 2 LEDs in parallel

The two LEDs are not in parallel. If the two LEDs were parallel connected, the LEDs would have identical voltages across. What you have is a green LED in parallel with a series connected resistor and red LED

This is explicitly expressed by the KVL equation around that loop:

The two resistors are not in series. For two series connected resistors, all of the current exiting one resistor enters the other. In your circuit, the current through the 270 Ohm resistor splits between the green LED and the 100 Ohm resistor.

This is explicitly expressed by the KCL equation at that node:

Not the answer you're looking for? Browse other questions tagged led voltage current or ask your own question.

13
How does the current limiting resistor for an LED affect current and voltage drops?
2
2 LED Parallel circuit help?
3
Semaphore using one microcontroller pin
0
Calculating LED current using ohms law
0
With LED brightness and different resistors, do I talk about the current or the voltage?
8
Why is my circuit's current far lower than expected with 2.6v / 220Ohm / and LED?
1
Current reading in a simple LED circuit
0
Circuit analysis with an LED and a voltage divider
1
Explain how Ohm's law applies in this tiny circuit