Would shooting laser or UV light at an inverter make it permanently slower?

I'm studying the topic of cloning electronic circuits for my research. And I have a scenario as the following:

One way I can think of is to shoot laser or UV light at the inverters of RO2b for a long time (of course, not too long because it will burn the inverters so bad that they will become nonfunctional). My reason for this approach is that laser can induce extreme heat. And if we subject the inverters to high temperature for a long period of time, it will age the transistors much quicker (I believe this is called aging effect in electronic circuits). As the inverters age, they will become slower. However, I am not an expert in semiconductor physics to really say with certainty that this approach will actually work. Can someone (who has studied a great deal of semiconductor physics) confirm to me that this approach will work or won't work? Can you also give me some references to justify your answer?

It sounds like you want to use something similar, yet inferior, to laser trimming. Aging is a non-linear process and depends on your substrate and doping. Not only that, but typical accelerated aging processes (by heating) can take days. For instance, the graph below from this paper 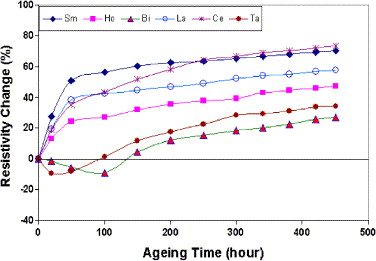 It's hard to find much information about this, likely because it's not a very great idea.

Not the answer you're looking for? Browse other questions tagged transistors inverter delay asic semiconductors or ask your own question.

1
How to make transistor fail protection for light bulb
2
Would splicing existing wires (from charge controller to battery) to connect an inverter work, and is it safe?
1
How to Make two different frequency outptups with Arduino for SMPS inverter?
0
Why does my 3 V EL inverter make sound?
2
How does transistor bandwidth affect stability?