Driving a LED from a wide ranging input voltage

I have been working on a small linear power supply, capable of regulated output between 2V to 30V, using the LM338 IC. For the most part it is a simple implementation taken straight from the datasheet.

Apparently the 7805 5V regulator can tolerate up to 35V input, which would provide a 'known' voltage to drive an LED from. However this seems a little overkill/expensive and would probably have heat issues. I don't think I can use a large resistor either as at lower voltages the LED would not illuminate or be very dim? I did wonder about a constant current LED driver but could not find a suitable part.

I would appreciate some design suggestions on how to include a 'power on' LED in my design bearing in mind the wide input voltage range. Thanks

Clarification Edit: My power supply board has a three way header and 2-pin jumper to change the operating mode from either (A) fixed voltage or (B) adjustable voltage. For the fixed voltages, such as 3.33V, 5V, 12V, a piano DIP switch is used in conjunction with various 0.1% or 1% resistors. For the adjustable voltage operation, the jumper connects the LM338 ADJ pin through a 5K linear potentiometer.

Assumption: The requirement is for a "regulated power available" indicator, rather than merely a "mains supply on", since the latter would not be affected by the variable voltage of the power supply as mentioned.

LEDs are essentially current-driven devices, not voltage driven. As long as the supply voltage is at least as much as the rated forward voltage of the LED (plus any headroom for current regulation circuitry), and the current through the LED is regulated to a desired value, the LED will be lit at a constant intensity. Typical indicator LEDs commonly are designed for 20 mA current, but will work excellently at 10 mA.

The easiest way of obtaining a constant illumination from an LED across a wide range of supply voltages, is to use a constant current driver circuit.

This can be made using, for example, an LM317 as a constant current source:

Alternatively, use a constant current 2-terminal device such as the SuperTex CL220 or CL2, simply wired in series with the LED. In other words, it is as simple as using a current limiting resistor with the LED, just with one of these parts instead of the resistor.

Given that the LM338 requires a minimum load current of about 5 or 10mA to work correctly, why not use this for the LED. Adding a PNP transistor as shown below should be OK I reckon: - 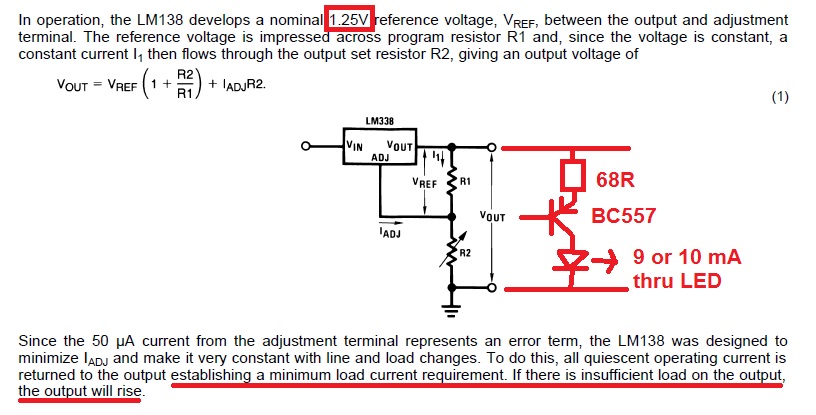 If the beta of the the PNP transistor is 400 or greater (BC557C) and R1 is in the order of 1k ohm, the introduction of the PNP will give rise a small offset error in the output voltage. In effect \$\frac{10mA}{400} mA = 25\mu A\$ will modify the effective R1 current from 1.25mA to 1.275mA incurring a static shift in voltage output of 2%. As this application is for a variable/adjustable power supply I don't see this as a problem.