It has occurred to me that almost no battery charger would be required if the battery pack was of the same voltage as grid supplied power.

I build electric bikes, and the voltage on these has been ever increasing for obvious reasons (smaller diameter cables and connectors vs high current, over volting motors for additional speed, lower current mosfets required in the speed controls Etc.).

Now I was pondering, if we were to increase the battery pack up to, say, 32 LifePo4 cells (3.6 volts constant voltage charging) couldn't I just rectify the 117 volt grid power and charge directly from that? I know voltage will shift with the rectification, but I don't know the specifics. In either event the number of cells charging could be adjusted to the closest match of what was coming out of the wall. Yes the final constant current phase of charging would be skipped, but this is a negligible amount of power anyway. Am I missing something? Is there a reason this won't work? 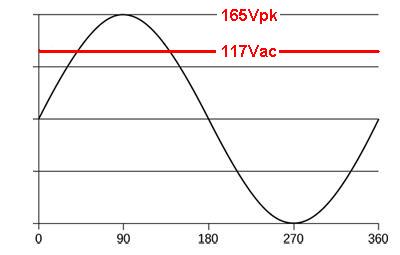 How does this allow you to charge a battery of 117V even if you rectified it - you'd still get peaks of about 164V falling to zero then back up to 164V.

Now apply that AC voltage to the battery pack when it is fully discharged to 92V (2V per cell) and the only time a charge current will flow is when the AC line voltage exceeds the battery pack voltage.

In this graph, V(n001) is the AC voltage. V(n002) is the voltage on the battery's positive terminal. I(V2) is the current into the battery, assuming a 10\$\Omega\$ internal resistance, which is a value I randomly selected.

This has 2 potential problems:

Controlling the current through the batteries and limiting the power factor distortion can both be solved with, for example, a Buck-boost Converter 4 using a current controlled feedback loop or another switched converter topology and specifically designed charge controller IC.

At this point, the charger is just as complex as the original system that had a lower battery voltage. It may be that requiring a smaller voltage step down could improve system efficiency, but I believe this would depend on the overall design and component selection.

Another interesting thing to point out here, is that the current would be delivered in pulses. I have seen some comments that pulsed current charging is safe for LiFePO4 batteries, but I haven't conducted or read any research regarding this, and would recommend further investigation.

Schematic and graph were generated by LTSpice. 6

To answer your last, and most important, question: the voltage across each cell needs to be kept within the correct range. The batteries will not be physically identical, and so different voltages will appear across each battery in the series chain. With lithium batteries, this will likely result in fire and/or explosions.

Proper battery chargers have means of balancing the voltage across the cells.

Not the answer you're looking for? Browse other questions tagged power-supply power batteries charger lifepo4 or ask your own question.

5
Charging lithium batteries with solar panels
11
Using LiFePO4 battery as car battery
2
Charging 10 AA nimh batteries in series
3
Battery charging for DIY laptop
5
What are the problems with LiFePo4 float charging? How should I charge them?
0
Determining Faulty Lithium Batteries in Battery Pack
0
Why is my self built LiFePO4 battery pack not charging?