How does this MOSFET circuit work?

The following circuit from a textbook models an inverter implemented by a MOSFET switch. I understand how in the first case Vout is zero, but in the second case(the switch is open), the textbook states that RL is a pullup resistor when it seems to me that the resistor actually decreases the voltage between Vout and ground. The textbook further states that RL provides a logical 1 output when the MOSFET is off but I can't understand how since Vout is not parallel to RL. Am I missing something? 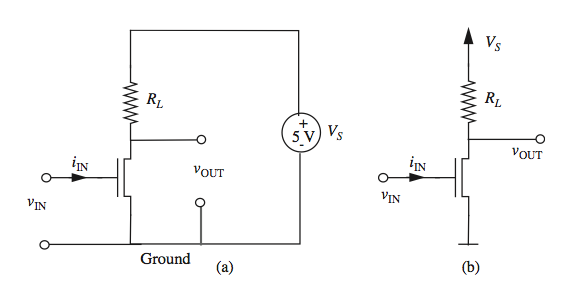 You're missing the resistance connected to vOUT. Yes, this resistance will create a voltage divider with RL, resulting in a voltage smaller than VS.

However, if the resistance is very high, such as that of a CMOS input, the resultant voltage will be close to 5V.

In the second case ask yourself what level will the output come to if you removed the transistor from the circuit. the answer is: that the \$R_L\$ will pull the output to the upper rail. In this case the output resistance of the circuit is simply \$R_L\$ and for the most part in CMOS logic the loads are capacitive (i.e. the gates of subsequent transistors) so you will see a RC charge curve.

In the first case I think you've understood that the transistor is basically shorting the output to ground.

I believe I was confused because the author failed to mention two components from the circuit examples: The input impedance at the input pin Vout, and the fact that the MOSFET element acts as a resistor in the OFF state. 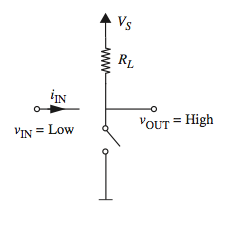 In the first case(diagram above), the pull-up resistor has a much less resistance than the input impedance and the voltage drop across it is minimal compared to the impedance connected to Vout. This allows the difference between Vs and Vout to be minimal and maintaining Vout near Vs. 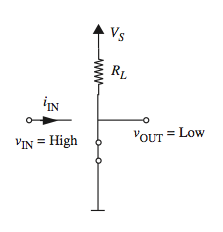 Not the answer you're looking for? Browse other questions tagged mosfet switches inverter pullup or ask your own question.

40
Switching DC with MOSFET: p-Channel or n-Channel; Low Side Load or High Side Load?
4
Why is this MOSFET's “pullup” resistor necessary?
0
How is an active output clamp implemented on a high-side MOSFET switch?
0
Pull up/ Pull down resistor
1
Simple voltage inverter with mosfet/bjt
0
MOSFET pwm circuit question
0
How Does A Pull Up Resistor In Parallel Work?
6
Pull up resistor on P-MOSFET gate. Not working
0
PS_ON to GND with MOSFET to turn on ATX PSU
2
Purpose of MOSFET in this circuit