How do I protect against an automotive load dump?

A load dump occurs when the load to which a generator is delivering current is abruptly disconnected. In automotive electronics, this applies to disconnecting a battery while it is being charged by the alternator. It is apparently well-described in this $65 SAE document; Wikipedia claims it can be "as high as 120 V and may take up to 400 ms to decay". This document claims a 12V system dump can be as high as 87V and 400ms long:

Now, I want to clamp much lower than 45V (say 20V), and would like to recalculate these values. The author writes:

This reveals the formula:

... And updates the table as follows:

This gives a maximum value of 781J. Did I do this correctly? My TVS system must absorb up to ~800J, passing nearly 30A? It seems like a heck of a lot, though it will be for up to 6 parallel semi truck batteries (~100AH each) in addition to its 130A+ alternator. (Could the source resistance be even lower than 0.5Ω?) What combination of TVS elements can effectively pass 800J without violating its clamping voltage by much, and what makes it more effective than other solutions?

I am protecting low-voltage digital and analog circuitry, which also have their own power filtering.

The two broad methods to survive are either

Which is usually preferable and cheaper. Load dumps are in a class of faults that many devices are not expected to operate during (unlike coupled inductive transients), so unless you're some critical device (ABS, ECU), you're allowed to shut down and reset when you see a load dump.

Very broadly speaking, to do this you could have a Zener diode on your input, where once it breaks down and starts conducting, switches some pass transistor to disconnect yourself entirely. Obviously your pass transistor will have some voltage rating, so selecting a TVS is still needed (see following), but it won't have to clamp anywhere near as much voltage, energy, and power.

This is also quite possible with TVS as you mention, and then it really depends on how hard you want to clamp it. If you're fine with 75 V coming through, I think I've seen 500 W SMC's used. If you want it like almost nothing ever happened, you can do as I've seen and use (2) 5 kW 5KP22CA TVS in parallel. They alone can clamp the entire load dump themselves; I've tested a pair that survived (5) 100 V dumps in a row, about 10 seconds apart between each.

The math behind it is somewhat hazy to me, as the figures provided on the datasheets don't seem as though they were meant for transients any slower than 60 Hz. The 5 KW rating is for a 1 ms pulse, which is obviously just 5 J. 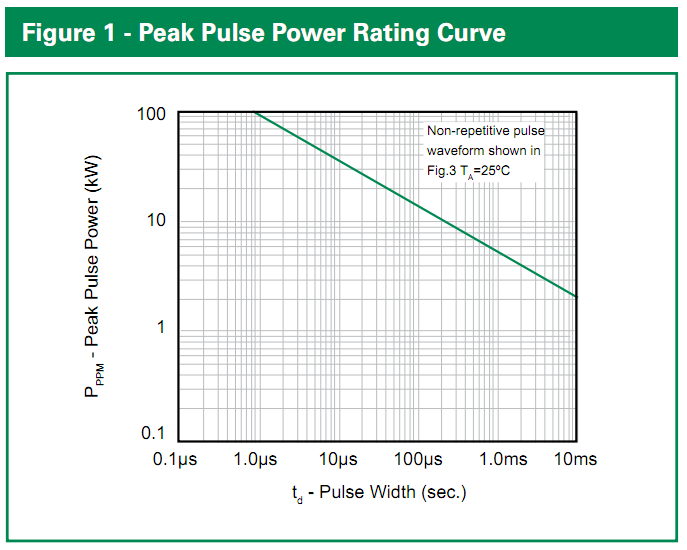 If you wanted something better, I'd come up with an equation for the curve and give it an asymptote at the maximum steady-state dissipation (8 W...though that might not make a difference), then do some integration with that over your pulse to see how much of the rating you use up :P

Here is how you can protect against an automotive load dump

The LT®4356 surge stopper protects loads from high voltage transients. It regulates the output during an overvoltage event, such as load dump in automobiles, by controlling the gate of an external N-channel MOSFET. The output is limited to a safe value thereby allowing the loads to continue functioning. The LT4356 also monitors the voltage drop between the VCC and SNS pins to protect against overcurrent faults. An internal amplifier limits the current sense voltage to 50mV. In either fault condition, a timer is started inversely proportional to MOSFET stress. If the timer expires, the FLT pin pulls low to warn of an impending power down. If the condition persists, the MOSFET is turned off. After a cool down period, the GATE pin pulls up turning on the MOSFET again.

Not the answer you're looking for? Browse other questions tagged protection automotive tvs or ask your own question.

15
What happens after a zener diode breaks down?
7
Sizing an RC snubber
9
In terms of protection, how does this automotive power supply circuit look?
2
Reverse Polarity & Load Dump Protection (TVS)
2
High power / high current clamping circuit
0
12v circuit that turns off after 30 seconds
0
Keep a 12V led strip on for a few seconds
1
Automotive Load-dumps, ISO standards & Meaning behind datasheet