I have a 6v DC motor that controls a physical system similar to a window blind, using one SPDT toggle switch and two SPDT microswitches for control. I have seen similar setups with hoists, however I do not know if the toggle switch was SPDT or DPDT.

Using just those three SPDT switches, is it possible to achieve the above result? I can't work out how to formulate this mathematically. Without maths, the best I have come up with needs a DPDT toggle switch, as follows:

The next idea for a solution would be to use an H-bridge BJT circuit, perhaps with some logic or a low-end 12-series PIC microcontroller.

Any solutions would be helpful. (As a bonus, I'd be very interested in the maths which confirms if a solution with just three SPDT switches would be possible, and what the circuit would be)

The circuit that you are using with only the buttons is perfect. My recomendation is the next:

If the simplest works, use it and don't make your life complicated.

You can do this if you add a couple of transistors. You mention a 6V supply voltage but don't mention current. I'm also going to assume that you planned to use a center-off switch so that you can stop the motor before it has reached an end limit switch. 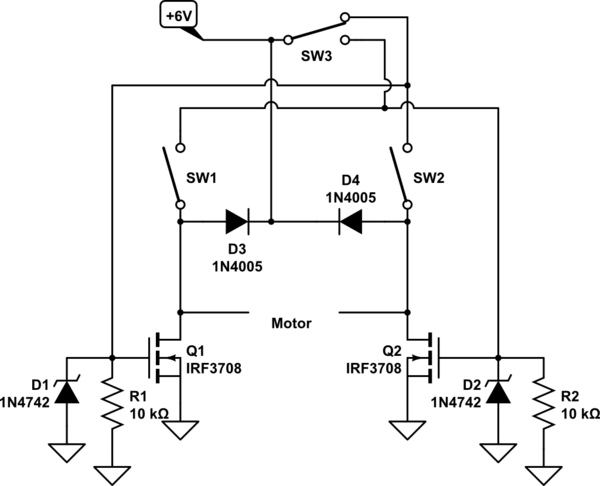 SW1 + SW2 are your normally-closed limit switches: open when limit is reached.

The IRF3708 is a nice MOSFET with low RDSon and is inexpensive. Other part numbers will work just fine so long as they are fully enhanced at your chosen supply voltage.

D1 & D2 are 12V zener clamps that protect the gates of the FETs from transients. Don't leave them out.

i think this would be simpler.

Not the answer you're looking for? Browse other questions tagged digital-logic switches dc-motor polarity or ask your own question.

1
Is it possible to change direction of DC motor using a 3-state rocker switch?