Current-sense for NES/SNES gamepad detection - getting a voltage spike

I'm in the process of designing a wireless controller receiver for the NES/SNES game consoles. My wireless receiver consists of a bluetooth module and an AVR microcontroller, with the microcontroller connected to the controller's control lines. It's designed to be installed inside the console itself, but I don't want to break support for normal controllers, so I need some way of detecting when a controller is plugged in.

The controllers themselves aren't designed with this in mind, so I've been looking into a couple of options. The NES/SNES controllers are basically nothing more than a parallel-to-serial shift register (the NES controller just uses an off-the-shelf CD4021, the SNES has a custom chip that is basically just a 12-bit version of the same thing) with pull-up resistors and membrane switches to ground on each of the parallel inputs, and the latch, clock, and data (bit 8) signals connected to the cable between the console and the controller.

My next option is a high-side current sense circuit, using the controller as the load. With the controller disconnected, no current flows through the sense resistor, so no voltage is dropped across it. When the controller is connected, current flows, voltage drops, current sense amp outputs a voltage. This is working fine with one exception. When I first apply voltage to the circuit, or when I connect the controller, there's a momentary voltage spike on the monitor's output line that hits roughly double the supply voltage, so that's no good. I'm not even sure how exactly that's possible, since the spike goes above the supply rail, but it's pretty clear on the multimeter.

Analog really isn't my thing so I have a feeling I'm doing something wrong. I've attached my current schematic, can anybody suggest a good way of suppressing this voltage spike? I'm not sure if a zener diode would be fast enough to handle it, and adding an RC low-pass filter onto the output doesn't help either, and just ends up lowering the output voltage. I need something, I'm pretty sure 10V will blow the ADC pin on the microcontroller. Any thoughts?

Looking at the schematic, I realize I forgot to add decoupling caps on the INA282 supply line as per the datasheet. I have them in the circuit, but I still get the spike. 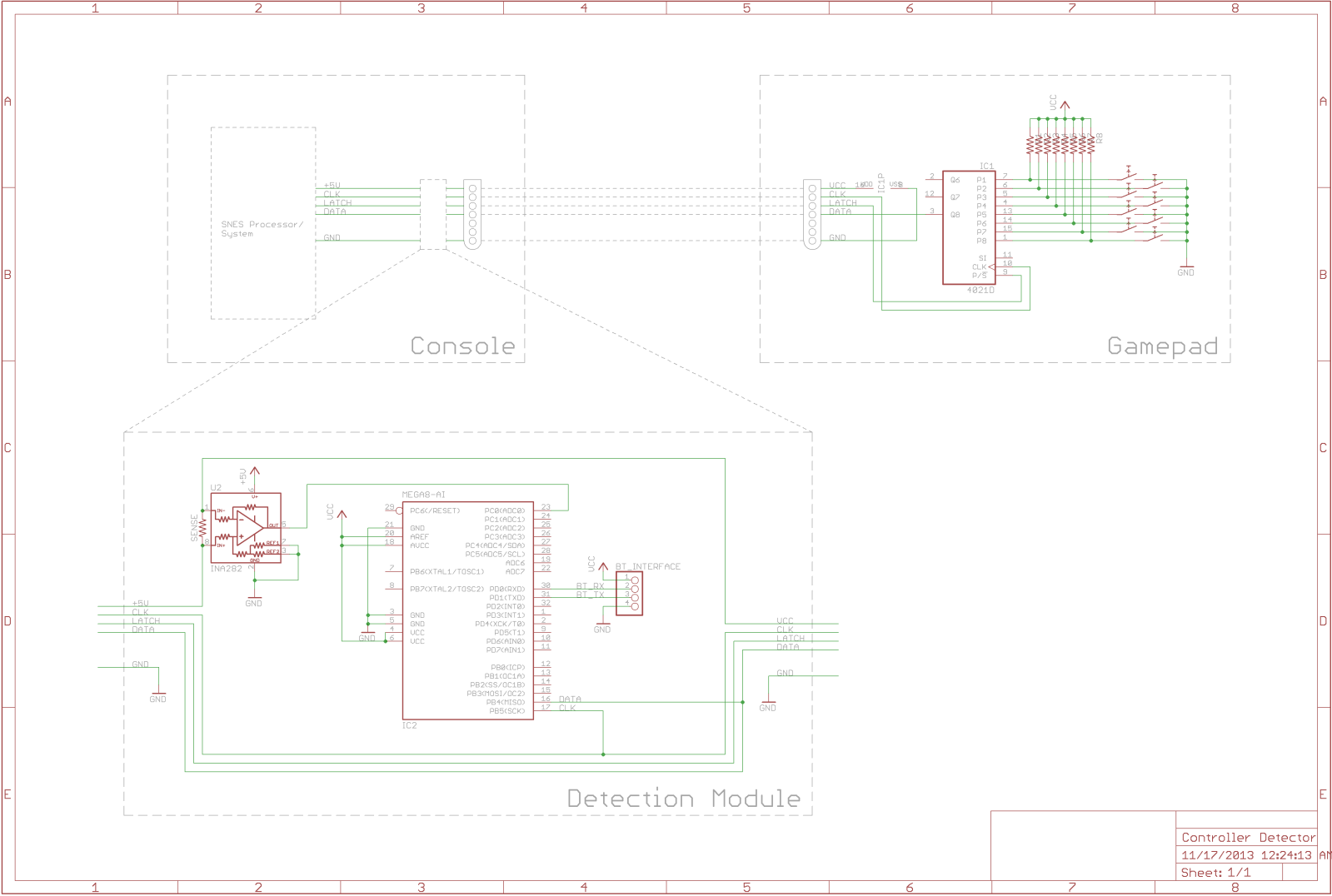 It seems a lot of trouble to go to when quite possibly a single resistor might work. The data output from the CD4012D shift register in the game pad will offer an impedance to the data line when it gets plugged in.

Not the answer you're looking for? Browse other questions tagged analog transient-suppression or ask your own question.

4
Creating a “Sharp” Turn on for LEDs
2
How do I quantitatively describe a system with 2 parallel diodes and a current source
2
Analysing a Geophone Circuit
6
How should I use rotary switches and resistor networks to uniquely relate each possible combination of switch settings to an analog voltage?
4
Understanding source and return current flow on PCBs
0
Auto switching from bluetooth to aux
0
Voltage Detection via Analog Comparator
0
Resources on Noise Circuits
2
Current Sensing Amplifier Circuit explained