The PIR sensor was bought from Cool Components. The alarm pin is an open collector and I am therefore using a pull up resistor (10k). There is a fritzing breadboard diagram below. The wire colours from the PIR are not the same however. Looking down at the circuit side of the PIR sensor with the wires at the bottom they are: red - brown - black (There is a link to an image of it on the Pirate Pad link below). So, here is the first point of confusion:

1) The datasheet for this component (check PiratePad) as supplied on the product page implies that the power should be the black wire and the alarm should be red. I've tried the circuit both ways and am getting anomalous results with both.

The second point of confusion is:

2) ...that depending on which way round I wire the power & alarm I am getting either no changes at all to the values from the alarm pin or seemingly random fluctuations between high and low. 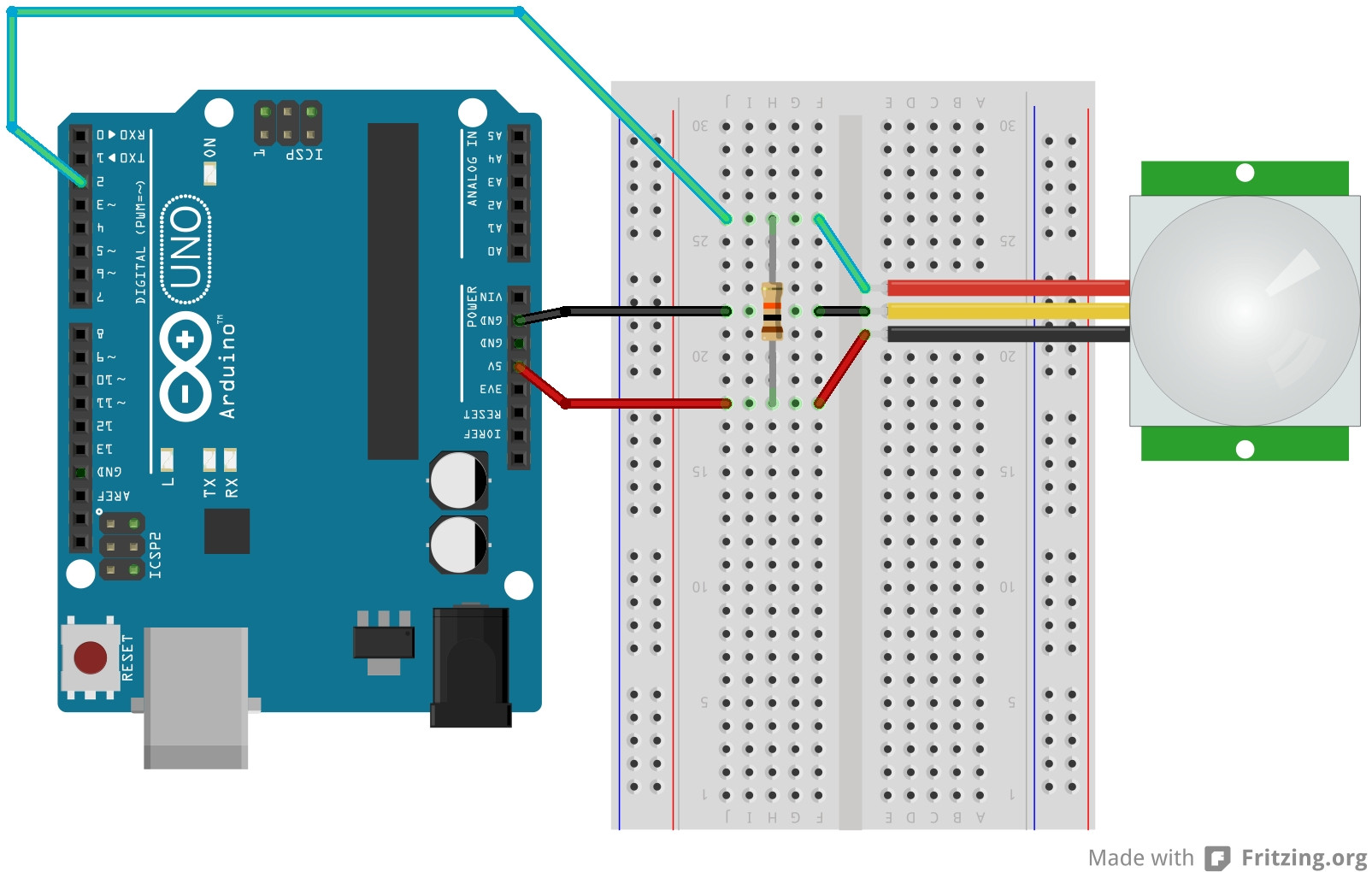 [RM]: As built: Note that connector housing appears to have retention latch slots on opposite side to website photos. If so the as-built diagram is as per mechanical pictures and the opposite of the word instructions. 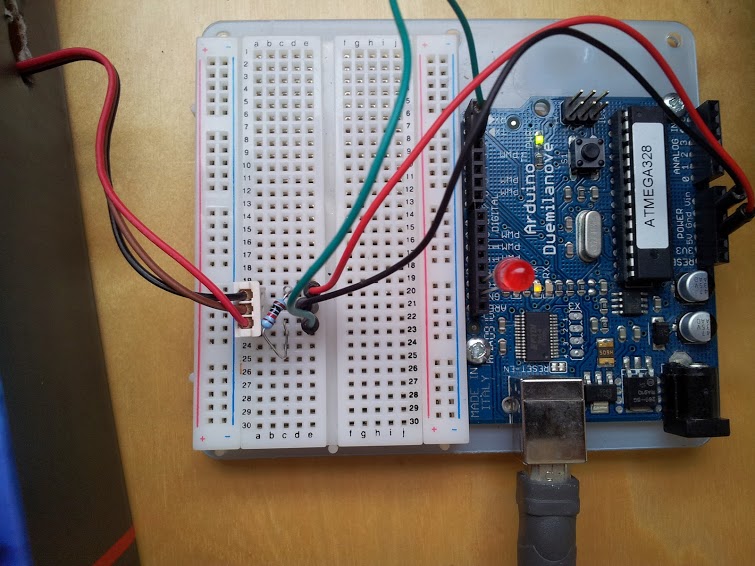 And this is a few sources of information that I've found and followed to no avail: http://piratepad.net/sbIgN9KIeB

Any advice would be gratefully received.

These devices require (typically) 10-24v to operate reliably due to the onboard regulator. With a supply as low as 5v all sorts of stability issues will occur.

Try powering the PIR with 12v connected as its supply. Retain the 10k resistor though as this is performing the open collector level conversion and giving an output that will swing from 0-5v. Interestingly, if this were connected to the Arduino 3.3v terminal then the ouput level will swing from 0v to 3.3v and this is the beauty of of using open collector devices. They can allow compatibility between circuits of different logic and supply levels.

Have a look at this useful resource for the explanation of "open collector" devices.

It is clearly answered on the page you linked to for the PIR sensor. Quoting directly from the second paragraph:

There APPEARS to be some inconsistency between housingf pinout and stated colours.

Tracing where the wires go should be easy enough.
Connection MAY be to 3 points shown or may not.

Supplied photos is 'a bit small' but may connect as shown below.

IF that is an LM324 or equivalent then power + should go to regul;ator (pin 4) and power - to ground or similar.

If the IC marked as a ?regulator? is one the rest follows.

Device shown as ?Qout? appears to be a transistor BUT seems to have a ? in the O/C lead to alarm out. Photo too poor to tell with certainty. 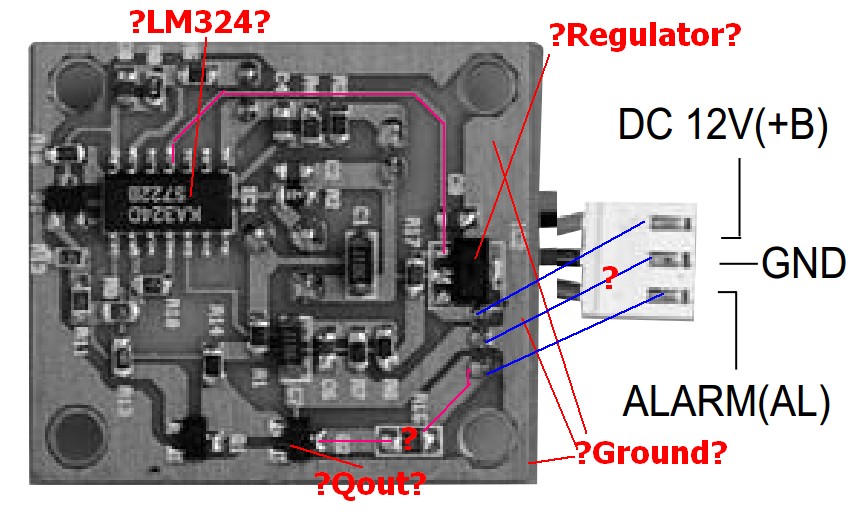 As a deleted answer noted, PIRs work by changes in level between zones - usually from something crossing an interzone boundary. A simple 2 or few zone detector may need substantial movement to trigger.

Not the least problem is that there are multiple similar models of PIR board commonly available, it seems, with little care for consistent wiring or conventional use of wire colors. There are at least two models with four mounting holes, and one model with two mounting holes.

As an example, here's a page that shows two different models, apparently is unaware they are different, and discusses wire functions by color, and shows some photos. Might be helpful or might not. http://itp.nyu.edu/physcomp/sensors/Reports/PIRMotionSensor

I suggest searching google images for "PIR sensor", which turns up hundreds of images of the product, and of wiring diagrams, and photos of built projects. Try to find your exact unit in some photos, and inspect the wiring used.

Not the answer you're looking for? Browse other questions tagged arduino infrared or ask your own question.

9
Moving PIR sensor (or IR camera), aka Predator like alien scanner
6
Reducing the sensitivity of a PIR sensor?
4
How to have an Arduino wait until it receives data over serial?
16
Can I electronically trigger a PIR motion sensor?
0
problem of transmitting data from serial device to bluetooth on Arduino
1
Arduino PIR relay with manual override switch
1
PSOC 5 interfacing with PIR sensor
1
pir motion sensor sensor - working principle
0
Multiple Vibration sensors via single optocoupler
0
How to manipulate a PIR sensor?