I'm trying to figure out the reason why in the following circuit, at steady state, the current ix is zero. My best guess is that because there is a parallel branch which by KCL should equal 100ix and would be zero because of the open circuit provided by the capacitor.

However, this seems counter intuitive because wouldn't the electricity want to go around the outer loop. And in this case, how do you deal with a loop that has a dependent current source dependent on its own current? Is that even possible? 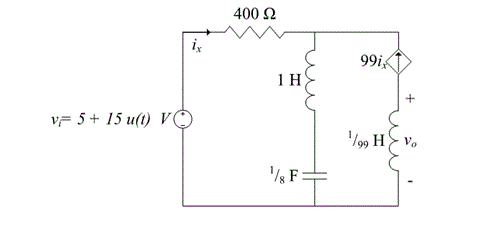 Despite the comments to the contrary, this circuit does have a steady state solution since the voltage source produces 20V for \$t \ge 0\$.

My best guess is that because there is a parallel branch which by KCL should equal 100ix and would be zero because of the open circuit provided by the capacitor.

That's correct. The steady state KCL at the node in question is:

However, this seems counter intuitive because wouldn't the electricity want to go around the outer loop.

It may seem counter intuitive but that's because your intuition hasn't fully developed yet. Once you come to fully understand the implication of that current source, the result will seem obvious.

And in this case, how do you deal with a loop that has a dependent current source dependent on its own current? Is that even possible?

But this isn't the case here*. There are two meshes (loops), one with current \$i_x\$ and the other with current \$99i_x\$. So the controlling variable of the dependent current source is not "its own current".

But, if it were the case, then the only way for the source to produce a non-zero current is for the current gain to be precisely 1:

Since any value of \$i_x\$ satisfies the equation, the current is indeterminate. For example:

In this circuit, the voltage and current are not determined. The only equation one can write is:

But, we cannot determine what the current or voltage actually is since we have two unknowns and just one equation.

*Yes, in steady state, one might argue that it is the case here thus the remainder of the answer.

The equivalent circuit to the right of the resistor

It is straightforward to show that the equivalent circuit looking to the right of the resistor is:

In other words, for the purposes of calculating \$i_x(t)\$, one can replace the circuit to the right of the resistor with the above equivalent. Now, one can see by inspection that \$i_x(\infty) = 0\$

Steady state current is zero because, given that excitation is dc:

Regarding your comment of the current wanting to go through the outer loop, like some sort of feedback loop (since one current is a factor of the other, and they are connected to each other):

First you need to realize that the inductor on the right has zero effect, no matter what. This is because all an inductor does is generate a voltage across its terminals that oppose current changes. But the nature of a current source (dependent or independent) is that it will vary its voltage as much as required to make its defined current flow. So it will counter any voltage that may develop through the inductor. So you can put resistors, voltage sources, inductors, etc. in series with the current source, and they won't matter.

Once you see that, you realize that that right branch is just proportionally adding to whatever flows through the left branch. It becomes a current amplifier, and the output factor is 100 (=99+1, since the original current also flows through). The actual current value ix will depend on how the middle branch reacts to the voltage source + series resistor excitation, knowing that the current through them is being amplified by the 99ix "injection".

Alfred gave you an equivalent circuit with the cap 100 times smaller and an inductor 100 times larger.

This is because with a capacitor, the voltage effect of up-scaling the current is equivalent to down-scaling the capacitance:

So in this circuit, the effect of scaling the current is equivalent to scaling the components it feeds accordingly, in terms of the voltage developed across the 2 nodes that contain them.

If u(t) really is the unit step function, then first you should clearly say so, and second the current is clearly 0 in steady state from inspection.

In steady state, capacitors are open circuits and inductors shorts. The middle vertical leg of the circuit is therefore effectively not there. Now you have two current sources that must be equal and opposite, but the only possible converged solution is that they are both zero.

Not the answer you're looking for? Browse other questions tagged capacitor inductor circuit-analysis current-source passive-networks or ask your own question.