What is wrong with this simple SMPS?

I've been reading up on power electronics lately and as a challenge (and also a learning exercise), designed my first switching power supply - a buck converter in this case. 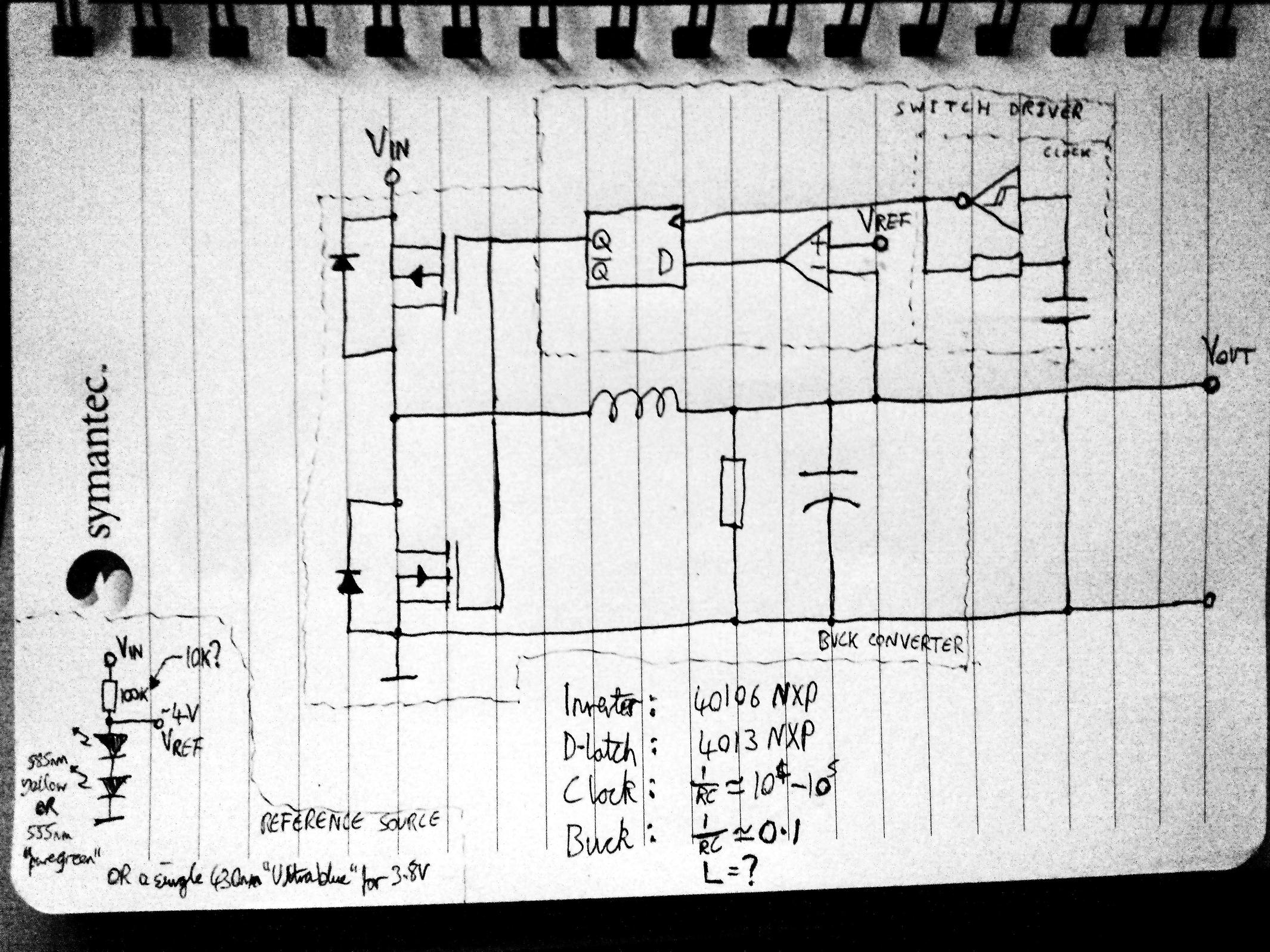 It is intended to supply 3.5-4.0V (decided by diode reference source) and up to 3A in order to drive some power LEDs with any DC source, ranging from a 5V USB charger up to a 9V PP3 battery. I want an efficient supply, as heating and battery life will be a real issue (otherwise I'd be lazy and use a 7805+diode).

NOTE: I already noticed that I've got the switching logic the wrong way round, I need to either swap the connections into the comparator or use !Q to drive the MOSFETs.

My choice of MOSFETs instead of BJTs was due to the power losses in a BJT, and the thermal issues arising. Is this decision to use MOSFETs over BJTs/IGBTs due to improved efficiency the right call?

Rather than using a PWM chip as many hobbyist forums suggest, I decided to use a comparator/clock/latch combination to rapidly switch between "charging" and "discharging". Is there any particular disadvantage of this approach? The CMOS latch (a D-flip flop) copies data to the outputs on the rising edge of pulses from the clock generator (a CMOS Schmitt inverter + feedback).

The choice of time constants / corner frequencies for the clock and the buck lowpass (10-100kHz and 10Hz respectively) is intended to support the small ripple approximation while also allowing the output capacitor to charge in a reasonable amount of time from power-on. Is this the right set of considerations for deciding the values of these components?

Additionally, how would I go about calculating the value of the inductor? I would assume that it depends upon the typical output current and the lowpass capacitor's value, but I can't quite figure out how.

In the past, I've used the shown MOSFET pair (in addition to software PWM) to create H-bridges for bi-directional, variable speed motor control - and as long as I kept the PWM period much larger than the MOSFET switching time, the power waste from shorting during switching was negligible. In this case though, I'm going to replace the N-mosfet with a Schottky diode since I've never used a Schottky diode before and want to see how they behave.

I use a simple inverter+RC combo to provide the clock signal as I don't need a particularly consistent or precise frequency as long as it is considerably higher than the high-cut corner frequency of the buck-boost.

Yes, there are stability issues and a brief moment when both FETs are on but the beauty of using a FET on the pull-down part of the circuit (i.e. a synchronous buck converter) instead of a schottky diode is this: -

I'd also advocate building a 555 timer sawtooth generator as the basis of your system. Something like this: -

What you get is a half-decent synchronous buck convertor that just needs an input to the other comparator input to get the required duty cycle changes. OK so far? Then you can apply a simple control loop that lowers the 2nd input to the comparator as the input voltage gets bigger. Get this working and then apply another small control loop that actually regulates the PWM with load current changes a tad and this would probably work and no negative feedback involved.

Then, as the final touch, and with care and subtlety apply an overall control loop to keep the output better stabilized but remember, with a sync buck you can pretty much get half-decent stable performance without control loops that use negative feedback - if you are wanting to go this approach I can recommend it.

However, for me, I'd just call on Linear Technology and get the device that already does the job.

Replace the lower MOSFET with Schottky diode in reverse.

Yes, using a MOSFET can increase the efficiency, but then the schematic needs special driver that to make dead time between switching transistors ON.

I use to calculate smps at http://schmidt-walter.eit.h-da.de/smps_e/smps_e.html

I already designed flyback as well as buck converters for LED lighting using this website, and it was every time the best solution. You find there the dimension for the coil you need (core & winding).

I think a better approach to generating the PWM signal is to actually build a proper control loop. It's not clear to me that your circuit will actually stabilize where you want it to.

What you should do is build a simple P or PI controller. Take your output voltage and your reference voltage and put them through a differential amplifier to get an error voltage. Then run this through a potentiometer so you can adjust the gain. If you want to make it more accurate, run it through another pot, an integrator, and then put both of these into a summing amplifier. This will give you an output that is proportional to the error and to the integral of the error, with adjustable gains. Then you run this to one input of a comparator. The other input of the comparator would be triangle wave from a relaxation oscillator. The output of the comparator would drive the MOSFETS, possibly with a MOSFET driver and perhaps some additional logic to prevent shoot through. You'll have to play around with the potentiometer settings to get the best result.

7
Why does this buck converter output such low current?