I have read few articles about transformers and they all point to the fact that they are excellent attenuators for common mode transients, but not for differential mode transients! One of this documents is the following: https://www.erico.com/catalog/literature/TNCR016.pdf

I am really having trouble to see why this is the case. Could someone please explain why transformers are good for common mode transient filtering, but they are not able to attenuate the differential mode transients?

Why? Consider Faraday's law of induction. It says, among other things, that the voltage \$v\$ across an inductor is equal to the rate of change of magnetic flux \$\phi\$ through it:

Now the two windings of the transformer are each around a common core, and that core is designed to contain most (ideally all) of the magnetic flux from the windings. Thus, the flux through either winding must be the same, thus the rate of change of flux is the same, thus the voltage is the same.

When one side (let's call it the primary, though it works in either direction) is presented with a common-mode transient, the voltage across the primary doesn't change. It's as if you tried to move current through a wire by attaching both ends of it to the (+) side of a battery. You may have changed the voltage of the wire relative to some other (unspecified) reference, but since the wire is isolated from whatever that other thing is, no current flows. No current, no flux, no change in flux, no voltage, no coupling to the other side. 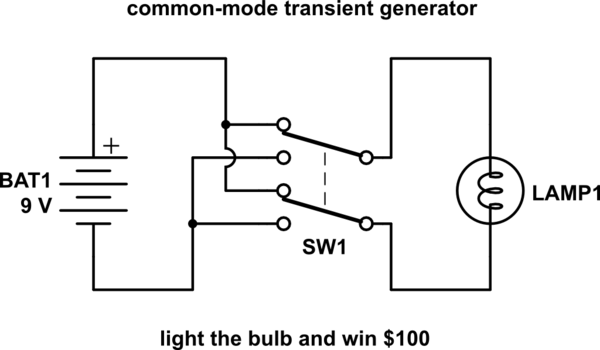 As long as the transient voltage wasn't enough to blow through the insulation, and you don't have any significant capacitive coupling, or other non-ideal effects, the common-mode transient essentially never happened, as far as the secondary can tell.

On the other hand, differential mode voltages do drive a current in the primary, thus as the current increases, flux increases, and this is coupled to the other side, resulting in the same voltage appearing there.

Others have explained why your premise is true in an ideal case. I'm here to explain why it is not true in many real cases.

Transformers are typically designed to minimize cost- so the core of a power transformer, for example, will be no larger than necessary under worst-case conditions. What that means is that the core is fairly close to saturation.

So, a small normal mode transient will indeed go through the transformer- say a 24V spike on a 240:18V transformer might show up as a 1.8V spike at the output. A 1000V spike might only show up as 10V rather than the 75V you'd expect. It's relatively easy to make a circuit withstand a brief 2V spike compared to 75V more than usual, so this is a useful characteristic. It's also why you should not connect a 120VAC transformer to 240VAC. The core saturates and the windings burn up.

The common mode situation is complicated by inter winding capacitance (SMPS transformers usually need tight coupling and often have the secondary sandwiched between primary winding halves), and often a BFC (big fat capacitor) Y-rated between primary and secondary (though it's external to the transformer proper). So high frequency common mode transients are conducted with series impedance Xc, where C is tens of pF to nF.

The principle operation behind a transformer is that it takes an applied voltage on one coil and produces an output voltage on the other coil. The output and input voltages are differential and this is what they do.

Common mode signals appear as exactly the same voltage on both coil ends of a winding therefore they are invisible to that coil and do not get passed thru to the secondary or other coil.

Not the answer you're looking for? Browse other questions tagged transformer differential attenuator or ask your own question.

0
Can someone please explain this attenuation setup?
6
Definition and Explanation of Insertion Loss and Return Loss
1
How do I get Ad and Acm for a BJT differential amplifier?
4
Why does isolation transformer protect from shock?
0
Common mode voltage elimination at differential pair receiver
5
sizing a DC bias RF choke for a differential antenna + PA
0
How do non-flowing common mode or bias currents cause common mode range to exceed/float?
2
Differential equations for a transformer
1
Differential filters: high pass, low pass, band pass
0
Why can't I get transformer output as written on the label?