AM radio interference with class A amplifier

I am using a class A amplifier constructed around an NPN Darlington transistor (BC517) because the gain I was getting with a single NPN transistor was nowhere close to what I needed. The transistor is biased with two 100K resistor going from collector to base and base to emitter. Instead of a load, I have a 10K resistor, a 100K resistor from the collector drives the input to a comparator (this class A amp is being used as the input stage to a ADC I built). The input comes from an electret mic coupled to the base via a .1uF cap (I have given the mic a proper voltage bias with a 10K resistor). There is some small radio interference with the ADC, which I know how to deal with, but the main problem is that I am getting a massive amount of interference from a nearby AM radio station with my class A amp. The radio waves are being picked up at about the same volume as the sound from the mic. This will not do, so how can I fix it? Should I use a different kind of amplifier (it needs high gain). Is there a way to suppress interference in my existing design? 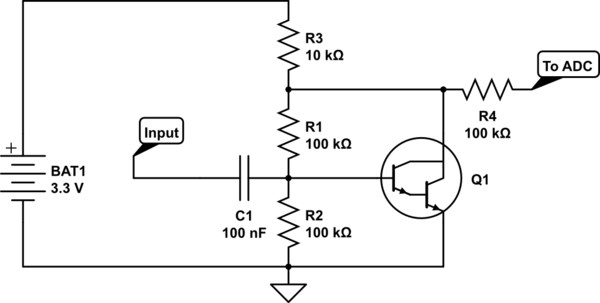 I think you are picking up AM radio interference because of the relatively high resistances you are using. High resistances make it easier for a low energy signal like a radio wave to imnpress a voltage on a circuit. I would suggest 2 remedies. One is to reduce all of your resistors by a factor of 10. Why do you need to put such a large resistor (R4) in series with your output? Another remedy is to put a small bypass capacitor across R2 to filter out the AM signal. If you reduce R2 to 10k, then a capacitor of about 200 pf should be sufficient. If you reduce R2 to 10k, then use a capacitor of about 2000 pf.