With reference to Vasiliy's answer on this question Why can't two series-connected diodes act as a BJT?

Can someone please explain Why this would happen ?

I intentionally didn't want to get into this level of details in the referenced question because this would further complicate the answer (which had already been quite complicated), therefore I'm glad you decided to ask a new question and not just post it as a comment.

Let us again restrict the discussion to the following configuration:

Indeed, this seems a bit strange: why can carriers be swept (diffuse) across a monolithic \$p\$ base in a NPN structure, but can't be transported between two adjacent \$p\$ sides of diodes via a metal wire? Why does metal cause such a difference?

The answer is rooted in the nature of metal-semiconductor contacts. Such contacts possess a rectifying behavior, which is very similar to the behavior of PN diodes. In fact, if you connect a metal to \$p\$ type semiconductor - the metal behaves like a very heavily doped \$n\$ type. You could call the resulting diode a \$N^{+++}P\$ diode, but they are more widely known as Schottky diodes. 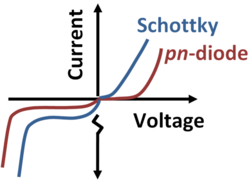 However, if each contact is equivalent to a Schottky diode, then why don't we take these diodes into account when analyzing even a standalone PN diode? This diode has two contacts, therefore it should be represented as a PN diode sandwiched between two Schottky diodes, right? Well, if this was the case then semiconductors would never get the importance they have today.

When the width of depletion region becomes very small, a quantum-mechanical effect called tunneling appears. In a very simplified manner, you can think of charge carriers as being capable of "passing right trough the wall" - they can disappear at one side of the junction and reappear at the other side. This effect allows charge carriers to overcome the rectification restriction imposed by a metal-semiconductor junction - they may now be swept in any direction across the junction. Since the rate at which carriers tunnel across the junction may be shown to have linear dependence on applied bias - these tunneling contacts are known as Schottky Ohmic contacts, or simply Ohmic contacts.

This is not directly related to your question, but it may come helpful to remember that these are the ohmic contacts which are used to connect the semiconductors which make up a device with the metal of the interconnections and leads (unless you are explicitly interested in achieving rectification). Therefore, the usual PN diode is composed by more than just two semiconductors regions: 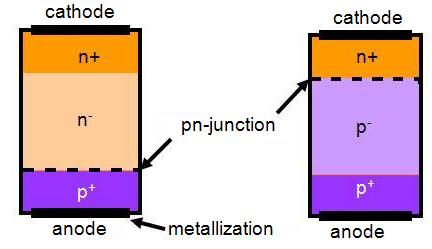 Up until now this was an introduction. Now you understand why did I skip this explanation in the original answer, right? :)

Now we have enough background to address the question: why can carriers be swept across the \$p\$ type Base, but not across the metal?

The difference here is that in NPN structures the carriers diffuse - they move as a result of concentration gradients. There is no need of any electrical field which will cause the carriers to drift towards CB junction. In fact, this diffusive motion is kind of "against the field" because the positive bias connected to the Base electrode "tend to attract" the electrons.

In two back-to-back diodes configuration, the electrons are capable of tunneling from the bottom diode into the metal wiring (due to \$V_{BE}\$), but there is no electrical field which will cause them to tunnel from the metal wire into the top diode. Why there is no electrical field? Because no matter what the voltage is across the reverse biased PN diode, it is dropped over the internal depletion region (which expands in order to "accommodate" this excess voltage). Therefore, no voltage drop across the contact of the top diode, and all the electrons which tunnel into the wire are swept to the power source (neglecting the leakage current of top diode).

A BJT is a N-P-N device taking advantage of the PN Junction that is key here. it isn't the fact that a piece of P-type and N-type are next door to each other, they are soo close (ie at atomic level) that there is migration at the Junction

A Diode as a P-N junction very, very quickly becomes P-dep-N as charge migrates. It is this depletion region that is responsible for producing the required voltage drop of about 0.6V. Reverse bias a diode and this depletion region grows UNTIL too much voltage has been applied and the entire device breaks down.

Now take a BJT: N-P-N. This VERY quickly becomes N-dep-P-dep-N which is again where the 0.6Vbe requirement comes from.
If you inject charge into the P-doped base, these minority carriers are swept up into the depletion region and fwd bias the B-E (which is akin to a diode), but in doing this the other P-E junction (C-B) is equally influenced.

Now if you take two diodes, two PN diodes and place them on a PCB what you get is:

--trace--N-dep-P---trace---P-dep-N--trace You are not producing a required P-N junction between the two attempts to produce a base. There is no miniority charge mobility.

Now shrink it down, get them closer and closer and closer, at substrate level and at some point you will start to have some form of charge migration occurring BUT the geometries are such that you are making an extremely poor doped N-P-N

Not the answer you're looking for? Browse other questions tagged semiconductors or ask your own question.

57
Why can't two series-connected diodes act as a BJT?
3
How can I create an SCR using a PNP and NPN?
0
In an NPN transistor, why doesn't current flow without applying a base voltage?

2
fundamental difference between a metal and a semiconductor?
3
Understanding reverse biased PN junction
1
Do the recombination of charge carriers cause the diode to stop conducting?
2
Potential drops in BJT in CE configuration?
5
Why can current flow through the reverse biased base-collector junction (N-P junction) in a BJT with a forward biased base-emitter junction?
4
Transistors why does increasing base current increase collector current?
0
Comparing sensitivity to temperature changes of BJT (transistor) circuits in Common Emitter Configuration
1
Is forward biasing or reverse biasing an inherent property of a diode?