How do ceiling fan controllers work?

I've heard people say "don't run a fan on a dimmer; you will start a fire", but don't say why. Yet, that Lutron sells this device expressly for fans suggests it is something other than an ordinary triac light dimmer, and that it's totally safe, but they also don't say why.

I also know when I bought this house, a different, uglier fan controller of a similar type was installed. Could it be that this ceiling fan is designed for this type of control, where others are not?

Can someone tell me, as an electrical engineer, exactly what these fan speed controllers do, electrically? How are they different from ordinary triac light dimmers?

I was recently (today) helping someone with their home renovations, including replacement of the three-speed fan controllers. The old one, which we ripped out and replaced, is shown below. Note the crude circuit diagram on the black box object (the fan speed controller.) 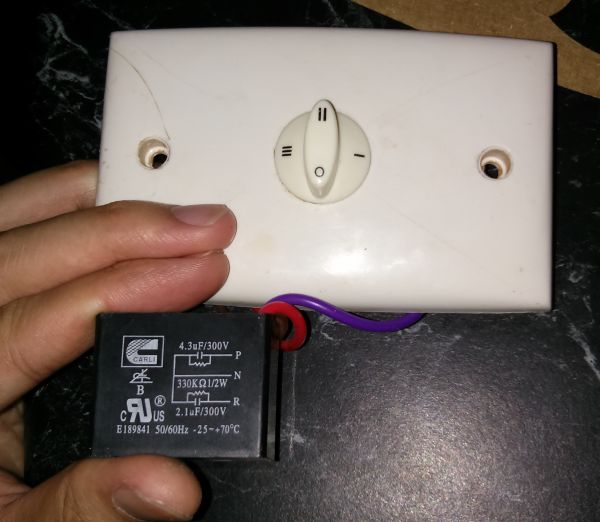 Here's a circuit diagram for a very similar three-speed motor controller by Clipsal. 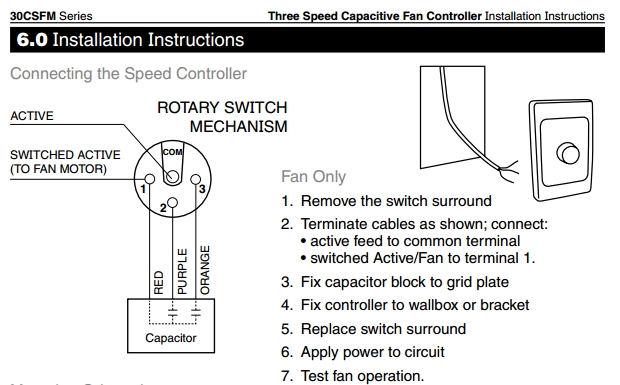 I don't understand single-phase induction motors well enough to state with certainly exactly how the extra capacitance modifies the speed of the motor. Sorry!

My understanding of light dimmers is that they do not control voltage but cut off the voltage during part of the cycle. A triac is different from a transistor in that it has only off/on states, you can turn it off, but a zero crossing resets it to on. So with a R/C timer you can turn it off sometime after the zero crossing and it will turn on again after the next zero crossing. Thus you are reducing the amount of time per cycle the power is on. This works fine for a light which will glow through the cycle and smooth out the power curve. A motor will vibrate because you are turning it on and off through each cycle and the coils/stator jump and create noise.

I don't know why this would cause a fire. Light dimmers are usually rated at 1500W so way more than the fan motor. But there may be some heat caused by the switching of an inductive load - just guessing, or heat in the motor coils from the irregular wave form?

There is a voltage drop across the capacitor. The amount of voltage drop is inversely proportional to the value of its capacitance. Using different values of capacitor in series with the fan motor will mean that different voltage levels are applied to the fan motor. The fan motor speed is determined by the applied voltage. Capacitors are used to achieve voltage drop because they don't create heat as would a resistor which would therefore pose a fire risk.

I am not an electrical engineer but I had this very problem. I was trying to control 2 ceiling mounted regular room fans with a lutron 3 speed box mounted fan controller (which I found later to be a problem because the combined amperage draw exceeded the switch capacity). The fans were multiple speed tap motors with no capacitor. With the fans switched to high and the wall controller to high they worked fine. When I switched the controller to the medium setting (44 VAC), the fans would quit working, also on the low setting (26 VAC). So then I opened up a celing fan to find that it was a single tap fan motor with a capacitor controled with a black box for the speed. So my theory is that a multi speed tap fan motor will need some sort of capacitor inline with the high speed winding circuit (5uf?) in order to operate at the lower voltages of the medium and low switch positions. Without the capacitor the voltage does not have enough balls (for lack of better term) to keep the fan motor turning at reduced voltage. Also the fan controller has a current rating of 1.5A, and a light controller has a current rating of only 600W, I think that is where the fire hazard comes into effect.

Since A/C motor speed can only be controlled by changing the frequency of the supply, I have to assume that the transformer in the controller was the first stage of power control and the fan has a rectifier and a D/C motor. This is a guess, but it is the only thing that makes sense and it would be a very efficient way to control a fan.

Ceiling fans have a higher current rating than lights, and higher current means more heating (heating caused by current is proportional to the square of the current). Fan controllers would be equipped to handle greater amounts of heat, while light dimmers which typically operate at lower currents would burn due to overheating.

As far as device operation is concerned, both fan speed control and light dimming basically involve controlling the amount of energy that is supplied to the load (lights/fan as the case might be). The circuitry of the regulator/dimmer has the overall effect of a switch, whose action can be controlled to regulate the amount of energy supplied to the load.

Not the answer you're looking for? Browse other questions tagged fan motor-controller or ask your own question.