Change taps on primary or secondary side of transformer?

My intuition tells me that it makes more sense to select the primary side, but I'm not certain.

Will there be any side-effects of selecting one or the other? Are there any reasons for choosing to change the settings on the secondary side?

I believe this is for economic reasons (it's cheaper or easier to build it this way). However I haven't looked this up so treat the previous statement with a grain of salt. The J&P Transformer Book, originally my Martin Heathcote, is all about the details of design, construction, and maintenance of power transformers and could probably tell you more.

To give a more concrete example, here is an example of a transformer nameplate showing the possible tap positions. (Serial numbers have been obscured to protect the innocent.) 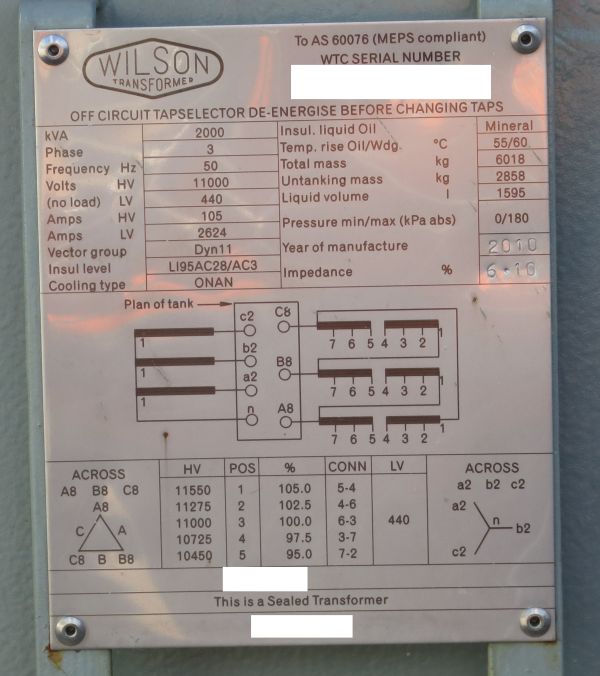 Your intuition is correct i.e. the tappings are provided on the primary side chiefly for these two reasons: (1) Current is higher on the secondary side and hence sudden changing of the tappings would lead to arcing problems. (2) The HV winding is wound over (outside) the LV winding to minimize the cost of insulation. This implies that the terminals on the primary (HV) are easily accessible compared to secondary.

Losses would be about the same on both sides, because the secondary has fewer turns of thicker wire. I would think arcing, if anything would be worse on the HV side if changing taps live unless the switch if oil filled. As far as DY YD DD YY goes, it makes no difference. The impedance line to line would be slightly higher for Y, as the voltage is made up of two vectors that are 120 deg. apart instead of 180, but I don't know what that has to do with the switching. In most countries (except Canada & Alaska where they run HV 3 phases & a neutral) all those big 3 phase transformers would be DY because the HV supply has no neutral. I would suggest changing primary taps to compensate for supply voltage variation, & secondary to compensate for loading of the transformer. If it's one or the other, do it on the primary, as the load causes resistance voltage losses in both the primary & secondary.